The real take-away from Net Applications' May 2013 release of NetMarketShare monthly operating system statistics is that, as PC sales continue to collapse , Microsoft's Windows 8 could be a factor behind the plunge. 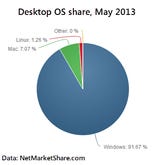 The latest numbers from NetMarketShare show that the PC market might be slowing, but it's not changing much. Windows 8 is growing its share as people replace their old PCs, and despite vocal threats, no one appears to have replaced their Windows PC with a Mac or Linux.

True, on the desktop, Windows 7 still ranks as the top operating system with 44.85-percent of all PC users, followed by the still popular Windows XP with 37.74-percent. Vista—yes the never-loved Vista—comes in at third with 4.51 percent. Despite the fact that finding and buying Windows 7 PCs has become increasingly more expensive and difficult, just try finding one in a retail store, Windows 8 share is growing but still comes in last at 4.27 percent.

Worse still, Windows 8's month-over-month growth rate is lagging further and further behind Vista's dreadful 2007 adoption numbers. When comparing the operating systems when they were first launched, Windows 8's adoption rate in its first month trailed Vista by just over half-a-percent among PC buyers. Now, in their 8th month out, Vista's market-share numbers now lead Windows 8 by 3.64 percent. Needless to say, both lag far behind XP and Windows 7's numbers at similar points in their product life-cycle.

I suspect things will only get worse for Windows 8.1 (Blue). Windows 8.1, promises to address some of users' concerns about Windows 8. But will it address enough of them?

For example, if all the reborn Start Button does is give you another way into the unpopular Metro interface, will Windows XP and Windows 7 users really care? No matter how good Windows 8.1 turns out to be, it seems likely that businesses will hold off on buying any version of Windows 8 until Blue is available in the fourth quarter of 2013.

Some would argue that since NetMarketShare changes how they measure browsers and operating system market share from time to time based on changes in Central Intelligence (CIA) population data that you can't fairly compare NetMarketShare data from year-to-year, especially as far back as 2007 .

You could argue, as  NetMarketShare rival StatCounter does, that  "Weighting stats means that the stats are only as good as the weighting methodology used. If the weighting data is inaccurate or out of date, then it renders the data completely incorrect." Further, StatCounter finds NetMarketShare's CIA-based data massasging to be "vague and inconsistent."

So why use NetMarketShare data at all? Because, for better or worse, it's the most commonly used metric for operating-system and Web-browser share. Thus, to the best of the available data, I'm trying to compare, if not identical apple to apple varieties then  Granny Smith to Red Delicious apples. While you can't expect it to be completely accurate, the numbers do indicate significant trends.

In the greater end-user market, as Mary Meeker, the well-regarded analyst and venture capitalist, pointed out in her May 2013 Kleiner Perkins Caufield & Byers' 2013 Internet Trends report, Windows is on the decline no matter how measure it. Apple iOS and Android now have the lion's share of computing devices, including PCs, smartphones and tablets, with 65-percent share over Windows' 35-percent. Mark Shuttleworth, Ubuntu Linux's founder, was on to something when he declared that Ubuntu Linux's first bug, that "Microsoft has a majority market" was now closed .

NetMarketShare's mobile operating system statistics show Apple iOS holding the lead with a strong 59.49-percent, followed by Android with 24.4-percent. Java ME, with 10.2-percent and Symbian with 2.06-percent, which aren't even smartphone operating systems bring up the rear.  Below these  we find the once mighty Blackberry OS, with a mere 2.06-percent, and all combined versions of Windows Phone with a tiny 1.21-percent.

Some would argue that comparing mobile and desktop operating systems is like comparing apples and oranges. A more apt comparison is horses and cars. Both provide you with transportation. Experts say PCs and their operating systems are on their way out. Microsoft, a buggy-whip manufacturer, might disagree with this analogy.

Will Windows no longer matter? Of course not. Some users will always need PCs and most of them will stick with Windows. The question for Microsoft today is "Will anyone want Windows 8?"