HP and Dell have seen their target price lowered after Windows 8 was dubbed "a disappointment" in an analysts note.
Written by Zack Whittaker, Writer-editor on May 17, 2012

Analysts are warning PC makers that Microsoft's upcoming operating system may not prove as successful as they may have hoped.

The news should come as no surprise considering the tepid reaction to Windows 8 in the past few months following Microsoft's pre-release previews to developers. Analysts are expecting the knock-on effect to hit PC makers as much as it will hurt Microsoft, and lowered their price targets on both HP and Dell.

BMO analyst Keith Bachman did not pull any punches when he said: "Windows 8 will prove to be a disappointment, at least out of the gate." 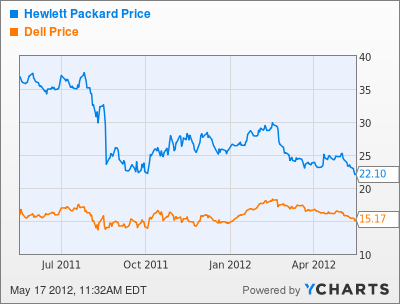 HP, trading at around $22 a share, is expected to see its stock rise further than Dell, but had its target price cut from $33 to $27 showing missed potential.

BMO cut Dell's target price to $18 from $20. Dell is currently trading at just over $15 a share on the Nasdaq.

HP still holds the crown as the world's biggest PC vendor with 17.2 percent of the global market share, according to Gartner. Dell holds the third spot in the global rankings at 11 percent behind Lenovo's 13.1 percent.

But HP and Dell, along with other PC makers, are hoping Windows 8 will boost sales. There's almost no doubt that the new release will bump the numbers but will likely not have the impact that previous iterations of Windows did.

Analysts have made it crystal clear that they do not expect Windows 8 to be as popular as Microsoft would hope, and thus the PC market will take the brunt end of the stick.

PC sales have performed poorly for most of 2011, yet still managed to scrape a 1.9 percent increase on worldwide shipments.