Microsoft has finally made the official announcement about the next version of Windows Mobile – Windows Phone 7 Series – but there’s a long list of questions that Microsoft says it won’t answer until the MIX conference in March. In the meantime, here’s what we do know about the phones that will be on sale for ‘the holiday season’ (which to US companies starts in October or November).

The name: Windows Phone 7 Series is the best way Microsoft could come up with to say that (despite persistent rumours) they’re not manufacturing phone hardware themselves or putting the Microsoft name on it. Oded Ran from the Windows Phone team in the UK told ZDNet: “Many of the consumers we’re speaking with are not necessarily aware of Windows Mobile and we do not want them to think Microsoft is launching a Windows phone. ‘Series’ also says there are different form factors. It’s just like when you buy a Windows PC; you don’t think Microsoft manufactures it. ‘Series’ was the best word we tested as being able to convey that.”

The interface: The look of the Windows Phone 7 Series prototype demonstrated at Mobile Word Congress is has many similarities to the Zune HD, but that doesn’t mean it’s based on the same code. The visual design is a style that Microsoft is calling ‘Metro’ internally, which Ran told us is a reference to the clarity of information and typography on the signs you see at train stations and Joe Belfiore says has its roots in Windows. (Despite the use of sub-pixel positioning to give extremely clear text, even in Web pages, even when you zoom in, it’s unlikely that there’s any connection to the XPS device independent rendering and printing technology introduced in Windows Vista which also had the codename Metro – and more likely that he’s referring to the Media Center interface in Windows 7.)

When you pick up a Windows Phone Series 7 device, the first thing you’ll see is the Lock screen, showing the time and date, plus details like the number of unread messages, missed calls or your next meeting. Swipe your finger to unlock the phone and you see the tiled Start ‘experience’; some of these animated tiles are shown by default, like email, others you can customise.

The Start experience, with animated tiles - including the Me tile

In general the interface uses an ‘app bar’ of icons and commands at the bottom of the screen rather than menus (what Microsoft calls the ‘chromeless’ interface) or press-and-hold context menus, but the software does support press-and-hold – on the Start screen this gives you Zune HD-style heart and broken heart icons for adding and removing tiles. There’s also an alphabetical list of all apps, like the current Start menu (although this is a list rather than the ‘honeycomb’ grid of Windows Mobile 6.5).

The different ‘hubs’ for people, pictures, Office documents and so on reflect the same design style, but the uncluttered screen isn’t just about making it easier to glance at your phone and see things clearly and quickly because there are only a few things on screen. You can only see five emails at once in the inbox, five documents listed in the Office area at once or or five names in the address book at once because the sensor areas in capacitive screens are around 8mm in size – so you simply can’t hit smaller buttons on screen. 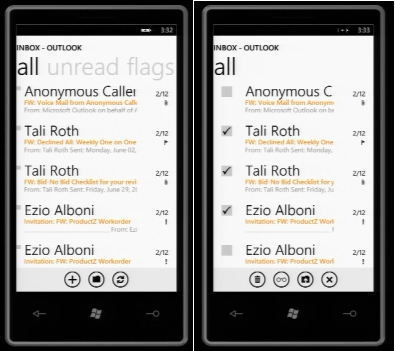 You get very clear information on screen – but less of it

Sync software: Microsoft is keen to emphasise that a lot of the information you want to move onto your phone will come from the cloud, like getting photos from your Windows Live gallery or seeing updates from services like Facebook in the People hub, but the Zune PC software will be the way you sync files, music and photos from your PC, instead of Windows Mobile Device Center. “It’s the superior way to manage music and videos; obviously we’ll have to incorporate other elements in the Zune software,” Ran told us, promising some of the information will come at MIX. The Zune Marketplace will be available “in the countries where we launch Windows Phone 7 Series” and Ran emphasised that this will not be limited to the artists in the US Zune marketplace today. It won’t be the only option, he confirmed; “there are going to be questions around how use the phones with other music software and there will be answers”. 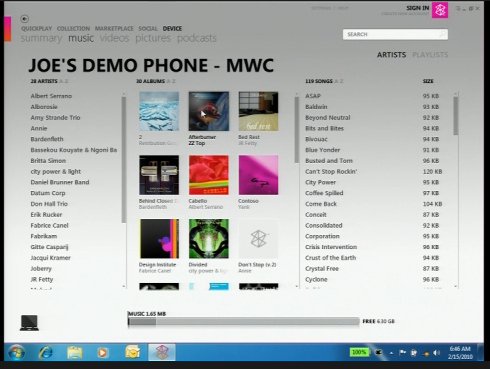 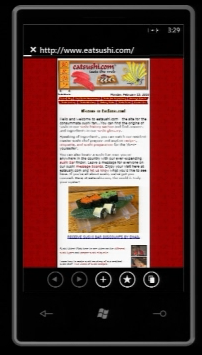 The new IE Mobile: somewhere between IE 7 and IE 8

The browser: there’s a new version of Internet Explorer Mobile, with tabbed browsing. Belfiore describes it as “a more advanced browser than any we've shipped on the phone before, based on desktop Internet Explorer code so it’s compatible with a large number of sites”. 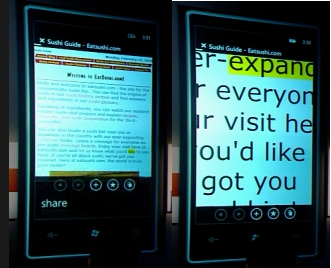 Flash: Although Andy Lees told our sister site CNET that “We don't support Flash. Performance on Flash is a problem. So we don't do that.” Speaking to ZDNet today, Oded Ran ‘clarified’ that by saying “We have absolutely no problem with Adobe Flash. When you bring a product to market you need to make hard compromises in terms of what you bring [in the first version]. Flash didn’t make into the v1 but I think it’s something were going to keep [people] posted on. You have to decide what you can have from the get go and what might come a bit later. Flash is absolutely important to the Web; we’re saying not now, not ‘not ever, not any time’.”

The hardware platform: there will be a minimum specification for Windows Phone 7 Series devices, which Microsoft hasn’t yet released publicly (“the nitty gritty details of hardware we’re not sharing at tis time,” confirmed Ran; “we’re going to share more at MIX and after”). What we do know from corporate vice president Joe Belfiore is that all devices will have a capacitive screen with four points of contact (so you can use up to four fingers on screen at once); the prototype at MWC has a 4.1” screen – and a keyboard is optional. Devices will use either OLED or LCD screens; the OS is optimised for both the familiar black on white text and Zune-style light text on dark, which saves battery on OLED screens.

All phones will have built-in GPS and an FM radio tuner, and there will be a minimum megapixel level for the camera (although again, we don’t yet know what this will be). There will be three buttons on the front: Back, Start and Search, which launches an interface to Bing or searches within an experience depending on where you are (so you’ll press the Search button to search emails or contacts). All phones will also have Power and Camera buttons; senior program manager Michael Change commented on Twitter that these will be the only hardware buttons, but that may not rule out Zune-style volume controls. 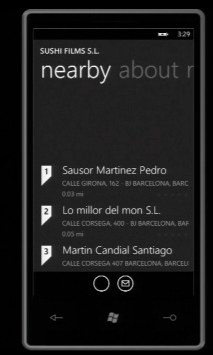 Qualcomm has announced that it will be “the first chipset company” support Windows Phone 7 Series with the Snapdragon platform and says it’s working with “multiple device manufacturers”. That implies that other chipsets could be used, like the NVIDIA Tegra processor that powers the Zune HD, although Microsoft wants to avoid compatibility issues and it wants to reduce the amount of time it takes phone manufacturers to take the Windows Phone operating system and create a device with it, so a single hardware platform has advantages.

Because of the minimum specification, it’s unlikely that you’ll be able to upgrade existing Windows Mobile devices to Windows Phone 7 (although the HTC HD2 has a capacitive screen, it doesn’t have four points of touch).

The apps and the developer story: This is what Microsoft keeps telling us will not be discussed in detail until the MIX conference, although Microsoft has been talking to key developers.

Customisation: Speaking at MWC, VP Andy Lees implied that phone manufacturers and operators would no longer be able to replace the top-level screens with their own interface (as HTC does with the TouchFLO interface today) but promised that the hubs would be extensible. This still seems to be an area for negotiation, from what Oden Ran told us. “On one hand we have the clear need for consumers and developers and the ecosystem, for something that's recognisable and repeatable - so that when we speak about how a consumer needs to get an email or an app or photo, it is the same. But it’s a very slippery slope if everyone has to do the same and the operator or the hardware manufacturer can’t show what they're capable of. We’re building Windows Phone 7 Series and we licence it and it’s very important not to compete with operators and what they’re, doing not to compete with the hardware manufacturers and let them do what they do. It’s essential that we do let them do a certain amount of differentiating themselves; how it happens we'll have to see.”

Developers can add features to the hubs, but can they replace them? Ran says Microsoft will release a set of frameworks that allow developers to build their own apps within the framework. “If a developer has this this fantastic idea for anything involving pictures, music, whatever – they’ll be able to do it.”

Apps: We don’t know yet whether any existing Windows Mobile apps will run on the new OS; Windows Phone development manager Charlie Kindel said on Twitter that it’s based on a new version of Windows CE (but that the version number doesn’t matter) but the new style of interface and the fact that you can’t easily hit small buttons on a capacitive screen mean that even if an app will run, the interface may be a problem. There will be a version of the Windows Marketplace but we don’t know if this will be the only way of installing applications.

Multitasking: there won’t be a definitive answer on this until MIX. Michael Chang said on Twitter that “multitasking is not black and white”. Push email and cloud interfaces will mean information can be delivered to the phone while you’re doing other things and Oden Ran confirmed to us that “you will absolutely be able to listen to music and check email or take phone calls and check a Web site – and for a majority of consumers this is what multitasking is for”.