Full Bio
Posted in Between the Lines on October 7, 2013 | Topic: Mobility

iPad is both the stereotype and much of the reality of technology in education. It's far from the whole story. Many school systems and universities have chosen Windows over the years, and now some are choosing Windows 8 tablets over iPads. There are good reasons for doing so.

Last week I spoke with two education technology chiefs who chose Dell Windows 8 tablets for their deployments. They're happy and they say their students are too. 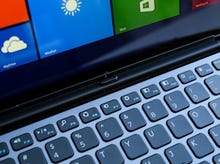 From the school IT's point of view, probably the most appealing feature of Windows tablets is that they plug right into the existing infrastructure. When you introduce iOS and Android into an enterprise network you need to create a new, separate management system for them. These products are generally known as mobile device management (MDM), and you can do a lot with them, but they are completely separate from the rest of your user and network management.

Windows tablets, on the other hand, are PCs; they can be managed with System Center or any other of the usual network management tools. (This goes only for real Windows devices, not Windows RT, which is not network-manageable.)

At the same time, being Windows devices, Windows 8 tablets can run the Windows software that the institution probably already uses, most importantly Microsoft Office.

The Clear Creek Independent School District near Houston (and home to NASA's Johnson Space Center) is in the middle of a rollout of Dell Latitude 10 tablets. Every student in the grade 4-12 district of 40,000 students will get one of the devices, and they expect to be fully deployed in 2 years.

Southern Illinois University (SIU) in Carbondale is starting their rollout of Latitude 10's with incoming freshmen and faculty. They hope to deliver the devices to all 2700-2800 students and 500 faculty and staff quickly. They've written a suite of programs for them and are digitizing all their materials.

I have a Latitude 10 and one of the things I love best about it is that Dell makes a docking station for it to which you can attach a wired network and monitor. Combined with wireless mouse and keyboard it easily turns the tablet into a full desktop PC.

Dell didn't do everything right with the Latitude 10; the device cries out for a clamshell keyboard case like the one it made for their consumer Windows RT tablet. The company has addressed this deficiency in their recently-announced Venue tablets .

In light of the problems the Los Angeles Unified School District recently had with their iPad deployment , I asked both schools about their attitude towards locking down student devices. Obviously it's more of an issue for Clear Creek than for SIU which only has college students. Clear Creek is applying more restrictions for younger kids than for older kids, but overall both schools say they aren't especially locking the systems down. Both Clear Creek chief technology officer Kevin Schwartz, and SIU chief information officer David Crain, say that part of the idea of the program is to teach students to be good digital citizens.

Schwartz and Crain say that, for a variety of reasons, the total cost of ownership for the Latitude 10s was millions of dollars less than iPads. And they don't think that they "settled" for the Latitude. They did a "bake-off" between the Latitude 10 and iPad, and Dell clearly won.

Much of the software they use, even the online software, doesn't work on the iPad. Combined with the inclusion of Office (especially OneNote — they love OneNote) and the low-friction addition of the tablets to the schools' infrastructure, and it's clear that Windows 8 is a better solution for them.

Join Discussion for: Windows tablets in education: They plug right...