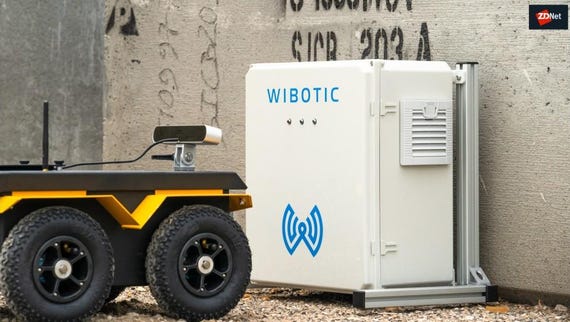 A company called WiBotic, which makes advanced wireless charging and fleet energy management solutions for technologies like drones and industrial robots, announced a major partnership to develop wireless charging solutions for robots on the moon. WiBotic will join in the $5.8 million contract with space robotics company Astrobotic, Bosch, and the University of Washington as part of NASA's 'Tipping Point' program.

"We're thrilled to have been selected by Astrobotic and NASA to deliver wireless charging capabilities to the next generation of lunar vehicles," says Ben Waters, CEO and co-founder, WiBotic. "While WiBotic specializes in wireless charging for military, industrial and commercial robots in all sorts of punishing environments here on Earth – from large warehouses to dusty deserts and corrosive saltwater – this is our first chance to take our technology into space. We're excited to work closely with NASA and be part of the next chapter of space exploration."

WiBotic has been one of the companies leading the way in industrial wireless charging, which has a special focus on automation technologies like robots and drones. Earlier this year the company got a big vote of confidence from the FCC when it was granted equipment authorization for high power transmitters and receivers, which provide up to 300 watts of wireless power. It was the first time the FCC had granted approval of this sort of technology for use in mobile robots, drones, and other devices with larger batteries.

In its new extraterrestrial brief, WiBotic will be developing rapid charging systems for lunar robots, including the Astrobotic's small CubeRover. Another partner on the project, Bosch, will contribute software expertise in wireless connectivity and intelligent AI, and the University of Washington will help with testing and validation.

Inductive charging could have a major role in the future of a host of different technologies, and it's highly attractive for space, where solar has limitations and docking and redocking to charge is impractical as it adds complexity to missions and introduces the potential for devastating charging errors. The technology works the same way those charging pads for phones work, only on a bigger scale.

"By coiling the wire, and changing the number of coils between the primary and secondary wire, electrical energy of one voltage can be converted into another voltage. This is the principle behind electrical transformers -- and is essentially the same concept behind wireless inductive charging."

Transmission range is a function of the size of the coils, meaning it can be flexibly adapted to suit various applications, even space.

Believe it or not, lunar landers and exploration vehicles have traditionally been powered by technologies that include small nuclear reactors, as well as solar arrays. But robotics is always a compromise between power and weight, and for long lasting power tethers and large battery banks have always been necessary, which limits range. Cables are also a known weak point on the inhospitable lunar surface.

The idea here is that WiBotic's proximity charging solution would allow robots to wirelessly charge from a base station or inside lunar landers distributed across the surface. That's highly attractive to NASA under its Artemis Program, which aims to explore more of the moon than ever before in advance of possible human habitation.

Practical benefits to the charging stations include keeping robots warm during frigid lunar nights and making it easier for astronauts to navigate on the moon and manipulate their equipment by cutting the cord.

"Bringing wireless power technology to the surface of the Moon and beyond is a game changer in the way space robotics systems have traditionally interacted," says Cedric Corpa de la Fuente, Electrical Engineer for Planetary Mobility at Astrobotic. "For instance, by removing dependencies to solar charging, a new wide range of opportunities for smaller and lighter systems becomes available for missions that were not within reach before - such as survival of lunar night missions. Just like Astrobotic's CubeRover, WiBotic's wireless technology platform is scalable and supports a wide range of power needs. This makes the end product very appealing not only for companies but also for all new space electrical systems and infrastructures."

"Our longer term vision is to pioneer a lunar wireless power grid to supply energy for a wide range of both manned and unmanned vehicles, irrespective of their individual battery types, voltages or required power levels," says Waters. "This is only the first step in creating a common infrastructure of wireless charging stations and Fleet Energy management software to be deployed across the surface of the moon."

Join Discussion for: Wireless charging on the moon