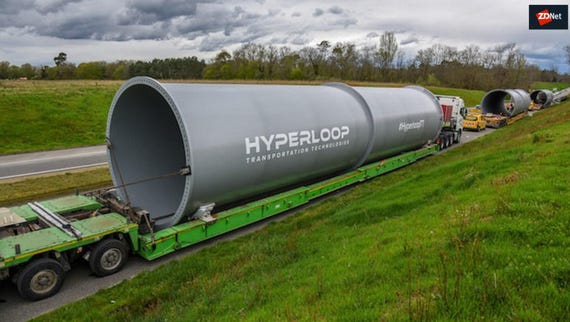 Video: HyperloopTT will build a test track in France this year.

French startups are increasingly expanding into the US, while US companies are more frequently diversifying operations into France. Recent examples include IBM, IPsoft, and Cambridge Blockchain.

Back Market's launch into North America early in 2018 was followed by the refurbished electronics marketplace raising $48m shortly afterwards. The company facilitated $120m in sales in Europe in 2017, and this year those figures are set to double.

In 2015, BIME Analytics was acquired by Zendesk for $45m, and Sigfox, Delair, Shapr, and Criteo are other French startups currently demonstrating expansion success in the US.

Should these trends continue, it's likely to become a more common business model for globally focused French startups.

At Eureka Park, the startup hub of the show, France was the second most represented country after the US with 272 French startups exhibiting, up 33 percent from last year.

"The French government has been very aggressive in driving startup growth and it's certainly paying off," says Gary Shapiro, president and CEO of the Consumer Technology Association, which produces CES.

"American consumers embrace new technology. We crave it, in fact, and foreign companies can succeed in the US if they understand our consumers, culture, and habits."

In terms of US venture-capital investment in French companies, the figures, overall, have been growing year over year.

Why US investment is increasing in French startups

Luca Verre, the founder and CEO of Prophesee, which develops neuromorphic vision systems, believes that the amount and frequency of US investment is increasing in French companies for several reasons.

"The French ecosystem is getting more solid and more visible, and a lot of French companies end up transferring their HQ in the US or at least opening an office in the US after series A or B," he says.

As seed and series A capital is increasing in France, Verre says this growth enables startups to reach a good level of visibility and scale.

Brexit is also having an effect. "The barycenter of the City is now moving towards continental Europe," he explains. "Paris has a strong gravitational effect around the CAC40 [benchmark French stock market index]."

He sees many companies implementing R&D facilities in France, from Facebook's AI lab in Paris, to Google's R&D facilities and Hyperloop's R&D facility in Toulouse. Malekzadeh highlights France's infrastructure and quality of education as its two largest strengths.

One of the issues he sees with France is that it's a big enough market for companies to do well and as a result it can sometimes be less motivating to go outside.

"If you compare with the Israeli market, it's so small you have to think outside from the beginning. But here in France, if you look at Free, Xavier Neil's company, it's doing tremendously well and has never had to expand internationally."

Pascal Cagni, ambassador for foreign investments and chairman of Business France, says there are multiple factors behind the momentum in France.

The tax credit and strong leadership of President Macron are two key factors, he says, along with French skills in software programming, mechanical engineering and design.

He refers to a 2017 Pramex survey that showed a 37 percent increase in the number of startups expanding their projects globally, with the US as the number one location.

"With the help of programs such as Business France's, it's easier now for startups to expand internationally," he says.

Prepping French startups for US expansion

Cagni is referring to the success of programs such as the French Tech Tour and Impact USA. StephaneAlisse of Business France in North America says both have one goal: to turn French startups into global forces in their field.

"The American market is critical to achieve this ambition," says Alisse. "It offers the largest consumer market on earth with a GDP of $18 trillion and 325 million people. Household spending is the highest in the world, accounting for nearly a third of global household consumption."

The French Tech Tour allows French startups to perfect their go-to-market launch strategy in two weeks. It launched 12 years ago and now has over 170 alumni, such as Criteo, Bime, and Multiposting, now part of SAP.

Impact is a 10-week on-site acceleration program, with a two-month online preparation period, which trains startups to launch in the US. Of the 48 startups accelerated since 2014, 80 percent are now established in the US with over $169m raised overall after completion.

"French startups launching in the US face multiple challenges," explains Alisse. "One of them is making sure their offer is localized and ensuring they have the same level of velocity as their American counterparts. Companies launching in the US need to adopt a very pragmatic approach."

Malekzadeh, who has been living in the US for 20 years, says he's seeing both an increase in quantity and quality of French companies coming to the US. Having been involved with Business France as a mentor, he says two of his investments in the past year have been in companies from the Impact program.

"The US is generally a far earlier adopter than Europe might be," he says. Malekzadeh explains that US subsidiaries of French companies are more positive about trying a startup's technology than the French headquarters might be.

"Culturally, US corporates are welcoming new tech and startups and they're willing to pay for the product and make sure that product survives and grows," he says.

Better exits are another reason to make it in the US. "Today 80 percent of our exits are in the US, so part of the motivation to go to the US is that you'll get a better exit here," he explains.

Ecosystem integration for US success

French innovator Geraldine Le Meur, founding partner of The Refiners, a San Francisco-based Seed Fund Program helping foreign entrepreneurs make it in the US, says being truly ready for the American market is crucial.

The Refiners' 12-week program focuses equally on strategy, networking and fundraising, which helps startups expand and create a footprint in the US.

For Le Meur, being one of 300-plus startups at CES isn't necessarily a positive position if the startup isn't ready or able to integrate into the US ecosystem.

"Are you part of the ecosystem or not? If you are not, especially if you're a startup, it can harm your business," she warns.

"I'm not sure bringing 300 startups at CES is best for the ecosystem," she says."In San Francisco, it's about being embedded in the ecosystem. My thing at Refiners is to be able to help French companies go global, to build a team here and take the best out of each [US and European] ecosystem."

While individual startups will experience expansion with varying levels of success, Malekzadeh says overall he's seeing more French entrepreneurs with an international view who can address the global market.

"So far, most of my investments [at Partech] have been in French startups," he says, "even though I live in San Francisco, and I look at both ecosystems."

Startup Republic: How France reinvented itself for the 21st century by wooing entrepreneurs to Paris

The City of Light is cutting through a long tradition of government bureaucracy to make it easy for global companies to launch in France. Steve Ranger went inside the phenomenon.

Consumers will be given financial incentives to make the change.

One track will be ready this year, followed by another in 2019 aimed at developing superfast rail technology.

Rapid urbanization is leading to smarter cities that improve the lives of citizens through technology. This comprehensive guide details the important aspects of a smart city.

The software giant says it's focusing on an underrepresented group.

Join Discussion for: ​With Brexit lurking, are French startups...