One track will be ready this year, followed by another in 2019 aimed at developing superfast rail technology.
Written by Steve Ranger, Editorial director, ZDNet on April 12, 2018 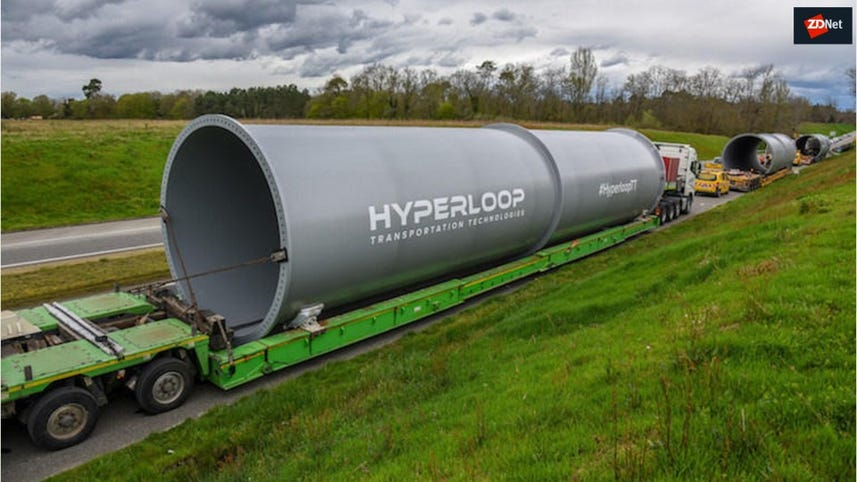 Video: HyperloopTT will build a test track in France this year

One of the companies racing to make hyperloop technologies a reality, Hyperloop Transportation Technologies, has said it will build a test hyperloop track in France this year with a second larger track due in 2019.

Hyperloop is an in-development transport technology that promises journeys as fast as air travel and cheaper than getting a train. The pods carry passengers or freight travel through tubes or tunnels, from which most of the air has been removed to reduce friction. This should allow them to travel at as much as 750mph -- in theory: while hyperloop technologies have been mooted for many years, no-one has yet managed to turn them into a viable business.

HyperloopTT said the first set of tubes for the test track have arrived at its research and development center in Toulouse, France.

With an interior diameter of 4m, the system is big enough for passenger capsules and shipping containers. The first phase includes a closed 320m system which will be operational this year. The company also said the passenger capsule, which is being built in Spain, is due to be delivered to the site in the summer.

The company said that a second full-scale system of 1km, elevated by pylons at a height of 5.8m, will be completed in 2019.

See also: What is Hyperloop? Everything you need to know about the race for super-fast travel

HyperloopTT CEO Dirk Ahlborn said: "Hyperloop is more than just displays of rapid acceleration and more than just breaking speed records. The real opportunity is to create an efficient and safe system with an unparalleled passenger experience."

HyperloopTT is just one of the companies looking to turn hyperloop technologies into a commercial reality.

Rival hyperloop company Virgin Hyperloop One already has a 500m-long DevLoop, which has a diameter of 3.3m and is located 30 minutes from Las Vegas in the Nevada desert; Elon Musk's SpaceX has its own Hyperloop test track at its headquarters in Hawthorne, California --it's about one mile long and with a six-foot outer diameter.

Virgin Hyperloop One sets a speed record and lands $50m in financing.

The man of many projects wants to speed his transport concept up to half-Mach then hit the brakes. The result should be one heck of a high-speed stress test.