Next year will mark the 50th anniversary of that mainstay of computing, the mainframe.

Back in 1964, IBM rolled out the System/360 — the first computer that was compatible and upgradable. In other words, while all computers until then were different, any System/360 would work with any other System/360.

The mainframe has stood the test of time — but in the age of cloud computing, can the mainframe still be relevant?

Certainly SHARE, the IBM user group, remains firmly of the opinion that the mainframe has a future. According to SHARE member Janet Sun, writing in the user group magazine in May, this user group can claim a membership of 20,000 individuals from nearly 2,000 companies around the world and highlights a few mainframe stats: 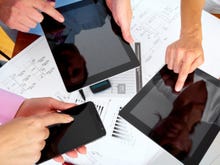 Here's what is really worrying CIOs, right now Wondering what issues are really setting the CIO agenda and keeping tech chiefs up at night? Here's a list from CIOs themselves - and yes, BYOD and cloud are on there.

So on these figures, there are quite a few mainframes still hanging around and they are doing an awful lot of processing. But aren't they still antiquated?

Not so, says Sun. "The automobile is more than 100 years old, but no one suggests that automobiles are an old or outdated technology," she points out. And just as the car of today differs from the car of 100 years ago so does today's mainframe differ from its predecessors, she said.

The newest mainframes delivered in 2010 had up to 50 percent more total system power than its predecessor, "uses 5.5GHz hexa-core chips – hardly old technology — is scalable to 120 cores with 3 terabytes of memory ... and is clearly larger (more capacity) and faster than anything available in the 60s, with a smaller physical footprint and better energy consumption characteristics".

And it's not just the fans that are rooting for the mainframe.

"All technologies have a future," said Giorgio Nebuloni, research manager for servers at IDC Europe. "Yes they are big and expensive, but they offer tremendous efficiency."

The strongest area for mainframes is, unsurprisingly, core banking he points out. That, along with telecommunications billing and the public sector, have been the key areas for mainframes for a long time and will continue to be so, he says.

Yes, says Nebuloni, by opening up the idea of the mainframe to clusters of x86 based servers. He points to Fujitsu as one of the companies leading in this area with a significant Unix business on mainframes. IBM and Fujitsu compete on that platform with large scale servers.

He sees cloud servers as another technology to compete with mainframes. "There are advantages to both but for cloud computing to succeed on a large scale it needs to offer similar facilities," he says. "This means it must be scalable, it should be available on a pay-as-you go basis as well as account and it must be scalable up and down."

"That's it," says Nebuloni. "If you have a lot of users and a particular purpose, you might want a mainframe. They scale."

"If you look at the mainframe it is a key infrastructure product that is completely scalable and you can make changes down to the CPU level," he points out.

The University of Bari in southern Italy is one of the organisations that has an IBM cloud service running on mainframes.

According to IBM, the cloud has enabled the  development of innovative applications for the local fishing industry which has been documented as well as the local wine-making business, local logistics companies and the university itself.

Although IBM’s work at the university is not wholly new – the company has been working in Bari since 2010 – the work still offers an innovative use of cloud services. The work is in three parts.

Instrumented: Captures humidity, temperature, soil and traffic conditions through a specialized appliance via RFID devices deployed in the appropriate location.

Intelligent: Provides real-time status of transportation logistics and market demand for particular fish and wine products. GPS geo-localization allows transportation companies to make adjustments for routes and deliveries, while fishing companies can begin product auctions while fish are being caught. Winemakers are also able to understand market demand for products, while also being able to ensure environmental quality by monitoring soil isotopes.

It is the pure variety of applications coupled with the variety of systems, computers systems and others, needed to run them that give some idea of the pure flexibility that cloud solutions can offer.

The business risk and cost of migration means the return on investment on decommissioning these systems is just not there.

Finding staff with the skills to run and maintain these big beasts is one of the biggest problems as the baby boomers, who started their careers when the mainframe was young, begin to retire. But now some companies are training a new generation of mainframe engineers to continue the work.

And while they remain that important, mainframes will be with us for some time.

Join Discussion for: With the world embracing cloud computing,...