Full Bio
Posted in Technically Incorrect on June 10, 2020 | Topic: Working from home: The future of business is remote 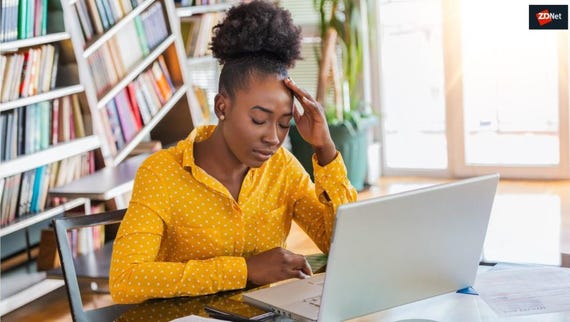 Some employers, however, eschew a swelling of the heart in favor of a bulge in their pocketbook.

What else can one conclude about one of the latest tech industry forays into making working from home more meaningful -- by turning human beings into, well, numbers?

I've been rendered, you see, temporarily unable to work by the proclamations of Tommy Weir. He's the CEO of a company called enaible. (I adore the use of the small first letter. An expression of productive modesty, surely.)

Weir explained his vision of the perfect employer/employee relationship to the MIT Technology Review: "Imagine you're managing somebody and you could stand and watch them all day long, and give them recommendations on how to do their job better."

It's a delightful thought for employees, isn't it? The constant feeling of warm, post-prandial breath on your neck. The faint odor of beer and onion rings, too. What every human being needs in order to be more productive is their boss whispering advice like an obsessive soccer coach.

Enaible has an enchanting slogan on its website: "There's got to be a better way."

To quote the company: "The enaible Productivity Score is the world's first comprehensive, normalized productivity score. Using your existing system data, we quantify productivity at the aggregate and team level through a multi-dimensional calculation of Capacity Utilization, Consistency and Quality Impact."

There's nothing more satisfying than being a normalized number. It would give co-workers something new to tell their lovers.

"What are you this week, darling?"

Enaible claims its secret lies in its Trigger-Task-Time algorithm. It supposedly measures exactly what sort of stimulus leads to what sort of task and what sort of time period to perform that task.

Modestly, enaible describes this as "the world's most accurate productivity score."

One imagines that if your productivity score dips below some machine-set level of acceptability, your boss will Zoom you -- if you're fortunate -- and fire you. And how bracing that the boss can explain that this is the world's most objective firing possible.

Even enaible admits that "knowing is only half the battle."

It chirps: "Our Leadership Recommender provides actionable, personalized, and prioritized leadership recommendations. Powered by our AI, our recommendations evolve to help leaders from all industries better their best and drive productivity growth."

I so want to better my best. Almost as much as I want to butter my bust.

I can't help thinking, however, that it's precisely the personalized part that's a little lacking here. Why would any sentient human want to work for a company that ultimately sees them as a number? No, I'm not specifically referring to Amazon here.

The tragic element with systems such as enaible's is that they threaten any idea of trust between employer and employee. Yes, things have been going that way for some time. (Thank you, Silicon Valley.) But the definitive nature of such tools allow them to be the ultimate arbiter.

If the machine can give such world-beating leadership recommendations, why not cut out the middle man or woman and just fire the manager?

Let's make it official. You work for a robot.

Join Discussion for: Working from home? Your boss has a creepy...