Full Bio
Posted in Between the Lines on April 12, 2021 | Topic: The future of work: Tools and strategies for the digital workplace 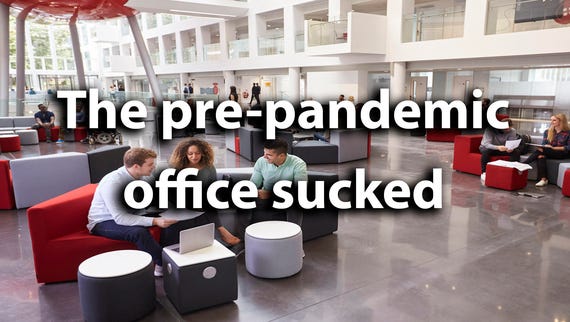 Don't romanticize the pre-pandemic office because it sucked
Watch Now

The new normal for work is entering a trial-and-error period that may be productivity's greatest A/B test as enterprises muddle through finding that hybrid utopia.

While these plans for returning to the office are fluid, the biggest risk to companies is clear. That risk? Romanticizing the pre-pandemic view of work. Simply put, the old normal just wasn't that great. In fact, the old work format kind of sucked.

Future of work: Tools and strategies to get it right | Research: Majority of enterprises rely on digital collaboration tools | Remote work tips | Remote work: 5 things every business needs to know

I'll leave out some of the middle school BS that would happen between co-workers. My life lesson for the day: Middle school never ends; it just ebbs and flows. Stop by any assisted living place and you'll get middle school flashbacks with 90-somethings.

My working theory is that going back to the office is going to rhyme with high school reunions. You'll want to see folks you haven't seen in a while and then get over it. We'll all run back to the office and then two weeks later realize that it wasn't all that and a bag of chips.

Data from Qualtrics and Robert Half revealed that employees don't want to go back to the old way of working. Workers have discovered through the COVID-19 pandemic that going into the office daily had significant drawbacks such as commuting, lack of privacy, and numerous barriers keeping you from finding your productivity flow.

Qualtrics ran a global survey with 4,000 respondents in the US, UK, Ireland, Australia, and New Zealand. The respondents were employed throughout the pandemic. Thirty-five percent of respondents worked entirely remote during the pandemic and 46% worked remote at least some of the time.

One thing is certain. There are going to be a few companies that get the new normal of work right and recruit more talent. Others are going to fail miserably.