Samsung has unveiled its Galaxy S4 LTE-Advanced, the first of seven new mobile devices expected to arrive in South Korea this year that are compatible with the next generation of high-speed mobile networks.

Like the original S4, the LTE-A model has a five-inch HD Super AMOLED display with 2GB RAM and 32GB onboard storage, but it runs on a 2.3GHz quad-core processor — an upgrade to its predecessor's 1.9GHz version. 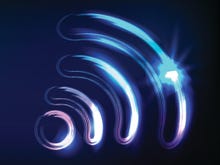 Samsung's LTE-A Galaxy S4 will initially be available in blue and red with more colours to follow, the company said on Wednesday.

Samsung's LTE-A release coincides with the launch of SK Telecom's new LTE-A network, which currently covers the entire Seoul area, 42 cities in Gyeonggi-do and Chungcheong-do and 103 university areas. The operator is planning to expand the network to 84 cities across the nation.

SK Telecom says that six more LTE-A devices are due to arrive on its network in the second half of 2013, all of which will be able to take advantage of the network's download speeds up to 150Mbps. The LTE-A connectivity means consumers can download an 800MB file in 43 seconds.

A key component of the LTE-Advanced standard is carrier aggregation, which allows carriers to achieve higher network speeds by combining multiple frequencies to boost bandwidth.

The company notes that other 13 other operators around the world — including Verizon, AT&T, NTT Docomo, Telenor, Telstra, Sprint, Three Italy, and Tota — have planned to launch LTE-A networks, but SK Telecom was alone in having an LTE-A compatible phone.

SK Telecom will spearhead LTE-A usage with a new campaign beginning at the end of June to promote consumption of mobile video, including a new video calling and conferencing service that supports up to four users as well as a full HD video streaming service that will launch in early July. For those obsessed with shopping, the mobile operator will also launch an HD video service in August that will let users watch six different shopping channels on one screen.