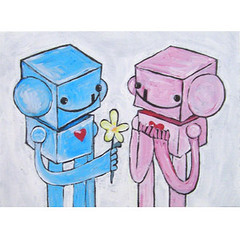 I get a lot of stupid pitches from PR folks for Tech Broiler. Most of them I ignore and go directly into the bit bucket.

But as tomorrow is Valentine's day, this one particular amusing distraction from the guys over at Wowwee, makers of those neat-o robotic toys (which are fun for girls and boys) gets a free pass:

If man and mannequin can find true love (see 1987 Kim Cattrall classic Mannequin), whoever said robots can’t love and cherish for richer or for poorer, in sickness and in health?

After all, Ally Sheedy did aid and abet one and Lindsay Wagner played one...what’s not to love?

It’s been a long, sometimes rocky, road bringing robots from the fringe to mainstream, so on February 14th take a moment to reflect on those forgotten heroes. Here’s our Top 10 Robots in Need of Some Lovin’:

And, oh yeah, their cool robot toys are on sale. I particularly like the Tri-bot thing, and his girlfriend Femisapien is half price (oh, what a deal!). My nephews got one for Hannukah last year from us, and they love it.

Now, being a bit of a Sci-Fi dork, and having an opinion on the matter, I have to take exception to Wowwee's list. Not that I have issues with the particular order, but some of these robots just don't belong there.

First of all Robby The Robot has to be one of the most loved and most famous robots in all of classic golden age 1950s and 1960's Sci-Fi. He's been in more movies and TV episodes than any other robot you can possibly imagine, pretty much guaranteeing he's had more interaction with back stage assistants giving him tons of lube jobs and polishing his various rotator joints than any other robot in show biz, short of C3PO and R2D2.  I'm also pretty sure I've seen him grasping some screaming blonde or red-headed bink in a tight fitting space suit a couple of times on film, so I think it's safe to say he's gotten some.

Short Circuit's Johnny 5 has way too much cute factor, considering he's the evolutionary precursor to Wall-E, and I'm pretty sure he got some lip-smackin' action or at least some on-screen heavy pets and optical assembly polishing from Ally Sheedy. In fact  it's a sure bet that Johnny probably got more "lovin" on and off-screen in that movie than his co-star, Steve Guttenberg.

Jaime Sommers? THE BIONIC WOMAN? C'mon? What male Gen-Xers of my age group during the mid-late 1970's didn't have a pin up poster of Lindsay Wagner AND Farrah Fawcett Majors in their bedroom growing up (this, along with at the top of her prime Lynda Carter) and didn't fantasize about having BOTH of them in bed at the same time? One The Bionic Man's on-screen girlfriend and the other his off-screen wife? And Wowwee, get your damn terminology right, The Bionic Woman is a CYBORG. Not an android. And the last time I checked she had her legs, one of her arms, and an ear replaced -- all the essential components for "love" still function, dorks.

Now, In place of these, I'd like to add a few robots that DEFINITELY need some love.

First -- is the IT-0 Interrogator Droid from Star Wars Episode IV: A New Hope. Unless you are seriously into S&M, there is absolutely NO LOVE WHATSOEVER in this little guy's relationship with his subjects. When you see this thing floating toward you with the huge hypodermic needle sticking out with God-Knows-What spring loaded torture devices embedded in his chassis, like some cybernetic Dr. Mengele, love is the absolutely furthest thing on your mind. If any robot is in need of love, it's him.

Next is the robot and computer pair of Twiki and Doctor Theopolis from the early 80's Buck Rogers in the 25th Century series. Never mind that Twiki is probably one of the most annoying comic relief robots in any TV series that I can imagine, but it has to be one of the most debasing characters that voice genius Mel Blanc has ever had to play. But of course, at least Twiki has movable appendages and is CAPABLE of the mechanical functions of love, or at least a good hug, whereas Dr. Theopolis is simply a disembodied CPU with some of the worst TV shtick ever written for him. I hope the hack comedy writers that had to write the schlocky lines for these two poor bastards were shoved out an airlock or sent into the Phantom Zone.

Of course, American Sci-Fi has no exclusive to Robots that are starved of love. If you really want to find ones that need not only love but COUNSELING -- no, let me rephrase that, probably should be institutionalized or should enter a twelve step program, you have to go to Great Britain. Hey, who can blame them, it's raining all the time, which pretty much guarantees they are in a constant state of rusting, and until the last decade or so, they only had a few broadcast TV channels anyway, and they could only be seen at weird time slots on PBS stations in the US, so they are under-appreciated. British SF has so many pissed off angry cyborgs and robots that's it's hard to narrow it down to just a few, but I've chosen my guy. 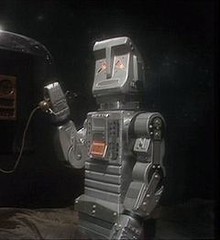 If there's any robot that is in a position to be top contender for most need of love on any Top 10 list, it has to be Marvin the Paranoid Android from the original BBC Hitchhiker's Guide to the Galaxy TV Series. Never mind the fact that he looks like a an over sized version of a preschooler's toy and schleps around slower than an arthritic octogenarian, but the poor chap is in a constant state of depression. "God, I'm So Depressed" is this guy's mantra. Marvin has a brain the size of a planet, and it probably would take a neutron star's mass of Xanax to lift this guy's spirits all the way from suicidal to post-traumatic stress disorder levels.

Got any favorite robots that are love-starved on Valentine's Day? Talk Back and Let Me Know.