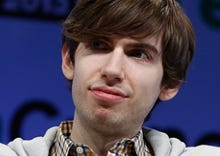 "We have a three-year strategic plan," Mayer told Rose when asked if she will be running Yahoo a year from now. "I can see how it will work and how we can actually get to a successful turnaround of Yahoo, but I think that, you know, it`s about our users and it`s about our employees and what`s happening with all of them, and I certainly hope that our services are here a year from now and that they run even better than they do today. I can see that that should easily be the outcome."

Mayer's comments come after Yahoo announced plans in February to explore options to sell its core assets and cut its workforce, following increasing pressure from investors. Several reports have noted Yahoo is currently shopping a list of forty potential buyers, including Time and Verizon.

Yahoo's strategic review committee is working with Goldman Sachs & Co. Inc., J.P. Morgan and PJT Partners as its financial advisers for a sale. Mayer said in the past that the plan is to work on strategic alternatives at the same time it carries out its turnaround plan.

When asked what Mayer has learned during her time at Yahoo, she harped on timing, according to a transcript from the Wall Street Journal.

Some investors have called for Mayer's removal from her position.

In 3.5 years the company went from an Internet pioneer to "the same kind of company that AOL was," Erick Jackson, managing director at SpringOwl Asset Management, told CNBC on Friday. "Other than one hour appearance with Charlie Rose, there's little else to point to," the investor said.

Mayer became CEO and President of Yahoo in 2012, after being Google's 20th employee starting in 1999.