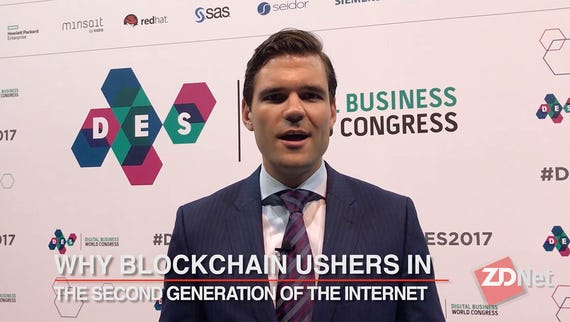 "Blockchain technology represents the second generation of the internet."

If that sounds like a hyperbole, it wasn't the biggest one that Alex Tapscott unleashed on the executives and managers at the Digital Business World Congress in Madrid in May.

He argued that Blockchain will disempower banks, make the energy grid far more efficient, fix the music industry, and save journalism.

And the craziest part was that his arguments came across a lot more like an entrepreneur explaining a pitch deck than a snake oil salesman peddling a crackpot theory.

Tapscott is the co-author of the book Blockchain Revolution and he gave the opening keynote on day two of DES 2017, where ZDNet and TechRepublic are media sponsors.

Internet technology is based on the concept of sending copies of files and retaining the original every time information is accessed. It functions like a digital printing press.

That's where Blockchain comes in.

If all of that sounds confusing, just know that Blockchain allows for the tracking of digital assets so that they can be verified as authentic and cannot be copied without permission.

That obviously makes it invaluable for currency, but it is also being used to exchange other kinds of digital goods as well as for contracts and other verified assets. For example, in the future it could be used for property deeds and election votes.

How can Blockchain disrupt society?

The key to Blockchain is trust.

Today, society and the global economy is based on trust of powerful intermediaries such as governments, banks, and now large internet companies like Google and Facebook. In the business world, some of the largest companies and fortunes are made by businesses that insert themselves in the middle of transactions as trusted intermediaries and then extract some of the value from the transaction.

These intermediaries do a fairly good job but they have their limitations, said Tapscott. "They take cost and slow things down," he said, and "anything that's centralized is vulnerable."

But above all, they "capture an asynchronous benefit" for what they provide. In other words, they take too much money while adding little value. Their main commodity is trust, and it's based on the perception that they aren't going anywhere.

Blockchain has a different kind of trust, based on the fact that it's decentralized and managed by the public so that no one entity can manipulate or control it. That's ultimately made it even more trustworthy, leading The Economist to label it "The trust machine" and The Wall Street Journal to refer to it as the "democratization of trust."

That trust can be used to establish a form of currency, verify a document, record a vote, or transfer a digital asset--with no middleman needed in between.

Since a lot companies make money by sitting in the middle of transactions between consumers and products, this is going to change the equation for a lot of industries. "Blockchain is going to have a profound impact on businesses everywhere in the world," said Tapscott

And it's not just the lumbering dinosaurs of industry that will be affected. "Blockchain disrupts the disrupters," Tapscott said. "It disrupts business models that are only 4 or 5 years old."

Take Uber, for example. It makes its money by being an intermediary between drivers with cars and people who need rides. Implicitly, Uber manages the identity and reputation of drivers and passengers, the social contract between them, and the payment. In the future, all of these things could be handled by Blockchain (or services running on top of Blockchain), with individuals only sharing the appropriate information necessary for the transaction. And the transaction savings could be passed on to both of the parties.

For more on how this could work in practice, let's look at the four examples we started with at the beginning of this article.

Because of Bitcoin, we already know that banks have a lot to lose from Blockchain removing them as intermediaries that make a hefty profit from controlling the flow of currency. Tapscott compared the way mobile payments are currently handled to a Rube Goldberg machine. They are unnecessarily complex and slow. In the future, Blockchain-powered transactions will simply require different levels of engagement from the customer. For a payment, all that's needed is data on whether the customer has the currency to pay. For a mortgage, the customer will have to provide additional data about income, assets, financial transaction history, etc. Banks are unlikely to go away, but they will have to migrate toward more value-producing activities than moving money around.

In a similar way, today's energy is managed by centralized entities, power companies that manage and control the grids that distribute power. However, the drastic improvements in solar (and other renewable energy sources) and in batteries is leading to innovations such as microgrids in communities. So if you generate solar power on your house or office, save it to your batteries, and have more than you need, then you can sell it to your neighbors at market value. This can save energy by keeping it local--because the further energy travels the more is wasted--and enables sellers and buyers to save money on the transactions, which could be managed by Blockchain. Currently, the power companies are the trusted arbiters in the middle that buy and sell power at the prices they set because they control the infrastructure. With Blockchain and microgrids that could soon change.

With the internet, musicians were promised that they would be able to break free of the record labels and sell their songs directly to their fans. Instead, their music got copied freely and is now streamed and it's driven its value down to zero. With Blockchain, each song file can have its royalty and licensing rights built in. It can automatically trigger tiny micropayments for use and the artist can get paid first instead of last (if it all). Artist Imogen Heap is among the first musicians to start experimenting with Blockchain as a new model for music.

Similar to the music industry, Tapscott said Blockchain-verified micropayments could also change the equation for journalism. Stories could have their rights embedded in each file and readers could be charged tenths of a penny for each piece of content they actually consume, for example. The result could be that readers think about which stuff is worth consuming and the best journalism could get funded "This could be the payment system we need to let journalism fight back against fake news," he said. As a media professional, I'd have to say that the challenge, of course, is that slideshows of celebrities get far more visits than investigative pieces about terrorists and social issues. But, this would be a worthy experiment.

Make no mistake, a lot work still needs to be done to make Blockchain a technology that will be used by average citizens. Using it today often involves jumping through a lot of very technical hoops. And it likely won't be Blockchain itself, but the services built on top of it that will become household names in the years to come.

Also, the Blockchain revolution doesn't mean there won't be businesses to be built and money to be made, but it's likely to reset the equation and require that companies provide a lot more value than simply conveying a transaction. By not concentrating so much power and wealth into a few trusted entities, it will likely allow for a lot more competition and let a lot more flowers bloom.

Nevertheless, as Tapscott said, "The opportunity to re-engineer the economic power grid is enormous."

We have to consider the fact that Blockchain could rewrite some of the rules of capitalism, which naturally favors concentrations of wealth. Tapscott thinks of it not so much as redistributing wealth as "pre-distributing" it by opening up more opportunities to more people, by default.

Join Discussion for: Yes, Blockchain could reverse the course...