YouTube to disable comments on videos featuring all minors

Upping efforts to protect young people on its platform.
Written by Asha Barbaschow on Feb. 28, 2019 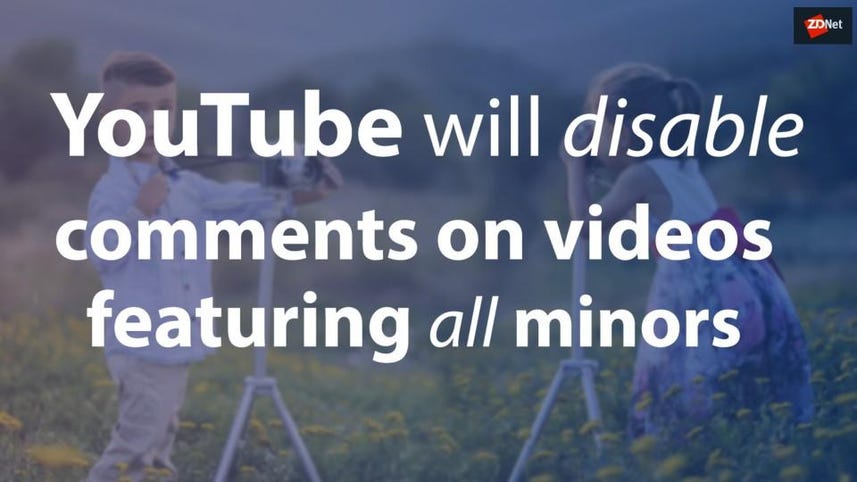 After beginning the process of disabling comments on videos featuring young minors on its platform last week, YouTube have decided to extend the block to those with older minors, in an effort to curb predatory behaviour on its site.

Over the past week, YouTube said it suspended comments from tens of millions of videos that had posed risks to such behaviour. The extension, which will see children up to the age of 18 covered, will come into place over the next few months.

"A small number of creators will be able to keep comments enabled on these types of videos," YouTube said in a blog post. "These channels will be required to actively moderate their comments, beyond just using our moderation tools, and demonstrate a low risk of predatory behaviour."

See also: How to make YouTube Kids safer for your children (CNET)

YouTube said it would work with creators directly, with the goal of growing the number over time as it improves its ability to catch inappropriate comments.

The Alphabet-owned company is also launching a new comments classifier that will identify and remove predatory comments, with YouTube promising the detection and consequential removal of twice as many comments.

Additionally, YouTube said it intends to take action on creators who cause "egregious harm" to the community.

"No form of content that endangers minors is acceptable on YouTube, which is why we have terminated certain channels that attempt to endanger children in any way," the blog continued.

"Videos encouraging harmful and dangerous challenges targeting any audience are also clearly against our policies. We will continue to take action when creators violate our policies in ways that blatantly harm the broader user and creator community."

YouTube has classified the following as harmful content: Sexualisation of minors, which includes sexually explicit content featuring minors and content that sexually exploits minors; harmful or dangerous acts involving minors, such as that showing a minor participating in dangerous activity, or encouraging minors to engage in dangerous activities; infliction of emotional distress on minors, including content that could cause participants or viewers distress; misleading family content, videos misleading viewers by appearing to be family content, but containing sexual themes, violence, obscene, or other mature themes not suitable for young audiences; and cyberbullying and harassment involving minors.

If content violates YouTube's policy, it will be removed and an email will be sent to the creator.

A warning for a first offence will be given, with no penalty. Once three strikes have been tallied, the channel will be terminated.

YouTube last week had already begun limiting the monetisation of videos that include minors, with those flagged as at risk receiving limited or no ads, and made known through the use of a yellow icon.

A coalition has accused YouTube of violating child protection laws.

The scams look credible but the only gift on offer is the loss of your personal data.

Videos uploaded as private or unlisted are subject to being crawled, but Google's documentation does not acknowledge this behavior at all.

iPhone
Why is Apple's 'Move to iOS' Android app so awful?

Torrent the easy (and anonymous) way with this secure $40 tool