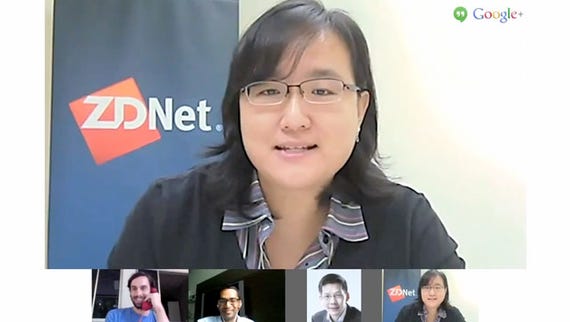 Does Singapore have what it takes to be Asia's Silicon Valley? And can it offer a conducive environment for local startups to thrive and drive innovation?

ZDNet asked these questions in an online dialogue featuring participants from the local startup and venture capital community:

Asked to describe the local startup scene, the participants said it was one that was still young and emerging. Lauria noted that it took generations to create an ecosystem like Silicon Valley in the U.S. and it would take time for Singapore's to reach a similar level of maturity.

I look at Silicon Valley as like Hollywood. If you want to make a huge blockbuster film that's global, you want to be in Hollywood.

They also pointed to the oft-cited fear of failure among Asians  and the preference to choose careers that were less risky.

Kotelawele said there were young Singaporeans who had chosen not to join startups, even though they had great potential to succeed, because they felt the need to work in big multinational corporations such as Microsoft. "This is hampering the growth of the ecosystem," he said. "There's a starvation of talent because smart people aren't working for startups as they don't want to have a failed startup on their CV. That's a disaster. You can't grow a startup ecosystem without good people."

Lauria agreed, adding this impacted a startup's ability to hire talent. He described how some companies under Golden Gate's portfolio were having a difficult time trying to to attract top talent away from high-paying corporations who were unwilling to take up risks with a startup that may or may not succeed.

He said, though, this would change over time as local successful entrepreneurs such as Yuan, which company was recently acquired by U.S. networking equipment vendor Ruckus Wireless , and other success stores begin to emerge. "I can see how the first few employees [of successful startups] now own a Ferrari and drive that around the parking lot. That's going to help [convince generations to follow suit] but it's going to take time," he added.

Lauria also pointed to Singapore's uniqueness as a melting pot of nationalities and cultures which could not be easily replicated, noting that 52 percent of all founders in Silicon Valley itself hailed from outside the United States.

We're not after workers to fix roads, and we're not after rocket scientists either. We need a particular profile of people who are going to be successful in startups.

Regardless of their origins, Yuan noted the need to nurture Singapore as a place where ideas are born, shared, and executed. "You can do that by bringing great minds together, and you do this by making easy for people to come over here... It's certainly all about talent and bringing the brightest in a room and start [working on ideas]."

So why has Singapore still not produced a Facebook or Alibaba, or successful startups the likes of those from Silicon Valley? Rather than measure itself against other ecosystems, the participants called for Singapore to create its own definition of a startup environment.

Lauria said: "I look at Silicon Valley as like Hollywood. If you want to make a huge blockbuster film that's global, you want to be in Hollywood. You want Hollywood actors, Hollywood directors, and Hollywood producers. To recreate Hollywood, it's very very difficult. Singapore is on track to have its own flavor, and be its own kind of hub for tech startups. It's something that's going to take time, but it's headed in the right direction."

And the country is moving in the right direction because the government has made it easy to start businesses here, Yuan said. The Asian economy also offers a great platform to connect to people from a broad spectrum such as universities, different pockets of the industry, and the media. "It's so easy to connect and collaborate with them and the Singapore government also has been supportive ," he said.

He echoed Lauria's view for Singapore to find its own path, rather than become another Silicon Valley. "But can we be a culture that forces more innovation and encourages people to take more risk and do something worthwhile? I think we can do that," Yuan said.

But can we be a culture that forces more innovation and encourages people to take more risk and do something worthwhile? I think we can do that.

To better foster an environment that can help startups flourish, Kotelawele suggested there should be a special class of visas to make it easier for startups to hire foreign talent.

Lauria agreed, noting that with no income and less than a year old, startups typically find it tough to fulfill local requirements to hire employees from overseas.

Kotelawele explained: "We're not after workers to fix roads, and we're not after rocket scientists either. We need a particular profile of people who are going to be successful in startups. So maybe there needs to be a different class of visa for people willing to come to Singapore and work in a startup environment. This should be global and go into the highly skilled labor category."

He also called for Singapore enterprises, as well as the government, to buy from local startups. This level of support for local products is commonplace in countries such as Israel, where many tech startups are successful because Israeli companies are willing to buy from unknown local brands, he said.

Yuan concurred, adding that the public sector was in a good position to start the ball rolling.

"A lot of large companies here don't have the appetite or autonomy to buy from local startups because they need to get approval from their [global] headquarters. It's the government that doesn't need to report to some headquarters somewhere in the world and can make a good assessment of whether a company is worth buying from or not," he noted.

Join Discussion for: ZDNet dialogue: Can Singapore be Asia's Silicon...