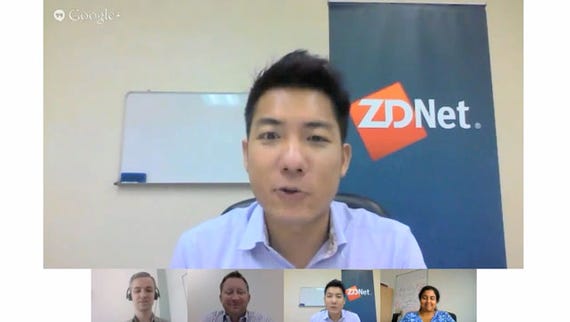 What needs to be done to help Singapore small and midsized businesses (SMBs) tap big data? What's holding them back from doing more?

ZDNet asked these questions in an online dialogue featuring participants from the industry:

According to a recent study, 1 in 5 Singapore SMBs have no current plans to adopt big data technologies. Among the top obstacles they cited were budget and corporate culture.

Agreeing, Krishnaswamy noted the high setup costs behind the infrastructure and talent were a barrier.

"What's really happening is that tools are available on cloud platforms but then analytics tools are not very easy to use unless you're an experienced data scientist."

"What's really happening is that tools are available on cloud platforms but then analytics tools are not very easy to use unless you're an experienced data scientist," she noted. One way to help SMBs avoid the upfront costs is a managed services model where they can lease expertise to use those tools and access common industry insights, added Krishnaswamy.

Lyons noted a model where data scientists on tap was available could encourage more SMBs on board.

However, Barnes noted that while shared tools and expertise were helpful, they were likely to be more beneficial for startups and entrepreneurs as they had no legacy constraints. The Forrester analyst explained that the challenge for SMBs is that for years they've been doing things in a certain way.

"Analytics for most organizations, certainly SMBs, that means some type basic static reporting. To make that leap to leveraging data or some type of significant differentiable advantage, that's a huge leap," said Barnes.

"Most companies are sitting on huge piles of 'dark data'--large datasets that are potentially both useful and valuable, but no one is looking at them."

The starting point for SMBs should be thinking somewhat "small", the Forrester analyst added. "By small I mean narrow in scope, tied to a fundamental business opportunity opporunity or challenge."

According to Lyons, with the plethora of data available spanning from social media and public datasets , SMBs should really focus on internal data. "Most companies are sitting on huge piles of 'dark data'--large datasets that are potentially both useful and valuable, but no one is looking at them."

SMBs should try to put a "toe in the water", because the number of options can be daunting and lead to "analysis paralysis", he said. "It's just about getting out of the building, and taking the first step."

Krishnaswamy advised that Singapore companies should to look at the many existing government schemes and subsidies available that can help them as one of the first steps. They should also work toward getting insights from others and learning from their experience, she added.

SMBs have no choice but to act

Barnes noted most SMBs cared more their day-to-day business operations, including how to operate more efficiently and more effectively. "It's not because they don't value data, it's the classic problem that we in IT, including analysts, tend to assume a trend or topic like big data has some inherent value that everyone can recognize."

"You cannot ignore the increase of information that's available because other organizations won't ignore it and you'll be left behind."

"We start with this notion of big data as some notion of inherent goodness when that's not the way business people think," he added, noting a more meaningful approach for SMBs would be to relate to how big data fits in their context.

The Forrester analyst explained it was important to "start from the outside" and see how to inspire people with ideas about what they should be doing different in their own organizations.

Business owners should either plan to disrupt their processes and practices, or expect to be disrupted, Barnes noted. "You cannot maintain the status quo. You cannot ignore the increase of information that's available because other organizations won't ignore it and you'll be left behind."

"There's an urgency about it, you have no choice but to act on it," said Barnes.