As Slackware Linux is approaching a new release (they posted RCpi over the weekend), I have been trying out the Release Candidates. The basic philosophy of Slackware is still the same as it has always been - it is a "hard core" Linux distribution, and those who install it are expected to have at least a reasonable working knowledge of Linux configuration and management - not unlike Debian, but somewhere more extreme in this regard. As with Debian, there are some derivates of Slackware which add more polish to the installer, focus on a specific desktop, add a variety of popular packages, and present themselves as a more "user-friendly" distribution.

The first of those to make a new release is Zenwalk Linux, which announced their 7.0 distribution last Friday. The ISO image is just under 600MB, and is available only for 32-bit Intel (and compatible) architecture. Besides the obvious route of burning the ISO image to a CD, I found a very helpful Zenwalk Wiki article describing how to install from a USB stick. It's quite simple really, thanks to a very nice addition they have made to their installer. After downloading the ISO, you copy it to a USB stick with unetbootin; then you boot the USB stick, but immediately exit the installer, create a directory and mount the USB stick to it, then restart the installer and point it at that directory. The installer itself is a typical Slackware text-mode (non-GUI), but it is clear and simple, and asks a minimum of questions before going about its business and doing the installation. The entire download/copy/install procedure took well under an hour.

Zenwalk uses the LILO bootloader, rather than Grub, so I had to be careful about that. I don't really feel like fighting more bootloader configuration battles right now (see my previous post about Legacy Grub and Grub2), so I simply told it to skip the bootloader installation and then I manually added three lines to my Grub configuration file to boot Zenwalk. However you go about it, once you boot the installed system you get the Zenwalk Xfce desktop: 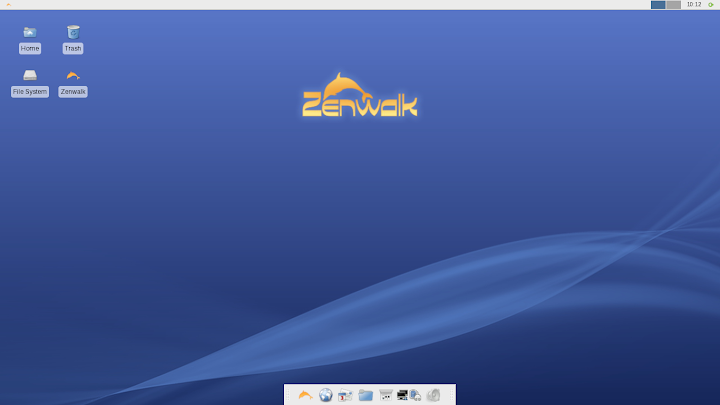 As with previous Zenwalk releases it uses the Xfce desktop, in this release it is the latest (4.8) version. I like Xfce, in particular because it is clean, simple, fast, and quite configurable, so I find it well suited for netbook systems. To configure the desktop, right-click on the background and choose Desktop Settings. There you will be able to select wallpaper, customize menus, and select which icons are shown on the desktop.

The Zenwalk Xfce desktop has a Top Panel with a task manager, desktop selection, clock and Logout/Shutdown button, and a Bottom Panel that is essentially a Menu, Quicklaunch and Configuration/Control Icon area. The obvious way to get to the Zenwalk menu is by clicking the dolphin icon at the left end of the bottom panel, but in fact you don't have to go all the way down there, you can get it by right-clicking anywhere on the desktop background. 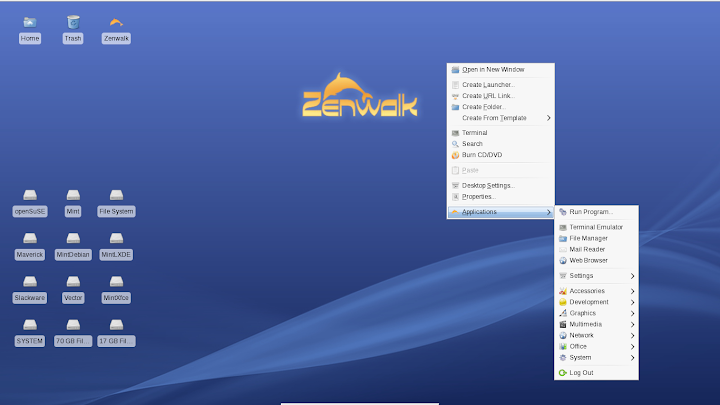 Here I have placed the mouse cursor to show the Applications menu, which is organized to group applications and utilities in pretty much the same way as other desktops. You might also notice that I have also "hidden" the top and bottom panels. I find this particularly beneficial on netbook systems with limited screen space. To do this from the menus shown above, choose Settings and then Panel, or simply right-click on either panel and then choose Panel and then Panel Preferences. 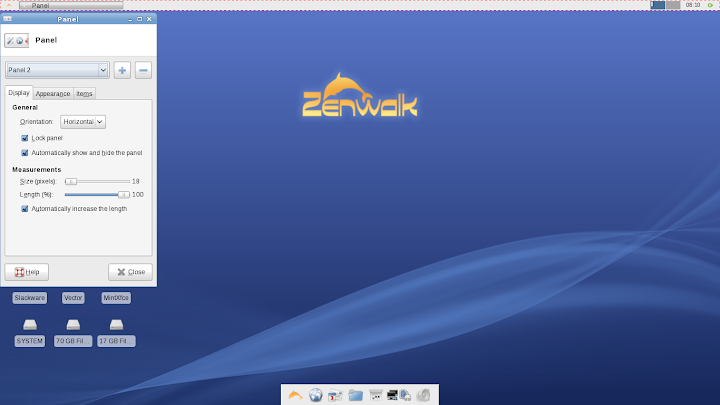 In this control, the bottom panel is "Panel 1" and the top is "Panel 2", so you can adjust either of them by selecting the panel. In fact, what I usually do on netbooks, especially those with 1024x600 screens, is move the bottom panel to the right side of the screen. To do this select Panel 1, then clear the "Lock panel" button, change the "Orientation" to Vertical, and then drag the panel to whichever side of the screen you want.

For system management Zenwalk uses the typical Xfce utilites, such as the Thunar file manager, and Wicd for network management. There is also a Control Panel utility, which groups a number of commonly used controls for easy access. 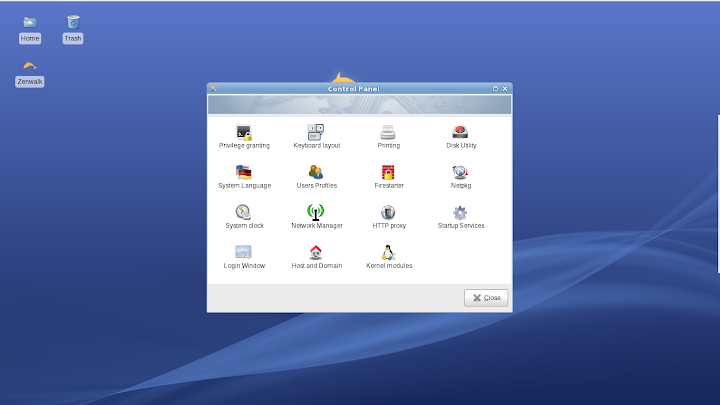 Here you can also see that I have moved the bottom panel to the right side, and I have turned on auto-hide for both panels.

Zenwalk includes a good selection of utilities and applications. It uses the GNU IceCat browser, which the Help box explains "was made by making small changes in Mozilla Firefox". The changes are primarily in the areas of branding and licensing. It also includes IceDove, which is similarly derived from Mozilla Thunderbird. It has LibreOffice 3.3, including Writer, Calc, Draw and Impress, and it also has Orage Calendar and Globaltime. If you haven't tried those last two, they are worth a look, I find them quite handy. Oh, and the default text editor, if you double-click on a text file, is ... (are you listening, Jake?) Geany! Of course, it still has vi (well, vim to be accurate) for old die-hards like me. For graphics it has GIMP, for picture viewing/management it has gThumb, and Document Viewer for PDF files. In the Multimedia category it has Brasero for CD/DVD burning, Gmusicbrowser for audio and Totem for video, and on, and on... my fingers are getting tired...

So, how did Zenwalk actually work for me, on my menagerie of notebooks and netbooks? Well, the results are mixed. On most of them it worked flawlessly right out of the box, but not all of them were this way. The biggest problem was that it does not yet include the brcm80211 driver, so the newest generation of netbooks with the Broadcom 4313 WiFi adapter didn't fare too well. I asked about this in the Zenwalk forums, and was told that the driver won't make it into the distribution until it is out of "staging" status... I hope they either change their minds about that, since it is working quite well for me already in the latest openSuSE and Debian distributions, or that the driver gets out of staging and into the main distribution soon. Beyond that, there was good news / bad news on the Lenovo S10-3s netbook. Good news, Zenwalk includes the latest Synaptic driver (1.4.0), so the "ClickPad" works just fine, which was a pleasant surprise. Bad news, for some reason even the wired ethernet doesn't work, there seems to be something wrong with the tg3 driver. Last, but certainly not least, Zenwalk installs and runs very well on my trusty HP 2133 Mini-Note. Zenwalk includes the openchrome display driver, and the Broadcom b43 driver, so they were recognized and came right up with no problem. In fact, all things considered this might become my distribution of choice on the 2133 because of the ease of installation and the Xfce desktop. I'm not quite sure yet, because there seemed to be something wrong with the sound on the 2133, but I haven't followed up on that yet.

I'll close with a Switzerland-specific problem. There seems to be something wrong with the Swiss keyboard maps during the base installation. There is no Swiss German (de_CH) map, I have to choose Swiss French (fr_CH), but this is not new, Slackware has been this way for a long time. That seems to work, and the keyboard is fine through the text-mode installation. But when the installation finishes and I reboot, the keyboard is dead with X running. Dead, dead, dead, and I couldn't figure out how to get it working. If you know enough about the X configuration files you can change the keyboard definition, but the simple solution is to just leave the default (U.S.) keyboard definition during the installation, and then change it to Switzerland after you reboot. Note that I only had this problem with the Swiss keyboard, selecting German or leaving the default U.S. worked just fine.

In summary, I am pretty impressed with Zenwalk Linux 7.0. It looks good and it works well, as long as you don't have a netbook which needs the latest Broadcom wireless driver. I will probably keep it as the primary distribution on my HP 2133, and once the brcm80211 driver is included in it, I will be considering it for some of the others.