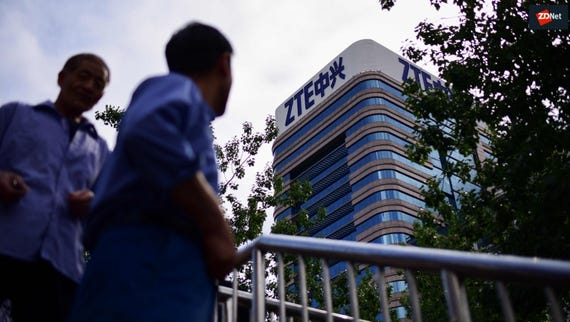 Chinese technology company ZTE Corp will be "shut down" in the United States if it engages in one more bad activity, White House trade adviser Peter Navarro has warned.

"The President did this as a personal favour to the President of China as a way of showing some goodwill for bigger efforts such as the one here in Singapore," Navarro told Fox on Sunday, referring to Tuesday's summit between Donald Trump and Kim Jong Un.

He added that ZTE was a "bad actor" but that the deal included safeguards, such as requiring the company to retain a compliance team selected by the Commerce Department for 10 years. The company already has a US court-appointed monitor.

ZTE last week agreed to pay a $1 billion fine to the US and to overhaul its leadership in order to end a crippling ban on the Shenzhen-headquartered firm from buying parts from US suppliers and allowing it to get back into business.

Commerce Secretary Wilbur Ross said the fine was on top of the approximately $1 billion ZTE has already paid for selling equipment to North Korea and Iran, in violation of US sanctions. Ross added the compliance team and senior leadership changes need to be in place within 30 days.

The ban, which traces back to a breach of the US embargo on trade with Iran, had prevented China's second-largest telecoms equipment maker by revenue from buying the US components it relies on to make phones and other devices.

The initial period of the ban was for seven years, after the commerce department concluded that ZTE deceived US regulators.

"ZTE misled the Department of Commerce. Instead of reprimanding ZTE staff and senior management, ZTE rewarded them. This egregious behavior cannot be ignored," Ross said at the time.

In the days following the announcement, ZTE said it was ceasing major operating activities of the company, and sellers of white-labelled devices such as Australia's Telstra scurried to find replacements.

Less than a month after the ban on ZTE, Trump directed the US Department of Commerce to allow ZTE to operate again.

"President Xi of China, and I, are working together to give massive Chinese phone company, ZTE, a way to get back into business, fast," Trump tweeted.

"Too many jobs in China lost. Commerce Department has been instructed to get it done!"

Speaking on Sunday, Navarro said if ZTE falters one more time, they would be shut down.

"It's going to be three strikes you're out on ZTE," Navarro said, adding that everyone within the administration understood this was the policy.

Prominent US Democratic and Republican lawmakers last week introduced legislation to try to overturn the deal, saying ZTE posed a threat to US national security.

In February, the heads of the CIA, FBI, NSA, and the director of national intelligence to the Senate Intelligence Committee warned against the use of products from Huawei and ZTE.

This was followed in April by the UK National Cyber Security Centre reportedly sending a letter to British telcos warning of the risks of using ZTE equipment, which would create national security risks that could not be mitigated against.

On Sunday, Navarro said Trump's decision to allow ZTE to continue operating in the US was a gesture to help build goodwill with China.

Must read: Dissecting ZTE: What it is and what it wants to be

The Commerce Department has said the ban will remain in place until the company pays the fine and places $400 million more in escrow in a US-approved bank.

In March 2017, ZTE had been fined $1.2 billion by the United States for directly, or through third-party distributors, shipping $32 million-worth of products containing US-made equipment to Iran between 2010 and 2016 without the proper licensing.

In March, ZTE reported 2017 full-year net profit of 4.6 billion yuan, following the net loss of 2.4 billion yuan for 2016 -- a year in which the company said it would have made 3.8 billion yuan in net profit without a payment of $892 million to the United States after pleading guilty to breaking US trade sanctions.

Washington has reached a deal with ZTE Corp that will lift a ban on buying from US suppliers, US Commerce Secretary Wilbur Ross says.

The first major casualty of the China-US trade war is getting 'back into business, fast' according to the president of the United States.

Join Discussion for: ZTE deal was a personal favour to Chinese...