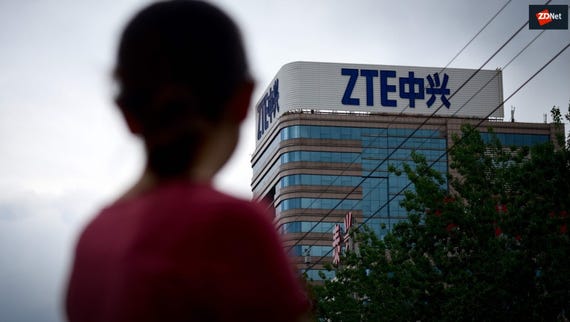 The bad boy of global telecommunications networking is many things, but ZTE is first and foremost a supplier of carrier equipment to telcos -- that means base stations and core networking, not handsets.

With the fate of the company appearing to rest in the hands and whims of the Trump administration, let's take a closer look into what ZTE does.

Carrier networks are really its thing

If you poke around the 440-odd pages in the latest annual report [PDF] from ZTE, it lays out exactly where the company gets its money.

The company breaks itself down to three divisions -- carriers' networks, government and corporate business, and consumer -- each of which do what they say on the tin.

Out of the 109 billion yuan in revenue, or around $17 billion, for its 2017 fiscal year, carriers' networks made 64 billion yuan, consumer accounted for 35 billion yuan, and government and corporate brought in 10 billion yuan.

Profitability in each segment tells the real story of the company: Consumer has the lowest margin, at 15 percent; government and corporate sits on a 29 percent margin; and carriers' networks is on a fat 40 percent.

To give an idea of the size of the deals possible when selling to telcos, consider the following from the report: "Operating revenue of RMB23,151,019,000 was derived from carriers' network and handset terminal revenue from one major customer". That's $3.6 billion from a single customer.

ZTE is big in China

Despite having a large presence beyond China, ZTE still makes the majority of its sales inside the country.

The company makes 57 percent of its revenue in its home nation, a further 14.5 percent from the rest of Asia, 3 percent in Africa, and a final 25 percent from the grab-bag category of Europe, the Americas, and Oceania.

ZTE is all about R&D

From a company of almost 75,000 at the end of 2017, ZTE says it has nearly 40 percent of its workforce dedicated to research, and dedicates 12 percent of its operating revenue to R&D.

The company boasted that it "ranked first in international patent application for the third time and ensured a top 3 global ranking for 7 years in a row" in its report.

In 2014, ZTE US chairman and CEO Lixin Cheng focused on the amount of intellectual property created by the company.

"If you utilise others' technology, you better pay the licence so that you have a better position to defend yourself when other guys come after you," Cheng told ZDNet at the time.

"In terms of patents, you cannot afford this kind of mistake -- and I see so many mistakes from others."

Make no mistake, ZTE has breached US export restrictions during its existence.

The company was fined $1.2 billion in March 2017 by the United States for directly, or through third-party distributors, shipping $32 million worth of products containing American-made equipment to Iran between 2010 and 2016 without the proper licensing.

Then last month, the US Department of Commerce said ZTE lied to the Bureau of Industry and Security about disciplinary actions supposedly enforced on senior employees relating to the illegal shipments to Iran and North Korea, and paid full bonuses to employees who had engaged in illegal conduct.

If you were a president looking for a company to target at the start of trade war, a better candidate would be hard to find.

Add into the mix the warnings from US intelligence chiefs, and the United Kingdom National Cyber Security Centre over the use of ZTE equipment, and an export ban on the company might be of benefit to the US and its allies.

And while it appeared ZTE would be the first casualty of new hardball approach by the United States to trade violation, all that changed in a Trump tweet. It now looks as though the company will receive some form of resuscitation.

The deal vs desires to be a 5G player

Skirting around attempts to divine the sort of deal the US Commerce Department will strike, it appears ZTE will find itself locked out of future carrier deals in the US and the UK, with fellow Five Eyes nations Australia, New Zealand, and Canada likely to follow suit.

This is particularly bad news for a company that makes its money out of building telco backbones, especially when a network refresh thanks to 5G is appearing over the horizon to gobble up a large amounts of the capital expenditure, and one that could use 5G handsets to push its consumer ambitions.

ZTE has been involved in numerous 5G trials already, and looked set to be a frontrunner alongside its compatriot Huawei.

"The group's profile as a forerunner in 5G has been further enhanced with ongoing innovations and implementations in 5G frequency technology, 5G core network technology, 5G bearer technology, 5G high/low frequency matching base stations and 5G chips, world-leading position in technology verification and product-based development, a more vocal involvement in standard formulation, the completion of the second-stage national 5G tests and tests of more than 20 global mainstream carriers, and strategic cooperation agreements with global mainstream carriers in a joint effort to advance 5G technologies and market applications," ZTE said in its annual report.

Whether ZTE can make good on its work to date depends entirely on Washington and if it is allowed to get its hands on US componentry. Put thoughts of access to Android and Snapdragons to one side; this game is about rich telco contracts.

Its misdemeanours should rule it out, but in 2018, anything is possible.

Join Discussion for: Dissecting ZTE: What it is and what it wants...