The bank will be spending big on technology in a bid to keep improving its systems and services.
Written by Asha Barbaschow on Oct. 15, 2019 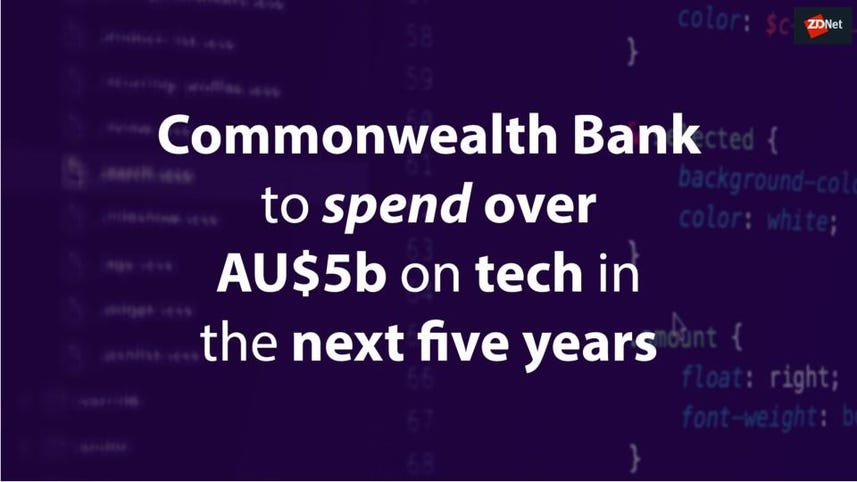 Commonwealth Bank of Australia (CBA) CEO Matt Comyn has announced his bank intends to spend big on technology in the coming years to make the yellow bank more customer-friendly.

"Over the next five years, we plan to invest more than AU$5 billion in technology to keep improving our systems and services, to help keep our customers safe and secure, and to serve them better," Comyn said, speaking at the bank's 2019 annual general meeting.

Pointing to the bank's recently launched CommBank mobile app 4.0, Comyn said that with customers increasingly choosing to interact with CBA online, being the "best in digital" will continue to be a key part of the bank's strategy.

"With 7 million active digital customers and 7.4 million logons per day, we're doing all we can to make banking more personalised and more convenient," he said.

The app, launched in July, is touted by the bank as offering greater personalisation, tailored specifically to the individual needs of each customer, with personal cash flow management and smart alerts all aimed at keeping more money in customers' wallets.

Speaking with media at the launch of CommBank App 4.0, CBA chief digital officer Pete Steel said the app update comes after the bank decided it would bring all of its technology and digital capability in data and artificial intelligence (AI) to "really solve problems for customers".

"The new app, it's a fresh new look and feel -- it's quite unbank-like," Steel said. "Combining functionality and the power of AI and data to bring things to customers' attention quicker, better than ever before. It's a revolutionary technology stack for us as well."

Adding to this on Wednesday, Comyn said the app is smarter and more tailored to customers' individual needs.

"We are now notifying customers through our mobile app when bills are due, when suspicious activity has occurred on their account, or how their spending compares with prior months," he continued.

According to the CEO, his bank has also strengthened its security protections by implementing 24/7 real-time monitoring and new in-branch and eLearning staying safe online seminars.

"All of this great technology, combined with great service, will continue to improve our customers' financial wellbeing," Comyn said.

How CommBank is training its machine learning Customer Engagement Engine

The batch of customers that are responding to a simple notification are actually helping the bank train its 200-plus machine learning models.

The yellow bank goes live with its new app that is 'personalised like Netflix'.

CBA praises the Cupertino system it long fought against that has seen mobile payments increase by 400%.

The 5 best juicers: Make your own juice at home

The 5 best juicers: Make your own juice at home