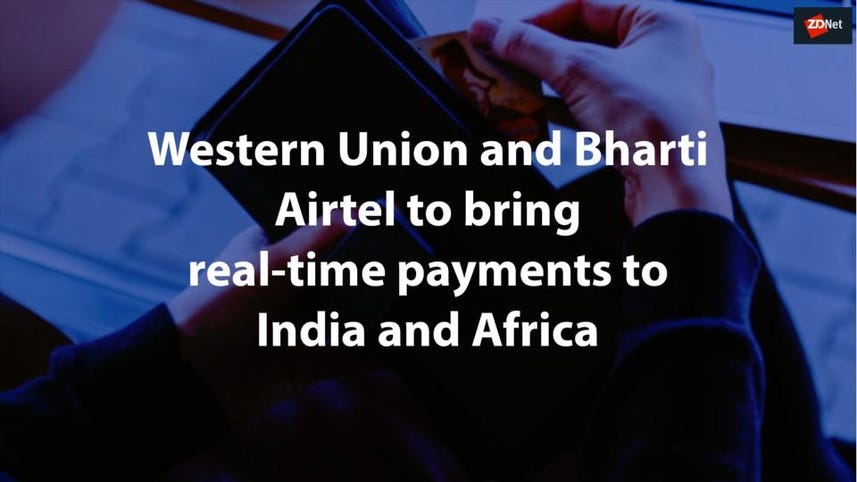 Western Union and Indian telco Bharti Airtel have partnered to launch two new payments services that will allow customers in India and Africa to move and receive money in real time.

As part of the services that are due to launch during the year, Airtel Payments Bank customers will be able to direct any Western Union money transfer into their bank accounts in real time via their banking app.

At the same time, the companies said senders from around the world will be able to push funds directly to an Airtel Money mobile wallet in real time.

"The future of money transfer is about customer choice -- allowing them to move money whenever, however and wherever they want," Western Union president and CEO Hikmet Ersek said.

"Our platform cuts through the complexities of cross-border money movement and payments so millions of customers can access their funds in real-time and in a manner that suits their local infrastructure and preferences."

At the time, the company inked a deal with African mobile operator MTN to launch a cross-border mobile money transfer service.

The Indian telco was forced to set aside $13 billion for fees following a Supreme Court ruling, which resulted in Singtel being left with a SG$668 million net loss for the second quarter to September 30.

In similar news, UnionPay International (UPI) and PayPal have announced a partnership that will allow UnionPay cards to be added to PayPal wallets in Australia, Philippines, Singapore, South Korea, and Thailand.

The two companies said they plan to expand this to more than 30 markets during 2020.

As part of the agreement, the pair have also agreed to explore opportunities to support PayPal merchants and consumers in China, including enabling PayPal customers globally to use PayPal where merchants accept UnionPay.

"The partnership will give UnionPay customers more choice when shopping cross border and has the ability to contribute to the overall growth of China's e-commerce ecosystem. It will also give PayPal the opportunity to explore the option to expand PayPal's digital wallet to physical retail locations where UnionPay is accepted in China, or internationally," he said.

The company's VP head of technology transformation detailed the global regulatory requirements that impact a cloud strategy at an organisation like Western Union.

Mobile payments skyrocket in India while banks watch from the sidelines

Digital payments firms like PayTM, Google Tez, and the recent entrant WhatsApp are rapidly pushing credit and debit cards into the background.