You'll love the suction power and mobility that the iLife A11 offers, but may be disappointed with the mopping functionality.
Written by Elizabeth Mauder, Video Producer on April 29, 2022 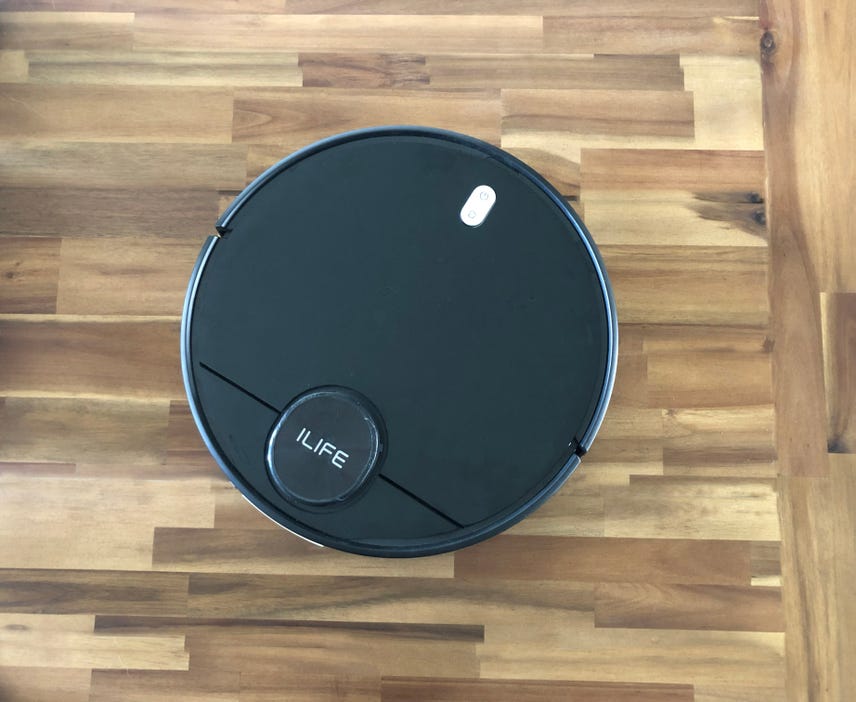 This two-in-one robot vacuum and mop is our next candidate in our review series of tech that makes our everyday lives easier.

For the last few weeks, I've been putting the iLife A11 to the test in my home against a super-shedding German Shepherd, a German Shorthaired Pointer, and our cat. So if you're curious how this robot stacks up against some serious dirt and debris, my home has it and I've tried it.

The iLife A11 is a decent robot vacuum, but it has its shortcomings. It has different vacuuming modes, which I enjoyed using, a mop built right in, and uses Lidar technology. Coming in at $400, this is a powerful robot vacuum cleaner at a mid-level cost.

The iLife A11 is a two-in-one vacuum and mop, with the capability to do both tasks simultaneously, but my floors are dirty enough that I always vacuumed first, and then mopped just to be safe. Because I broke up the two tasks, I'll separately review both functions, but for now, the overall performance can be lumped together. The iLife did a nice job getting to know my home. It was obvious that the more it ran, the faster and more acclimated it became. The Lidar technology made sure that all of my floors were being cleaned, and they were cleaned in a methodical manner.

The vacuum has three different suction settings you can choose from: max, auto, and quiet. Max was certainly the loudest and strongest setting available, but it wasn't one I found myself using very often. Auto was about what you expect from a robot vacuum in terms of noise -- you know it's there but it isn't so loud that it's interrupting your conversations. And quiet, was in fact, quiet. I almost always opted for the auto cleaning suction power simply because of the dirt and debris that accumulates daily in my house. For homes without kids or pets, you could likely run on quiet mode and be satisfied with the cleanliness of your home.

For the first two weeks that I used the iLife A11, I was very happy with the vacuum portion of the robot. But then, and for no reason that I could ever find, it began fixating on one area in my house to clean over and over again. My poor living room rug was cleaned countless times with this robot. I would set the robot to vacuum my entire house, and it would get one section done and then head straight for my rug. I almost always supervise my robot vacuums to ensure that nothing bad happens, so I would let it go for about 10 minutes, hoping it would decide my rug was clean enough, but I frequently had to pick up the vacuum and move it to a new location. This never solved the issue. I'd put it back down, in another room across the house, and bam, it was on its way right back to my rug. This didn't happen every single time I ran the vacuum, and it didn't start happening until a couple of weeks in. But for whatever reason, some days my rug was the only thing the iLife wanted to clean.

To see if this was an isolated event, I took the iLife A11 to my parent's house and let them set it up and run it from the very beginning, as if they'd just pulled the machine out of the box. They did not experience the same issue. The vacuum did exactly as it was supposed to without incident. The robot worked there for over a week, picking up all of their debris and running smoothly, just as intended.

When I realized that the iLife A11 was a two-in-one machine that could simultaneously vacuum and mop, I was ecstatic. Vacuuming and mopping are tedious tasks, and ones that I feel could be done daily if I had the time, so the idea of one machine that could do both of these for me was thrilling. But the results from the mop were disappointing. The Lidar technology does a nice job of making sure that everything is covered, but the execution is poor. The mop left streaks (see the picture below) throughout my entire house. I thought maybe it was because the mop pad wasn't damp enough yet, but even after covering over 1000 square feet, the mop was still leaving streaks. So where the mop pad actually touched my floor was clean, but the middle portion was always left dirty.

Another problem with the mopping feature is that it does not detect carpet or rugs when it is running. It was frustrating to have to either pick up the smaller rugs or block off the larger rugs that aren't easily moved every single time I ran the mop.

One thing I really liked about the mop function is that it vacuumed and mopped at the same time, making the machine even more efficient. It compartmentalized the dirt and debris well enough that the mop head wasn't filled with additional dirt. Once the uneven streaking issue is addressed, this will be a great two-in-one machine for this reason alone.

I wanted to see how the iLife A11 would stack up against some everyday household debris that robots may encounter. I took an otherwise clean section of flooring and threw down some kitty litter, dog food, grass clippings, and crushed potato chips. The A11 picked everything up in its path. It did a great job cleaning up the everyday wear and tear on my floors. Dust, dog and cat hair, dirt -- it all got cleaned up. The 4000Pa suction power is very effective and I think you'll be satisfied, or even disgusted, at how much dirt and debris this robot picks up.

The iLife A11 also does a really nice job transitioning from one flooring type to another, including rugs and carpet. The seamless transition ensures that the robot can run on its own without supervision or fear of getting stuck somewhere. Through all of my testing, the A11 never got stuck at my house or my parents' house. The mobility is incredible and the robot itself is powerful enough to overcome any obstacle.

The iLife A11 works with the iLife Vac Global app, but also comes with a very handy remote control for users as well. Unfortunately, I could never get the app to work on my phone. Without the app, I used the remote control and it was very user-friendly, at least once you learn what all of the buttons do since they aren't easily labeled on the remote itself.

The iLife A11 two-in-one robot vacuum and mop will be a great machine with a few additional tweaks to the mop. I really like that this is one device that can do both jobs for you and can run in the background of your everyday life. The vacuum's suction power and the machine's overall mobility are impressive. If the mop issues were fixed, it would make this a fantastic machine at a mid-level price range.

The following options are all highly rated and feature the same two-in-one technology that the iLife A11 offers. We think these are comparable options to consider if you aren't sold on the A11.

Hardware
Working in the VR: Fewer distractions, but not great for productivity, says study