June serves as Tech Editor of ZDNet, reviewing the latest consumer gadgets and sharing advice to make the most out of them.

The Neato D10 is the Tesla Cybertruck of robot vacuums. Just look at it. But unlike the EV, the Neato D10 proves that form is, in fact, over function. (It's also in stock and won't hold your deposits for years.)

With its D-shaped figure that's designed to clean as close as possible to walls and other straight-edged furniture, the Neato D10, in its design alone, is already a differentiator in a saturated robot vacuum market.

However, the cleaning machine is not without flaws. For one, it's pricier than most of the best robot vacuums that we've tested, and in some cases, vacuums that come with auto-empty docks. But for how reliable the Neato D10 is at deep cleaning, with no surveillance necessary, it may be all that you need in a smart cleaner. 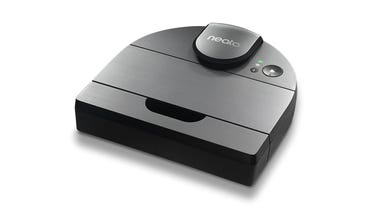 Spec for spec, the Neato D10 is as good as robot vacuums come. The 2,500Pa of suction power is in line with high-end machines from Roomba, Roborock, and Shark, and Neato gives you three power modes to optimize the D10's performance and battery life. Speaking of which, the 6,200mAh is one of the larger-sized capacities that we've tested, and Neato claims the robot will last up to 300 minutes of run time before needing a charge. We'll see if that holds true later on. Toss in smart home pairing via Alexa, Google, or Siri, and you have a recipe for a formidable robot vacuum.

The Neato D10 arrives packaged with all the tools and accessories you'll need to get started, including its lightweight charging base, a brush cleaner, and two extra sets of True HEPA filters -- promised to capture up to 99.97% of allergens and dust particles.

My unit came fully charged and ready to roll. The only thing left to do was pairing the vacuum to my phone via the MyNeato app, not to be mistaken with the Neato Robotics app. (The latter is for older models, such as the Botvac systems.) Pairing to the vacuum requires Bluetooth and inputting your local Wi-Fi credentials. Once that's done; however, the Neato D10 can be manually controlled via your phone whenever it's turned on.

The MyNeato app has a good variety of controls and features when it comes to functionality. You'll mainly use it to start the vacuum or dial between the three power modes: Eco, Turbo, and Max. But the app also displays your room layouts, zones, and no-go zones. Zones designate where the D10 can and cannot vacuum; a useful feature to have if there's an area with many cables and wires that you'd like the robot to avoid.

Besides the audio queues from the robot itself, you can also rely on the MyNeato app to understand the battery level of the D10 and what, if any, issues it may be experiencing. For example, the app will let you know if your floor isn't flat enough to vacuum or if the robot is performing a pre-cleaning LiDAR scan.

The Neato D10 stands out with its D-shaped form factor in a sea of circular robot vacuums. That, paired with the aluminum, brushed metal design, gives the robot an industrial and futuristic appearance that, as I mentioned, reminds me of the Tesla Cybertruck. Still, the D10 weighs about 8 pounds and is light enough to carry around rooms, floors, and levels.

The D-shaped design lends itself to two major benefits: cleaning area and dustbin size. With a straighter front side, the Neato D10 has a wider brush than typical vacuums and can therefore suck up dust particles and debris more efficiently. This is especially true when vacuuming the edges of walls and/or bookshelves.

Housed at the center of the robot is a rectangular dustbin with a 700ml capacity. Compared to the 400 to 600ml sizes of similarly-priced vacuums, the Neato D10 is favorable for cleaning larger rooms and spaces. But also, for small to medium-sized flats like mine, the 700ml size just means that you'll be cleaning the dustbin less often.

The robot's dustbin size is an aspect you shouldn't take for granted because the Neato D10 does not come with an auto-empty base station. Unlike most high-end models that are bundled with the companion accessory, you'll have to dispose the innards of the D10 manually every time. Fortunately, it's very easy to pop the dustbin lid up, give the HEPA filter a wipe, and pop it back in.

For on-device controls, the Neato D10 has a power button, an information and pairing button, and two LED indicators for Wi-Fi and battery. There's also a built-in LiDAR sensor to help the robot digitally map your room layout and avoid objects when roaming around. Using a LiDAR sensor, Neato says the D10 doesn't need a dedicated camera for object detection and can serve as a non-intrusive smart home gadget. You won't find any hidden cameras or mics on this robot. There is, however, a speaker, which the robot uses to communicate its boot-up, low battery signal, and errors.

The baseplate of the D10 is equipped with two brushes. The main Helix multi-surface brush is made to sweep up dust and debris off of any surface -- including hardwood, carpets, and tiles. At its aid, a 360-degree side brush spins leftover particles toward the center of the vacuum. You can detach and replace both brushes if ever needed.

My experience with the Neato D10's performance is very positive. During testing, the robot reliably picked up any bits and pieces that I left on the floor, including strands of hair, rice grains, and cardboard bits. Here's how it all works in practice.

There are a couple of nifty performance features demoed in the video. First, the D10 successfully detected the ledge between my kitchen tiles and the living room hardwood and kept itself safe. More impressively, it does so with little to no space and performs a k-turn maneuver to get back on track (as shown in the first half of the video).

Secondly, the D10 uses bump sensors, as heard by the clicking sounds when the vacuum makes impact with a wall or piece of furniture. The spring-loaded guard saves and registers the points of contact onto the MyNeato app so that the robot can adjust its route during future cleaning sessions.

Lastly, the Neato D10 produces, on average, 69dB of sound. It's not distractingly loud, especially if you have the vacuum set to Eco mode, but certainly not an appliance you'll want to leave on during a Zoom meeting. That's why I've gotten into the habit of scheduling the robot -- which you can do within the app -- as I'm preparing breakfast in the morning and at night when I'm showering.

The Neato D10 can switch between three cleaning modes: Eco, Turbo, and Max. As the name suggests, Eco saves you the most energy (battery life) in exchange for suction power. Naturally, it's also the quietest mode. For hardwood cleaning, I'd found Eco mode more than suitable for the job. But for carpets and rougher flooring, Turbo and Max mode were the way to go. Turbo kicks things up a notch with greater power and battery consumption, while Max mode, well...takes things to the max. That includes fan noise and suction.

In fact, I was bewildered by how effective Max mode was at sucking up dirt and debris from grooves and ridges I typically wouldn't be able to clean. See the image below for some mysterious specimens the Neato D10 was able to pick up during a maxed-out cleaning job.

On average, my cleaning sessions were about ten minutes long. And each time, the Neato D10 consumed about 3% of battery. That gives it an average lifespan of 333 minutes per charge, exceeding the 300-minute rating by Neato. Your mileage will vary, especially if you plan to use the Turbo or Max cleaning modes.

But when the Neato D10 does need to charge, it will automatically return to its charging base, top itself up, and navigate back to where it left off. Keep in mind that the robot cannot find the charging base adaptively, meaning if you move the charging base from where it was when the cleaning session started, the D10 will thoughtlessly head back to the original spot -- even if the station is no longer there.

The Neato D10 is an unnerving robot vacuum that is fully capable of cleaning the deepest nooks and crannies. At a retail price of $799, it sits in line with the high-end offerings from its closest competitors and ultimately makes you question whether the cost is worth the sacrifice of an accommodating auto-empty base. In most cases, though, we've found the robot discounted to just $599 (save $50 more with code 'ZD50'), which puts it firmly at the top in value for the money.

Along with our running list of the best robot vacuums, here are some worthy alternatives to the Neato D10:

Join Discussion for: Neato D10 review: The Tesla Cybertruck of...