One of the best new products I saw at South by Southwest 2010 is called Bump, which allows you to exchange contact information wirelessly. Here's what the company's co-founder had to say about it.
Written by Andrew Mager, Inactive on March 26, 2010

One of the best new products I saw at SxSW 2010 is called Bump. The concept seems simple: bump your phone with someone else's phone to exchange contact information.

I had a chance to meet the company's co-founder Jake Mintz and sit down with him for an interview.

Below you will find questions and answers, but the dialog doesn't stop here. Please leave questions for Mintz in the comments and I'll make sure I send them his way.

Mager: Bump is more than two people fist-pounding to exchange contact information. What projects are you guys working on?

Mintz: Our goal is to make it simple, intuitive, and fun to use your mobile phone to interact with people around you. My mobile phone has all my email, my calendar, my photos, songs, videos, apps...basically everything I care about.

But if you and I are standing next to each other, it is ridiculously difficult to get our phones to connect. This is the problem we're trying to solve at Bump, both with new features we're adding to the Bump app and also by opening up our technology for others to use in their own apps.

When two phones bump, software on the phone sends up a variety of sensor data to an algorithm running on the Bump servers -- data like the location of the phone, the accelerometer readings, the IP address, etc. The algorithm looks at all the bumps coming in from around the world and figures out exactly which two phones felt the same physical bump in the real world.

From there, Bump can simply route whatever information is to be sent from one phone to the other, or initiate any other type of interaction between the two phones. 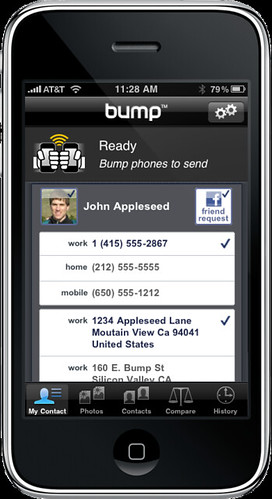 We built Bump to work on any mobile phone, currently we are iPhone and Android only, but we plan to expand to other platforms.

How are you using Bump with iPhone apps, particularly that Top 100 app you were telling me about?

Top100sRadio (created by nuTsie) is not in the App Store yet but should be soon. In Top100sRadio you can buy playlists for a couple dollars that let you stream hundreds or thousands of songs. They are using the Bump API to gift playlists, and are offering a discount for doing so.

So a playlist that might cost $1.99 to buy for myself I can gift to someone else for $0.99. This is really powerful, they are incentivizing people to share and using the Bump API to make it easy. There are lots of other ways people are adding bumping to their apps: it makes it easier to share, become friends, start a multiplayer game, give a virtual good, share an app, etc. And because you know the identity of the other person you can layer on incentives to reward people for certain behaviors like sharing that are valuable.

Can I use Bump to send money to someone?

Yes! One of the most exciting apps to integrate Bump is the new PayPal app. 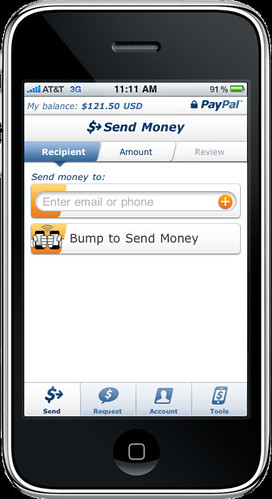 Say your friend owes you $11.75 for dinner. Instead of hassling with cash or keeping track of IOUs, you can now both whip out your iPhones and just bump the money right then and there, totally free of charge.

Since launching Bump, how have the public responded? Are people excited to use it?

We've been amazed at how quickly Bump has grown and the response we've had from our users. We recently passed 10 million downloads, which, in less than a year, makes Bump one of the most popular apps of all time. We get user feedback from people all over the world — one guy even claimed to have gotten his future wife's phone number using Bump!

Talk to me about metrics and instrumentation. You guys are doing some very specific analytics. What are you tracking, and what is it teaching you?

We have a lot of data about how people use Bump that has revealed some interesting stuff. For instance, our usage peaks on weekends and holidays, so people use Bump in social settings and when around friends and families. Also, people share about as many photos as contacts, despite there being a really easy way to share photos on iPhone (go to Photos and hit the share button to send in an email). It is really exciting that despite having a great built in way to share photos, lots of people every day prefer to share with Bump.

How big is the Bump team and where do you work from? Are you guys going to expand?

Bump is based in Mountain View, CA, right in the heart of Silicon Valley. We have about a dozen employees at the moment, but we're growing pretty quickly. We are hiring for several positions (see http://bu.mp/jobs) and are always looking for great Android and iPhone developers that fit in with our team.

The top level domain .mp resides in the Northern Mariana Islands. Any plans to visit and can Y Combinator write it off a "business" expense?

Haha — we *love* our domain name. We were complaining for a while about how bumptechnologies.com was so long and hard to type, so we decided to make it as short as possible. The folks over at Chi.mp were kind enough to help us get bu.mp (to get your own .mp domain, go to http://chi.mp/). Maybe one day we'll take a company trip to visit the birthplace of our awesome domain name.