UPDATED: Apple and HBO fibbed when the companies announced that HBO Now would be available exclusively in the United States on Apple TV and the App Store. True, HBO Now, for $14.99 a month, made its first appearance on Apple TV. But, the next day, Sling TV announced that it too will provide HBO Now at the same price to its customers.

Apple had claimed that HBO Now was an exclusive among "new digital distributors." By this Apple meant that rival Internet TV devices, such as Roku, Google's Chromecast and Microsoft's Xbox, couldn't offer the new service for three months. Sling TV though claims that "HBO will be available through all devices (e.g. Amazon Fire TV, Amazon Fire TV Stick, Roku players, Roku TV models, Xbox One, Android, iOS, Mac, PC) on which Sling TV is offered."

On both Internet TV broadcasting services, HBO Now will provide the same content that's already available on HBO GO, its online streaming system for its cable or satellite customers. Sling TV states that, like Apple, it will provide both linear real-time and Video-On-Demand HBO content. The only exception will be some live events, such as boxing. These presentations will be shown later over the Internet

Both will give viewers access to full seasons of old Band of Brothers, Sex and the City, and The Sopranos and new Silicon Valley, True Detective, and Game of Thrones, HBO exclusive content. In addition, HBO Now customers can watch movies showing on HBO.

At the same time, Sling TV is working on improving its service. Sling TV suffered a meltdown during the NCAA Final Four basketball tournament. It simply couldn't keep up with the demand. While Sling TV CEO Roger Lynch told re/code that "outages and quality issues only affected around 1,000 users," speaking as one of them with many cordcutter friends, it seemed like there were far more frustrated watchers than a mere thousand.

In the meantime, Sling TV is making "various enhancements to reduce overhead and load on our servers. This will allow us to provide a more seamless experience to all customers during periods of heavy viewership." 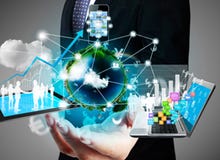 The Year's Best Tech for Work and Play ZDNet takes a look back at very best tech stories and features of 2014.

It better, because on April 12, Game of Thrones, HBO's wildly popular show, starts its next season. For last years's premiere, when HBO first put its toe into Internet broadcasting with HBO GO, the service failed for many users. Neither Apple nor Sling TV want a repeat of that performance.

In addition, Sling TV is adding parental controls across all channels that give customers the ability to manage TV shows by rating. The Dish Network subsidiary is also adding mini guide updates to make it easier for customers to find shows by subject/genre on the following devices: Amazon Fire TV, Amazon Fire TV Stick, Roku players, Roku TV models and Xbox One.

So, by this weekend you should have your choice of ways to watch HBO over the Internet. Perhaps the more interesting question for cordcutters is which company, Apple or Sling TV, will deliver the best streaming. The real test will come on Sunday April 12th when as many as a million viewers tune in to see what happens next with everyone's favorite anti-hero Tyrion Lannister; Daenerys Stormborn, Mother of Dragons; and Jon Snow at the Wall in the first episode of the new season of Game of Thrones.