How to block (or at least cut down on) robocalls

You can't block all the spam phone calls, but blocking some is better than blocking none.
Written by Steven Vaughan-Nichols, Senior Contributing Editor on July 26, 2019 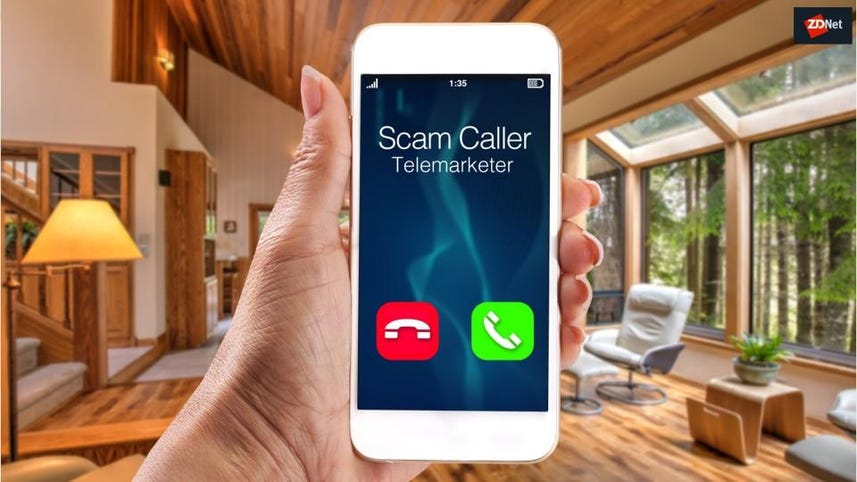 I hate robocalls. You hate robocalls. We all hate robocalls. We have good reason. According to Transaction Network Services (TNS), which manages data networks for such major telecoms as Sprint, US Cellular, and Verizon, a third of all cell calls are now spam. No wonder many of us have stopped answering our phones. But there are other ways to try to block the torrent of telephony terror.

First, though, while the Stopping Bad Robocalls Act has passed the House, laws won't stop robocalls. If that were the case then FTC's Do Not Call Registry would have made robocalls manageable. It didn't. I've been registered since 2010, and I've gotten three spam calls in the last four hours.

Nevertheless you might as well start with registering with the FTC. It's better than nothing.

To register with the Do Not Call Registry, just go to the website. All it asks for is the phone numbers you want to protect and your best e-mail. You'll be sent an e-mail informing you that you're now on the Registry.

You can also report robocalls to the FTC. I've done it, but nothing seemed to come of it. Some kinds of organizations can still call you even if you're on the registry. These include: charities, political organizations, surveyors, and bill collectors.

There's also a new protocol, Signature-based Handling of Asserted Information Using toKENs (SHAKEN) and the Secure Telephone Identity Revisited (STIR), which is Caller-ID on steroids. SHAKEN/STIR is a protocol for authenticating phone calls with the help of cryptographic certificates, so that when someone calls you, you can be sure that the name showing up on Caller-ID really is the person calling. It also lets your phone company know, in theory, who's responsible for a particular robocall. This service will work with both landline and cellular networks.

Sounds good, doesn't it? Well, it does, but implementing it is going to take years. In the meantime, it's up to us to block bad callers from our phones.

First, you can manually block repeat offenders on both your Android and iPhone. On Android phones, the methods vary. One common way is go to your recent calls screen and pick the bad number you want to block. Then, tap More. This should give you the option to block the number or block/report spam. Do so and then confirm.

Another common way to block the baddies on Android is to go to your settings page. From here, scroll down to call or call settings, there you may find a setting for call rejection, scroll down to the auto-reject list, and choose to create a new record. On phones which support this you'll need to key in the number you want to block and then save it.

It's easier on iPhones. Just open the Phone app and tap on the Recent Calls icon. Find the number you hate and tap on its Info icon. This will give you the option to Block this Caller. Then, when it asks if you're sure, tap on the button to Block Contact.

This is still a nuisance. So, here's what the phone companies offer, which you can use to keep annoying callers away.

AT&T's offering is called AT&T Call Protect. The free version automatically blocks calls from likely fraudsters, identifies telemarketers and other suspected spam calls, and lets you to set up your own blocked list. For $3.99 per month, Call Protect Plus identifies incoming calls by name and location; has built-in reverse-number look-up; and lets you block specific classes of robocalls such as a telemarketer or a political call.

Sprint doesn't have a robocall program per se. Instead, you can use Sprint Premium Caller ID to see information about unknown callers. Armed with this you can decide if you want to accept or ignore a call. The service costs $2.99 a month.

T-Mobile offers three robocall-blocking services. The first, Scam ID, is essentially caller ID. The second, Scam Block, blocks known scammers. These are both free. Name ID includes the above. It also enables you to block calls for all the numbers on your service and block or send categories of calls directly to voicemail. This service costs $4 a month per line.

Verizon's free offer is Call Filter. It labels spam calls and automatically blocks them. You can either block all potential spam calls or just "high risk" ones. For $2.99 a month per line you can add a custom block list, reverse number lookup, and reverse-number lookup.

I use Verizon Call Filter myself and it helps. But bad callers still slip through.

So, I back up Call Filter with the Google Pixel specific Call Screen. This is built into Pixel smartphones starting with the Pixel 2.

With Call Screen, when you get a suspicious call, you tap "screen call" on your home screen. Google Assistant then answers the call and asks for the caller to tell you who they are and why they're calling. Google then makes a real-time transcript. You can then answer it, ignore it, or report it as spam. That number will be then be blacklisted on your phone so it can't be used to call you again. You're still interrupted by the first call for as long as it takes to hit the button, but afterwards you won't hear from them again.

There are also numerous third-party smartphone robocall killers. These all work in similar ways. Each service keeps a database of known spammers. When a call comes in, it checks the caller to see if they're a bad actor. If it is, it will block the call.

Before even subscribing to any of these services, you should know that none of these are perfect. In my experience, they'll spot a hostile caller about two times in three.

Most of these services offer at least a free week. I strongly suggest you try before you buy.

Nomorobo is one of the oldest call-blocking programs. When a call comes in you can let it be forwarded to voicemail or block it as spam. Nomorobo can also deal with spam text messages. Unlike most robocall killers, you can also use Nomorobo with VoIP landlines. If you're still on copper, sorry, you can't use it. Nomorobo is free on landlines and $1.99 a month on mobile.

Hiya Caller ID and Block only works on Android and iPhones. Its special feature is that it detects spoofed calls, which use a similar number to your own number. For example, I often get calls from "people" with the same area code and prefix. The prefix is the three numbers between your area code and the last four numbers, which make up your line number. Hiya spots these in case I don't.

You may be already using Hiya and not known it. The company's software powers robocall protection for AT&T, Samsung, and T-Mobile.

Hiya's basic app won't cost you a cent. The premium edition's spam database is larger and is updated more often. It costs $2.99 a month or $14.99 a year.

The most amusing robocall killer is RoboKiller. Besides blocking spammers, it gives them sass back via its Answer Bots, which can waste their time with nonsense conversations. You can either use one of their selections or come up with one of your own. Robocall revenge can be sweet.

I'm going to be frank with you. Even with a combination of services, you're still going to get robocalls. But with the right mix you can cut them down considerably. It's not perfect, but it's better than doing without these services.

How to safely attach a GoPro to your car or truck

How to safely attach a GoPro to your car or truck