Chinese telecoms giant Huawei is building a $200m R&D centre in the UK as part of a $2bn investment plan.

The networking-to-smartphones company currently employs around 80 R&D engineers in its existing office in Ipswich, and will increase that to 300 staff in the UK by 2017. Huawei is now the largest telecommunications equipment maker in the world, employing more than 150,000 people worldwide. 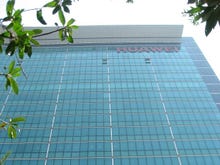 Life at Huawei's Shenzhen HQ: In pictures The Chinese tech giant drafts engineers straight from universities around the country to drive its huge R&D effort. What do they find when they get to Shenzhen - and more to the point, what are the canteens like?

Last month Huawei said it intends to create at least 5,500 new jobs in Europe over the next few years as it focuses on tapping into European telecoms markets. It has stepped up its focus on Europe over the US after facing suspicion about its historically strong ties with the Chinese state and military.

For example, in October last year in the US, the House Permanent Select Committee on Intelligence published a report which said the risks associated with provisioning Huawei equipment as part of the country's critical infrastructure "could undermine core US national-security interests" — claims which are denied by the company.

Earlier this year, UK politicians called for an urgent review of checks on networking equipmen t supplied by Chinese telecoms giant Huawei for use in the UK's critical national infrastructure.

The UK government also said social gaming company Rekoo will become the first high-profile Chinese tech company to set up in London's Tech City. Rekoo has more than 15 million gamers who play its games daily and 10 million on smartphones, and will initially have 10 staff in its London office.

The investment plans were announced during chancellor George Osborne's visit to China to promote UK tech businesses. The government hopes that UK businesses specialising in areas such as smart cities, e-health and education tech will be able to benefit from selling into China's gigantic market.

As such, a delegation of UK tech companies has travelled with Osborne, with the aim of introducing UK companies to what it described as the 'gatekeepers' to online Chinese consumers such as Sina Weibo and Tencent or search engine Baidu.