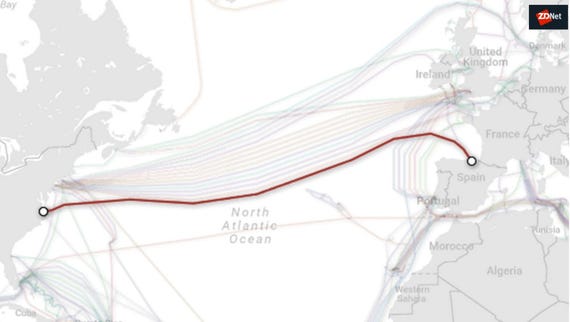 Marea: The ocean-spanning cable that will build muscle for Facebook and Microsoft
Watch Now

Microsoft, Facebook and Telefonica have hit a key milestone in delivering their new trans-Atlantic subsea cable with a data capacity of 160 terabits per second.

Telefonica subsidiary Telxius has finished laying the Microsoft- and Facebook-backed Marea subsea cable, which stretches 4,000 miles (6,600km) across the Atlantic ocean from Virginia Beach, Virginia, to Bilbao in northern Spain.

Microsoft boasts that its 160-terabit/s cable is 16 million times faster than your home broadband and could stream 71 million HD videos simultaneously. The cable contains eight pairs of fiber-optic threads wrapped in copper.

Telxius, which will operate the cable once it goes live, began construction in August 2016.

Marea, Spanish for 'tide', offers Facebook and Microsoft more global capacity for their data services, but also improved resilience thanks to landing at different points to most networks, which on the US side come ashore around New York and New Jersey.

The route is south of existing transatlantic cables. Microsoft of course has a massive data center in Virginia too, on which it's reportedly spent $1.1bn. Facebook and Amazon also have data centers there.

Marea continues the trend of tech giants investing in their own high-capacity subsea cables, rather than merely leasing them from other operators.

As Wired noted recently, the Marea cable noteworthy in that Microsoft and Facebook have more control over its future than if they joined a consortium of telecoms providers, as Microsoft did with six Asian telco firms to launch the New Cross Pacific Cable.

They also don't need to share capacity with other telecoms providers. Google, meanwhile, has backed the 60-terabit/s Faster cable, which spans 5,600 miles (9,000km) between Japan and the US west coast and gives Google exclusive access to part of its capacity.

According to Microsoft, Marea is the highest-capacity connection of more than a dozen trans-Atlantic subsea cables. Marea also connects to nearby Sopelana, which links up with fiber networks connecting to other major European hubs like Paris, Frankfurt, Amsterdam, and London.

Microsoft also points out that Bilbao offers a convenient path to hubs in Africa, the Middle East, and Asia.

For Microsoft, the cable will help it improve its various cloud services, such as Azure, Office 365, Skype and Xbox Live. Facebook says it will help it improve the "increasingly data-intensive services" that it provides through WhatsApp, Messenger, Facebook, and Instagram.

The cable is expected to become operational in early 2018, according to Microsoft.

Using a Facebook-owned transatlantic cable, Nokia demonstrated its ability to ramp up subsea spectral efficiency by 2.5 times with a novel technique.

Linking Finland and central Europe, the new Northern Digital Highway or C-Lion1 submarine fiber-optic cable is being described as the largest-capacity connection in the world.