It will also create a reimbursement fund to pay those that rip out the prohibited equipment.
Written by Campbell Kwan, Journalist on March 15, 2020 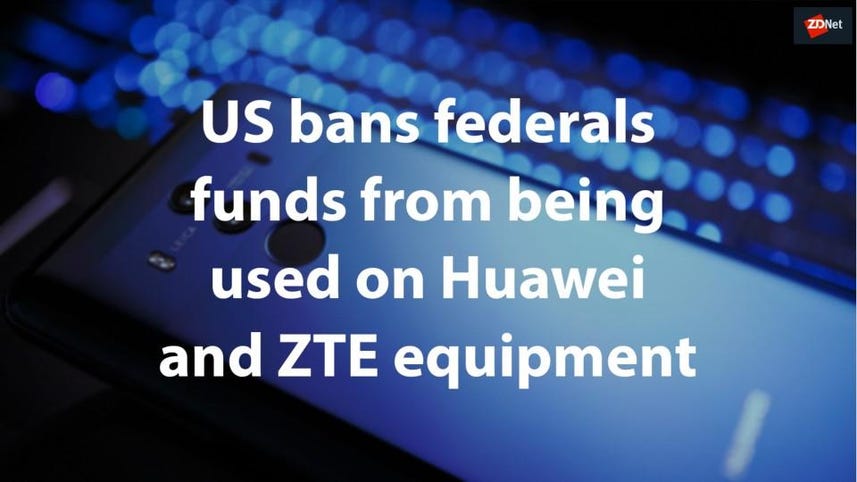 United States companies are officially banned from using federal funds to purchase equipment from companies, such as Huawei and ZTE, that have been deemed as national security threats.

Signed by US President Donald Trump last Thursday, the now-ratified Secure and Trusted Communications Networks Act prohibits federals funds from being used on equipment made by these companies.

"This legislation will help protect our telecommunications infrastructure by prohibiting the use of federal funds to purchase equipment from companies that pose a national security threat," a White House briefing release said on Thursday.

The laws also establish a $1 billion reimbursement program, called the Secure and Trusted Communications Networks Reimbursement Program, to help smaller providers with the cost of ripping out and replacing the prohibited equipment from Huawei and ZTE.

The United States Federal Communications Commission's (FCC) has been collecting data from US carriers that use network gear from Huawei and ZTE to help it reimburse smaller and rural carriers for those costs.

"Now, I hope Congress will build on this success and move forward quickly to appropriate the necessary funding to reimburse carriers for replacing any network equipment or services found to be a national security threat."

The two Chinese tech giants were designated as national security threats by the FCC in November when the commission made the decision to ban telcos from purchasing Huawei and ZTE equipment through its Universal Service Fund (USF). The USF provides over $8.5 billion a year in subsidies to help telcos provide adequate broadband to rural Americans that currently lack access.

Huawei is currently getting ready to fight the USF ban in court, having raised a lawsuit against the FCC in December for allegedly circumventing due process by labelling the company as a national security threat.

"Banning a company like Huawei, just because we started in China -- this does not solve cybersecurity challenges," Huawei's chief legal officer Dr Song Liuping said at the time.

Song also claimed that both FCC chair Ajit Pai and other FCC commissioners failed to present any evidence to prove their claim that Huawei constitutes a security threat, and used words like "backdoors" to scare people.

Separately, ZTE is reportedly being investigated by the United States Justice Department for possibly bribing foreign officials to gain advantages in its worldwide operations, which could make Chinese network equipment maker subject to another wave of criminal penalties.

The investigation follows the company being found in 2017 to have violated United States sanctions on Iran, which led to ZTE being temporarily banned in the United States and fined $892 million. ZTE experienced a big hit to its revenue as it lost over 5.3 billion yuan during the quarter that immediately followed the penalties.

Google warns users of new Huawei devices not to try sideloading its apps, which are simply not available to them.

The Chinese telecommunications company aggressively pitches the suitability of its 5G portfolio for European markets.

'Contracting with the federal government is a privilege, not a constitutionally guaranteed right,' according to a US District Court judge.

US charges Huawei with racketeering and conspiracy to steal trade secrets

US updates charges against Huawei, adds racketeering and IP theft allegations against the Chinese telco provider and its CFO.