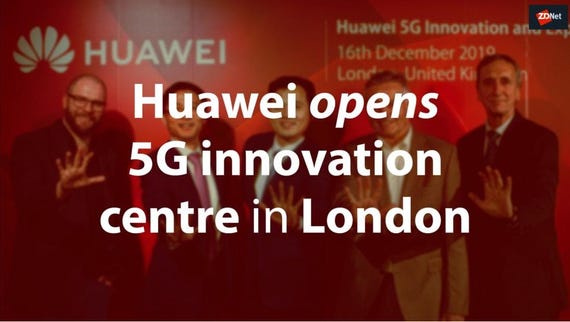 As European governments consider the level of Huawei's involvement in their 5G infrastructure, the Chinese telecommunications company has made it clear that Europe needs Huawei's 5G products.

During a press conference in London, the message from executive director Ryan Ding was unequivocal: Huawei knows what European network operators want, and is ready to cater for their needs.

"In Europe, a lot of operators have limited site locations and resources," said Ding. "We are the only vendor that provides a solution to this. We welcome competition, but at the moment we can lay down our products on the table and ask: 'When will our competitors do the same?'"

The executive took to the stage to unveil a range of new 5G infrastructure products, all of which could meet challenges that are specific to the European region. The lack of space for antenna installation? Huawei is launching a version of its Blade AAU antenna that can support 2G, 3G, 4G and 5G, and essentially work under all sub-6GHz frequency bands.

To make sure that 5G base stations can be "built quickly and directly in Europe", the company is releasing a new super-light pole, which weighs about 25kg compared to the industry standard of 40kg, and only takes two engineers and a couple of hours to install.

But the biggest challenge yet, Ding said, is Europe's fragmented radio frequency spectrum. European countries allocate slices of spectrum to network providers through auctions, and spectrum is especially segmented in Europe thanks to the large number of co-existing national operators.

In response, Huawei has launched an antenna with larger bandwidth, capable of supporting the coverage of several suppliers at the same time. Where on average network operators work with 200MHz of spectrum, the new antenna can support 400MHz -- twice as much as its predecessor.

Huawei said that its new product is "one generation ahead" of the rest of the industry, and will come in handy in fragmented spectrum markets such as the UK, Spain and Italy. According to Ding, a 400MHz service was, in fact, a specific requirement put forward by European operators.

"We have tried to understand the requirements of customers," Ding said, "and providing a carrier aggregation for 400MHz is a very viable solution, especially in Europe, where in most countries the spectrum is very segmented."

The cherry on the cake came in the form of a $20 million investment into a "5G partner innovation program" to be launched in the UK, to fund and accelerate the adoption of new 5G applications.

Given Huawei's recent troubles with the US, it's easy to see why it's keen to woo European countries. Last year, the Trump administration added Huawei to its Entity List, effectively banning American companies from dealing with the Chinese company.

The US government argues that the use of Huawei equipment in sensitive networks could leave the country at risk of being spied on by the Chinese state. Although Huawei has denied the claims, the Trump administration has been advocating a total ban on the use of Huawei's 5G equipment.

As yet, there's no Europe-wide consensus on the matter. After much deliberation, the UK recently allowed Huawei to provide some equipment for the country's 5G networks, albeit under certain restrictions. While Ding was selling the benefits of Huawei's 5G portfolio in London, in fact, the UK's Department for Digital (DCMS) announced a £30 million ($38.7 million) investment for an open competition to develop new uses of 5G in rural areas, and it looks like Huawei won't be allowed to participate.

France is still sitting on the fence, although in November it was reported that ministers would allow the Chinese company a role in the country's 5G deployment. Meanwhile, Germany's ruling CDU party has been pushing for tougher rules on foreign vendors.

Ding said that Huawei was committed to providing secure products, and that, with each European country working on their own local policies, the company is "continuously communicating with national governments on security".

SEE: Huawei was the top 5G smartphone vendor in 2019

However, Huawei wants to stress that it's confident for the future. The company said that it now has 91 commercial 5G contracts, with over half of them (47) based in Europe. In comparison, Its main competitor, Ericsson, has secured about 50 commercial contracts globally.

"Last year, we were saying that we are 18 months ahead of our competitors," said Ding. "And 12 months later, I can say with certainty that Huawei still has that leadership."

Others beg to differ. This week, the US State Department's deputy assistant secretary for information policy Robert Strayer reportedly said that it was "necessary to demystify" the idea that Huawei is more advanced on 5G. Strayer argued that Ericsson, Nokia and Samsung are "on par" with the Chinese telecommunications provider.

And at a press event organised by Ericsson last week in London, the company's senior vice president Stella Medlicott was adamant that Huawei has no technical leadership in 5G: "There is a need for myth-busting. We are not 18 months behind on the tech," she said.

The fight between 5G providers is on, with Europe a key battleground for Huawei.