The past year in tech has, as ever, been full of surprises. Here we've looked back at some of the key numbers that made headlines in 2012. 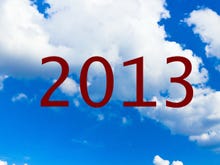 An Israeli hacker named Hannibal claimed he had access to 100,000 Facebook accounts after stealing log-on details from Arab users. In fact the actual number of login details he managed to obtain was closer to the 20,000 mark, many of them having proved invalid.

HP coughed up $30.41m in compensation for ousted CEO Leo Apotheker. Meanwhile, his successor Meg Whitman picked up $16.52m in total compensation, bringing the company's total spend to nearly $47m. Unfortunately for HP, it wasn't the only big number they had to write off this year.

Justin Bieber had his Twitter account hacked when someone Tweeted to his 19 million followers: "19 million my ass #biebermyballs." The hacker also started blocking and unfollowing many of the Canadian popstar's followers.

Raspberry Pi distributor RS Components said a quarter of a million people were attempting to get their hands on the cheap, credit-card sized Linux computer in April. The Corby-based electronics distributor had not anticipated the huge level of demand and ended up making hobbyists and fans wait weeks and even months to get their hands on the device.

May - Oracle told it may only win $150,000 in compensation from Google

In what was once touted as a $6bn case, Oracle was told it might end up with only $150,000 in statutory damages after accusing Google of patent infringement. A month later, it filed a petition asking Google to pay $0 in statuatory damages - but only so that Oracle could expedite its plans for an appeal.

Computing fans marked the centenary of the birth of computing pioneer Alan Turing on 23 June. The Science Museum in London staged an exhibition to celebrate the life of Turing, whose work helped end World War II and laid the groundwork for today's computers, while helping to set the standard for artificial intelligence.

Cisco bought video software company NDS for $5bn in its fifth acquisition of the year, in a bid to accelerate the Cisco Videoscape platform.

The Year in Review

BT added 100 additional Wi-Fi points along a 27-mile stretch of the River Thames at popular tourist sites such as the London Eye and the Cutty Sark in Greenwich to bring the total number of hotspots in the capital to 500,000 during the Olympics. BT also said its network at the Olympic Park had carried 1,150 terabytes of information in total during the Games, with peak traffic at 6.71Gbps.

Apple sold five million iPhone 5 units on its launch weekend. However, some analysts had predicted it would sell between six and 10 million, proving that you can't please everyone.

Facebook reached the one-billion user landmark and revealed it had 600 million mobile users. But ZDNet questioned how it will monetise the vast amounts of information it is obtaining from its users.

HP took an $8.8bn writedown after buying Autonomy for $11.1bn in 2011, subsequently alleging financial improriety - something Autonomy's former managers have vehemently denied. CEO Meg Whitman has since come out and said that HP will still back software company Autonomy 100 percent.

When Google Maps was reintroduced to Apple's iOS platform, it gained 10 million downloads in less than 48 hours. The launch of the app came after Apple was heavily criticised for its own mapping service, which CEO Tim Cook publicly apologised for.

Join Discussion for: 2012: The tech year in numbers