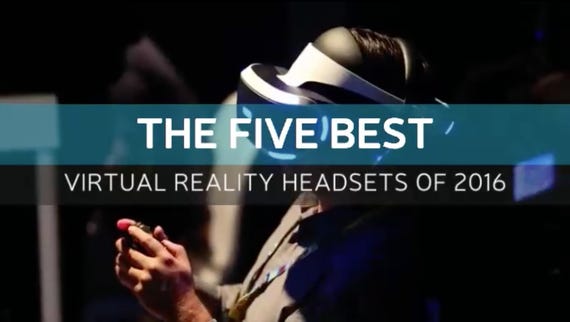 Virtual reality isn't some weird concept coming in the distant future. It's here.

It's been a major year in VR, with many consumer options now on the market from big hardware players in time for Christmas 2016's shopping rush.

We saw the breakout of Facebook, Google, Sony, and others with their first headsets aimed at the masses. Hardware domination isn't the only goal, as firms want to get ahead on the software and platform side as well.

There are likely to be even bigger breakthroughs in virtual reality coming to consumers in 2017, and we are likely to get a taste of it at CES 2017 in January.

However for this holiday season, here's what's available to buy.

Google Daydream View: Google's take on VR is the newest on the block, released alongside its Pixel and Pixel XL smartphones in October. The Daydream View is Google's model for VR and its Daydream platform, complete with a design reminiscent of clothing and motion controller for pointing in VR.

Google sells Daydream View for $79, and comes in slate, snow, and crimson colors. With Google's new smartphones, you simply lay them in the front of the headset and NFC takes care of pairing. Daydream View is among the simplest to setup and use -- not to mention the cheapest for a mobile VR experience.

Currently, Daydream View offers apps and games, including YouTube, Hulu, and Home Run Derby, through Daydream software. It looks like Google wants to launch a VR equivalent of Android, and Daydream View is a way of starting the move.

Sony PlayStation VR: One of the main attractions on the shelves this year is Sony's PlayStation VR, thanks to being relatively cheap and its compatibility with the PlayStation 4. It's already in millions of home theatre setups.

PlayStation VR is available for $399 as a standalone unit. To get the full experience, you'll need a PlayStation 4 and motion tracking controllers. All in all, you're looking at about $700 to get Sony's VR experience up and running in your living room.

Sony debuted a nice list of launch titles when PlayStation VR launched in October, along with a theatre mode for movies purchased through Sony. It has promised more content and games in 2017.

Samsung Gear VR: Released in November 2015, the Gear VR is Samsung's take on virtual reality in collaboration with Facebook-owned Oculus.

Compatible with the Galaxy Note 5, Galaxy S6/S6 Edge/S6 Edge+, or Galaxy S7/S7 Edge, the Gear VR mounts a Galaxy to act as a controller and display.

While likely due for an update alongside the Galaxy S8 next year, the Gear VR will get the mobile VR job done, but it's not as comfortable as Google's offering.

Oculus Rift: While Oculus was one of the first major players in the VR space, it didn't release a consumer headset until March 2016. Facebook-owned Oculus has included Oculus Touch controllers for hand movement and physical buttons to play classic games.

The Oculus Rift is available for $599 with some pretty hefty Windows PC specifications required. In CNET's review, our sister site noted a strong collection of software offers many apps to explore. You're getting a hardcore VR experience.

HTC Vive: While HTC's mobile business is struggling to capture consumer attention, its VR business is headed in the right direction. The HTC Vive was released in April 2016, and like the Rift, features two wireless handheld controllers.

The HTC Vive also has support of Valve, a major player in the gaming industry. An HTC Vive add-on released in November makes it possible to use the headset without wires. However, it does require a hefty PC setup to power, and boasts SteamVR tracking to know whether you are playing seated, standing, or in a "room-scale" space.

HTC's headset has a feature called Vive Phone Services, which lets you send and receive calls and text messages and check on your calendar without taking off the headset.

This is how virtual reality could go spectacularly... SEE FULL GALLERY