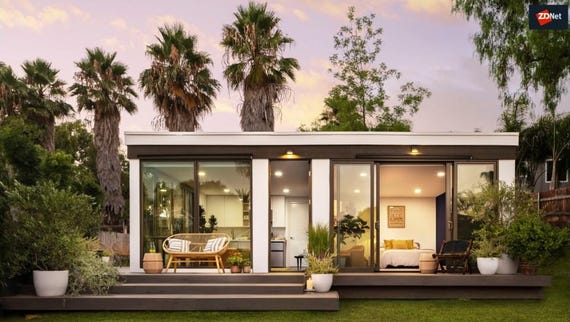 Robots, drones, and now 3D printers. Automation is coming for the construction industry, and as I've written, the $15.5 trillion global industry is long overdue for an efficiency-minded technological intervention.

A startup called Mighty Buildings is taking the concept to the extreme plans to automate up to 80% of the building process in its factories using 3D printing. It claims it can produce structures with 95% fewer labor hours and twice as fast as conventional construction.

This is as much a story of materials science as it's one about robots. The increased automation is thanks to a proprietary composite material used by Mighty Buildings' 3D printers. The company can print more of the building structure than previously possible, including overhangs and roof structures. Robots help add interior and exterior finishes, while humans are left to do the detail work that's still beyond the grasp of production-scale automation.

This sort of production line actually has a ready analog that's been a success story for going on 70 years: It's how cars are produced. The difference is that 3D printing reduces the need for standardization that burdens traditional automation, leaving room for design variation even within a production-minded operation.

This is hardly the first time 3D printing has been used for structures. In 2018, I wrote about researchers at the University of Nantes, which unveiled a prototype 3D-printed, robot-built home. The house, which took about 18 days to build, was made of a combination of polymer and concrete, which the Nantes researchers said would keep it insulated for decades.

But Mighty Buildings is novel in its extension of the concept to a commercial enterprise. By combining 3D printing and prefabrication, it's created what seems to be a highly-automated, efficient, and design-friendly process.

"Because we're building homes for people to live in, we've been very deliberate in carrying out our vision to make housing better. This isn't software that can be debugged on the fly," says Slava Solonitsyn, Mighty Buildings' CEO and co-founder. "We're now ready to scale our production with full confidence in our certifications and code compliance for both our material and technology."

The innovative approach and efficiencies in terms of both time (a studio unit can be printed in under 24 hours) and money (the homes evidently cost up to 45% less than comparable stick-built houses) has attracted investment and accolades. The company graduated from Y Combinator in winter 2018 and has raised a total of $30 million from Khosla Ventures, Y Combinator, SV Angel, and CoreVC, among others. It's also certified under California's Factory Built Housing program and was the first company to achieve certification under the UL 3401 standard for evaluating 3D-printed building structures and assemblies.

Now comes the hard part, which is bringing 3D printed homes to market successfully. So far, Mighty Buildings has installed its first two accessory dwelling units in San Ramon and San Diego, with additional units awaiting delivery. But the concept is promising, particularly as housing costs rise and large cities, including Los Angeles where I live, face a major housing crunch.

"With a strong foundation in robotics, manufacturing, and sustainability, the Mighty Buildings founding team knows the different facets of the issues that face modern housing," says Eric Migicovsky, Partner at Y Combinator. "Accessory dwelling units are just the start in further building out their unique approach to building."