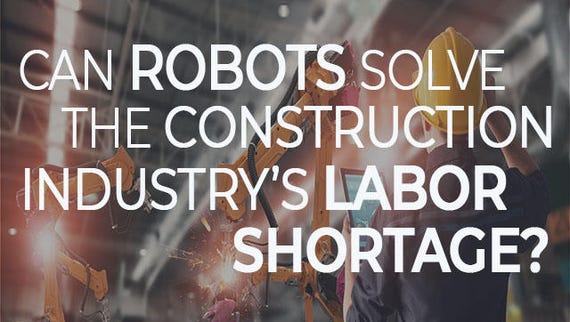 A Turkish architecture firm is sharing plans for a new Robot Science Museum in Seoul, which will be constructed using robots. First reported by Dezeen, the Seoul Metropolitan Government has commissioned the building as a kind of robot museum, which makes the use of robot builders a mind-bending meta statement on 21st century technology worship.

It's also a fitting symbol of the trajectory of one of the most important industries on earth: Construction. The global construction market could billow to $15.5 trillion by 2030 and is a key driver of economic vitality and wellbeing. Yet the sector is beset by labor and productivity shortfalls and has not kept with innovation.

Robotics firms have taken note. A new generation of machines readymade for the job site is already transforming construction, and there's a whole more in store for the way humans build things.

Why construction has to change (and fast)

After a long slack period following the recession, construction has been booming for the last few years with no signs of slowing down. The bad news is, in a tight labor market, construction is facing a massive labor shortage.

It's happening globally. In Japan, where the population in general is aging, the sector is down more than a million employees. In the U.S., 91 percent of construction managers surveyed in the latest Commercial Construction Index reported having a difficult or moderately difficult time finding skilled workers.

The reasons are simple. Construction is dirty, it's one of the most dangerous sectors in the world, and it's volatile and subject to macroeconomic pressures and market whims. As a result, young people just haven't been filling hardhat jobs.

The other elephant in the room is productivity. Stunningly, productivity in construction has actually fallen in half since the 1960s. The sector has not kept pace with innovation. The diesel-powered hydraulic machines you'll find on most construction sites today remain essentially unchanged since the Panama Canal was built.

As a result, there are massive inefficiencies in the industry. According to KPMG's Global Construction Survey, just 25% of projects came within 10 percent of their original deadlines. When it comes to megaprojects, like large infrastructure projects, McKinsey found that 98% are delayed or over budget. 77% are more than 40% behind schedule.

Robotics companies are seeing a lot of opportunity, and they're responding with rapid innovation.

We have the technology

Construction sites are the logical next step for industrial automation. Industrial robots got their start in auto factories and spread through heavy industry. These were highly structured environments where robots could be physically separated from people.

One of the biggest innovations across automation in the last decade or so is summed up in the notion of collaboration. That is, the idea that humans and robots can work side by side.

Collaborative automation has been aided by the convergence of technologies like IoT and distributed sensors throughout a robot's body, computer vision & 3D vision, and open-source operating ecosystems like the Robotic Operating System, which serves as the foundation of a lot of new autonomous systems. Collaboration has prompted the spread of robots out of rigid factories and into semi-structured environments like logistics and fulfillment warehouses.

At the same time, there's been massive development in autonomous driving technology over the last few years. Roads and highways are unstructured and highly unpredictable environments, and autonomous vehicles aren't quite ready for prime time, but the technology is impressive.

Construction sites occupy a middle ground between structured and unstructured environments, so it makes sense that robotics technology is evolving to work in that space. Technology from autonomous vehicles is making its way onto construction sites while collaborative technology is advancing beyond fulfillment warehouses. In other words, automation is converging on the job site.

Add to that the fact that robotics in particular is poised to benefit from 5G mobile networks. Better connectivity will make it easier to have multiple robots working together in real time.

The most fascinating thing about the move toward automation in the sector is the diversity of the technology coming out.

Some of these robots are simply automated versions of existing equipment. For example, a company called Built Robotics is using technology from self-driving cars to create bolt-on retrofit kits for existing heavy equipment like bulldozers.

There's also a class of technology that's partially automating tasks that have always been done by humans. In Japan, where just 10 percent of the construction sector is under 30 years old, Shimizu, one of the country's biggest construction firms, has created Robo-Welder, which uses lasers to autonomously weld steel, Robo-Carrier, which can carry heavy supplies to different locations on site, and Robo-Buddy, which bolts panels to ceilings. All of those are dangerous but crucial jobs.

A homegrown robot we've heard a lot about is a semi-autonomous masonry robot called SAM100, which lays bricks under the supervision of human bricklayers.

Then there's an exciting category of robots that are actually innovating how construction is done. In that category you have companies like Doxel, which makes drones that continuously scan construction sites using LiDAR and HD cameras in order to spot in real-time where project delays are happening.

Researchers at Nanyang Technological University in Singapore working on swarm robots that can 3D print concrete structures. 3D printing in general, which is a robotic process, is being used to design built elements in construction projects. Architectural facades, for example.

Maybe my favorite examples of technology that's actually changing how construction works are exoskeleton suits, essentially human augmentation devices that allow workers to lift heavy objects or least take strain off human workers as they lift heavy tools. The idea there is to get the most out of human workers that you safely can.

Ekso Bionics in the Bay Area, which makes powered exoskeletons for rehabilitation, has a passive device for industries like construction. In Utah, a company called Sarcos has a couple exoskeletons. One, the Guardian GT, is a pair of robotic arms a user controls by moving their own arms in a master unit. The other, the Guardian XO, is a full body electric suit that turns mere mortals into something like Iron Man.

The biggest challenge facing robotics firms will be to convince an industry that hasn't innovated in a hundred years to adopt automation technology. It's not just a use case argument. These systems are pricey, meaing big financial outlays on emerging technology. Construction companies come in all shapes and sizes and the sector is broadly fractured, so it'll be interesting to see how robotics companies target customers.

The other hurdle is regulatory. Construction is a complicated sector. There's government oversight and there are typically union workers on big jobs, so it's a field that requires a deft understanding of the market. that's going to make it hard for new players to break in.

One company that's providing a compelling roadmap is Sarcos, which makes exoskeletons. Sarcos has invited big legacy companies onto its board, including Caterpillar and GE. That's a remarkable braintrust for a company entering a sector as complicated as construction.

Regardless of challenges, however, automation is already making its way onto job sites. With labor shortages looming, a huge change is inevitable across the industry.