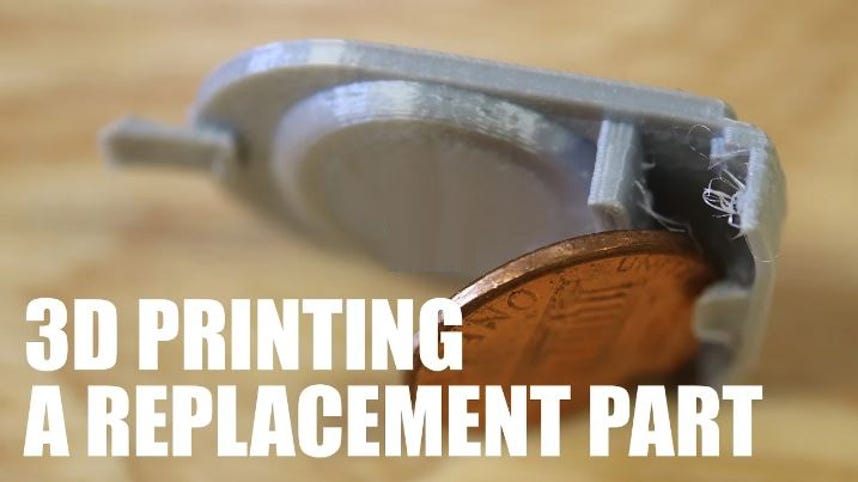 3D printing is often touted as a great tool for designers to test and refine their designs prior to manufacturing. But you can do a lot more with 3D printing, even with inexpensive home printers. For example, you can use a 3D printer to create and produce a replacement part for something you use every day. In my case, I made a replacement back cover for a remote control.

I have a desk fan I use all the time, the Vornado Flippi V Compact Air Circulator. It lives a few feet away from me, under my desk. It's small, powerful, and quiet. What makes it particularly useful is a remote control I can use to adjust the speed and oscillation, without ever moving away from my keyboard. This is great because I can turn it on and off when on the phone, or just tap the remote control when I'm too busy or lazy to move the five feet from my chair to the fan.

The problem is that I drop the remote all the time, and the back cover for the battery compartment tends to fly off and get lost. It really interrupts workflow to have to crawl around under my desk to look for the tiny part.

Now, don't get mired in the details of this particular project. Instead, keep in mind the idea of making any replacement part. Obviously, whatever you need to make will be different from what I worked on. The key point is that a 3D printer can be a great resource for useful projects like crafting replacement parts for objects you use. Lots of people lose a part or two from a beloved object.

After dropping the remote for probably the 20th time, and not being able to locate the cover to the battery compartment after a long search, I decided enough was enough.

It's probably still somewhere down there, under my desk, unless the elves have taken it. I decided to make a new one.

I'm fortunate, because I have a number of 3D printers in the shop to choose from. If I weren't writing about 3D printing, I'd probably only have one. For this project, I chose to use the most inexpensive of them, the $399 New Matter MOD-t. The MOD-t isn't as fast as the LulzBot or the MakerBot, nor does it create objects of super high quality, but it's a fine little printer.

I was curious about whether I could use it for this purpose. The cover is quite small, making it possible to do a lot of print attempts. Each print only took about 20 minutes. Because I spent just a few minutes each time refining the design, the print time for each "draft" didn't bother me at all.

The key to the design was exploring and understanding the geometry of the cover. That may sound difficult, but all it really takes is observation, measuring, a little creativity, and the willingness to test.

The basic shape is that of a rectangle with a half-circle at the end. So I created a rectangle and circle in 123D Design and placed the circle over the rectangle. I then shrunk the thickness to 1.5 millimeters.

To get the width and length of the cover space, I used a pair of $29.95 digital calipers I picked up from Harbor Freight. Calipers are key, because they allow you to measure the distances for elements you need to make. You can usually get measurements down to a tenth of a millimeter, which is pretty precise. Of course, my measurements were always off by a bit, so once I designed the object based on my measurements, I had to print it, and then tweak the print to get things to fit.

First, I printed the basic shape, the rectangle and circle.

Then I added a tab, so that it would fit in the slot in the remote. This took a few tries, because I had to get the right size, but also get the raised part to fit just so. It also wasn't hard. It just took the patience to tinker with it.

Next, I added the back hook. If you look at the image below, you can see the slot on the remote control body, and the hook I created. That, too, took a few iterations until I got it to fit right.

Next, I added the back tail of the cover, again with some level of iteration.

Finally, it all fit and closed over the remote. The only problem was, it didn't work. This was when I was reasonably convinced this whole project was a very bad idea. But it's also here that persistence was important.

I spent some time examining the remote. I tested the battery with the remote and no cover, and found that by holding the battery just so, it would fire the remote. This meant that the cover replacement I was making would not require any wiring to complete a circuit. It also told me that the changes I needed to make were really about how to hold the battery in the right place.

I added a flat circle spacer to push the battery down, and I also added another backing bar which pushed the battery forward into its contacts. This, as it turns out, was the winning design.

Unfortunately, it wasn't completely reliable. It did work, but not regularly. All that took was a few more iterations, eventually moving the back bar back just a tiny bit so the pressure was just right. Then it worked.

Here's the final piece. As you can see, it's not much larger than a penny.

I learned quite a few lessons in building this part, some of which may be valuable to you. First, let me reinforce that before I started learning about 3D printing about a year ago, I did not do mechanical constructions of any type. Yes, I have an engineering degree, but it's in computer science. I can design a circuit board. I can design a computer language and an operating system.

But fixing a bathroom sink? That's beyond my skill set. Creating a tiny replacement part for a fan? Before this year, you might as well have asked me to build a rocket in my backyard to travel to Mars. Not in my wheelhouse.

Now, however, I've learned that the process of creating objects like this is really a matter of observation, measurement, and patience, as I mentioned above. Once I mastered the basic skills of 123D Design (which, quite honestly, isn't much harder than PowerPoint or any other drawing program), I was on my way. If you can draw a rectangle, you can do basic 3D design.

I also learned that an inexpensive 3D printer can get the job done. It's not quite as clean an object as might be produced with a much more expensive printer, but it's good enough to do the job. I cleaned off some of the plastic detritus with a file and a pair of clippers. It works, which is all I really needed.

Finally, I learned that it's easy to do this over about two weeks time. In actual elapsed time, this project probably took me about four hands-on hours (not counting waiting for the printer). If I had to spend a weekend doing nothing by designing, printing, trying, tweaking, and doing it all over again, I would have gone completely around the bend. But because I put in just a few minutes when I felt like it, the project proceeded easily. It really was quite fun to do.

In addition to actually having my remote working again, there's a very interesting benefit to 3D printing a replacement part. I now have a virtual inventory. The 3D design model is now on my file server. If I lose the cover again (and I most certainly will), I can just load the file on my printer and reprint.

As we move forward into more 3D printing use, I predict we're going to find that virtual inventories become one of the bigger benefits of 3D printing across the board.

You can download this replacement fan remote cover from Thingiverse.

Is there a part you need a replacement for? Let me know what you think you might build in the TalkBacks below.