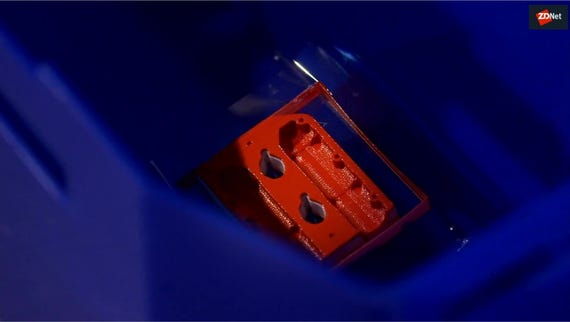 3D Systems on Monday is rolling out its latest multi-material 3D printer, a range of new software and new Stereolithography (SLA) materials.

Unveiled at the RAPID + TCT 2017 trade show in Pittsburgh, the new products should be useful for the manufacturing process in industries like aerospace, automotive, healthcare, dental, durable goods, and entertainment.

It comes with a 64-bit OS, a 10-inch display, and on-board capabilities to slice multiple builds simultaneously. Additionally, the system's multi-material capabilities enable customers to digitally blend rigid and elastomeric materials at the voxel level -- that opens it up to a wide range of applications, such as assemblies, rubber-like components, jigs and fixtures, and dies.

The ProJet MJP 5600 is expected to be available in June. For customers who already own 3D Systems' ProJet MJP 5500X, the company will offer an upgrade program that's slated to start in July.

3D Systems customer Amcor Rigid Plastic said that the new software has been, in some cases, 60-times faster when slicing a build in comparison to the previous version of the software.

The new software should be available this week.

Meanwhile, 3D Systems' new 3D hybrid design software, called Geomagic Freeform 2017, is aimed at helping customers solve complex design and manufacturing challenges in a single platform. For instance, Geomagic Freeform is well suited for designing the mass customization of parts, typically for production through additive manufacturing. Its new features include the ability to create 3D text labels or new design components that exactly fit or offset the surface of an existing model. This software should be available in June.

3D Systems also announced Monday that it's bundling its 3DXpert software with all of its direct metal printers. Additionally, 3DXpert is slated to include a new Build Simulation module that allows users to accurately verify and optimize their parts before sending them to print. The Build Simulation module should be available in the second half of 2017.

Lastly, 3D Systems on Monday announced two new SLA materials: Accura HPC (high-performance composite) for the ProX 800, as well as Accura Phoenix for the ProJet 6000 and 7000.