Full Bio
Posted in Between the Lines on October 24, 2017 | Topic: Innovation 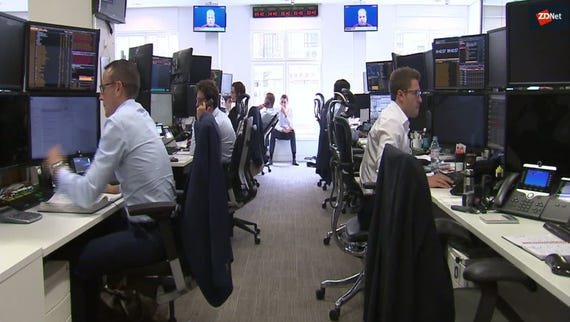 A new hard fork is due to take place imminently on the Blockchain network to create Bitcoin Gold, a cryptocurrency intended to bring trading back to decentralized roots.

The split is due to occur on October 24, after block 491,406 is mined. At this time, the Bitcoin Gold (BTG) protocol will launch.

We've had Bitcoin, Bitcoin Cash, and now Bitcoin Gold. In August, cryptocurrency traders were faced with the first Bitcoin network fork, which caused a chain split that made trading in Bitcoin and Bitcoin Cash possible.

At the time, users were warned to hold off trading as node disruption could result in Bitcoin being traded on an incompatible network, leading to lost funds.

No such disruption is expected for the Bitcoin Gold split, however. Instead, the new blockchain will be incompatible with the existing version of Bitcoin (BTC) after a "snapshot" is taken at the time of the fork, and mining machines will be limited.

ASICs will not be able to mine the digital currency, and the operators argue that this will help resolve present issues of decentralization.

By eradicating the use of powerful, expensive hardware required to mine Bitcoin, BTG aims to be more accessible to users worldwide. The cryptocurrency will be mined through the Equihash algorithm, which allows the average user to use their CPU power to mine. (This is the same algorithm used by cryptocurrency miners in websites if it sounds familiar.)

All owners of BTC will receive BTG at an exchange rate of one coin, per coin. Bitcoin funds will be untouched.

As the code cannot be reviewed, Coinbase wishes to keep the security of assets at the forefront, and so will hold off supporting the new fork -- at least, for now.

"Coinbase cannot support Bitcoin Gold because its developers have not made the code available to the public for review," Coindash says. "This is a major security risk."

"We will continue to monitor the development of Bitcoin Gold, and if its network proves to be both secure and valuable, Coinbase may decide to support it at a later date," the company added.

See also: JPMorgan calls Bitcoin 'fraud' only for use by criminals and North Koreans

While Coinbase will not support the system for now, if support is added, accounts will be credited with Bitcoin Gold at a later stage. Either way, Bitcoin funds remain safe.

The idea of a Bitcoin-based cryptocurrency which can be mined with less powerful PCs is a tempting one. However, many are skeptical that the project will be a success.

As there is a time lapse between the fork and the public release of mining software on November 1, unless users remain interested, network activity and trading may suffer.

In addition, concerns have been raised related to the algorithm being used. Satoshi Labs CEO Marek Palatinus noted on Twitter that competitive GPU chips can be few and far between, and others noted that by using GPUs, the problem of centralization isn't solved -- as it still can come down to power, type, and cost.

Trezor, a manufacturer of cryptocurrency wallets, will not support BTG at the moment.

"Bitcoin Gold's codebase is, at the moment of the writing, incomplete," Trezor says. "Most importantly, it lacks replay protection. For this reason, TREZOR Wallet will not support Bitcoin Gold yet, as it would endanger your bitcoins."

Poloniex, another exchange, will also not support Bitcoin Gold until the code is available for review.

Some interested parties on social media are calling BTG a scam; others claim the offering is innovation. It remains to be seen whether traders warm to the idea and make the latest fork a success.

At the time of writing, the Bitcoin Gold website is facing a distributed denial-of-service (DDoS) at a rate of 10 million requests per minute.

Watch your Bitcoin vanish: Blockchain split may be imminent

You will need to tread carefully in the coming weeks to avoid your funds disappearing.

The cryptocurrency has left our shores to join the world of satellites.