A sharkskin coating for ships, planes and blades

German researchers develop a paint that mimics the aerodynamics of shark scales. Could this mean smoother sailing for ships, soaring for planes, and spinning for wind turbines?
Written by Melissa Mahony, Contributor on May 24, 2010 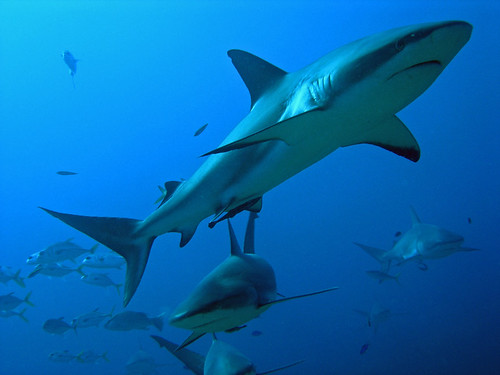 A few weeks ago, I wrote about bionic cargo ships, inspired by a hydrophobic fern, that would decrease a ship's drag as it cruises through the ocean. In another effort to make surfaces slicker, researchers from the Fraunhofer Institute for Manufacturing Engineering and Applied Materials Research (IFAM) are looking to sharks.

The ridged scales of sharks reduce friction between the animals and their watery surroundings. This helps sharks to swim swiftly and silently through the water. In short bursts, some sharks can reach more than 30 miles per hour with little effort.

Known as the "riblet effect," the hydrodynamic* advantage sharkskin may provide to seafaring vessels might also reduce resistance for objects gliding through the air, such as airplanes or the blades of windmills. [*edit]

German researchers have developed a paint that mimics the dermal dentricles, or placoid scales, of fast-swimming sharks. According to the scientists, the coating covers 3-dimensional surfaces easily and reduced friction by more than 5 percent in tests at a ship construction facility. Container ships transport about 90 percent of global trade from port to port and are big, heavy and huge fuel guzzlers. Over the course of a year, one large cargo ship could potentially save 2,000 tons of fuel.

Of course, there are some lifestyle differences between a shark and an airplane, a turbine, and a boat. So nanoparticles within the paint allow it to withstand ultra-violet radiation, temperature fluctuations (between -67 and 158 degrees Fahrenheit), and mechanical loads. Volkmar Stenzel in a statement:

Paint offers more advantages. It is applied as the outermost coating on the plane, so that no other layer of material is required. It adds no additional weight, and even when the airplane is stripped – about every five years, the paint has to be completely removed and reapplied – no additional costs are incurred.

By applying the paint to a plane via a stencil, the surface achieves the correct texture.

The next step for the researchers? Determining how to keep barnacles and algae from gumming on to ship hulls and gumming up the vessel's fuel efficiency.