ZDNet's Business Bargain Hunter scours the web for great deals on computers, phones, services and much more. Prices and availability are accurate at the time deals are shared. Some products and services may not be available outside the US. Follow BBH on Facebook and Twitter, where he's known as The Cheapskate. 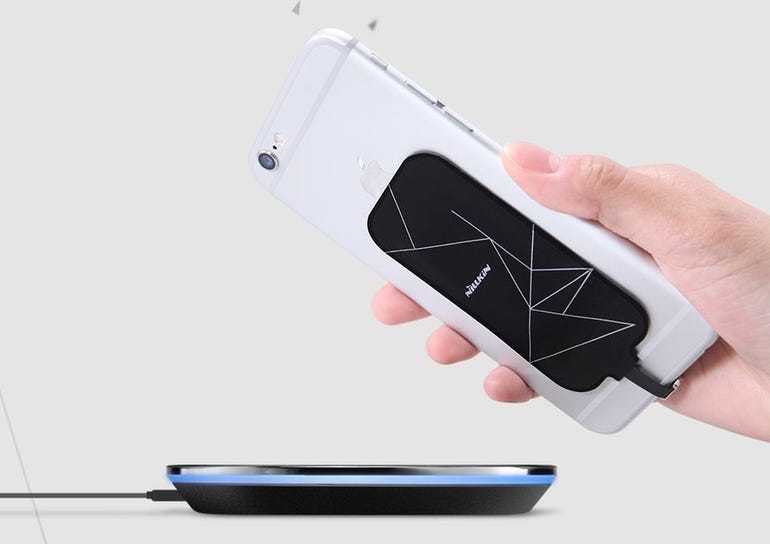 Wireless phone-charging has been around awhile, but it's a cause célèbre now that Apple has joined the party. Various Samsung and Motorola models can do the Qi thing; the iPhone 8 and iPhone X now support pad-power as well.

Basically, you're going to buy a wafer-thin Qi (pronounced "chee") receiver that plugs into your phone's charging port and wraps around the back. Then you just pop your case back on and presto: You've got Qi. Lay your phone on a compatible charging pad or stand and the juice starts flowing.

I've tried this with an iPhone 6s and a Motorola Moto X4; it worked flawlessly with both, though I do have a couple caveats.

First, the plug: Once it's inserted and you've got your case back on, it's hard to remove the plug without first removing the case.

And there will likely be times when you need access to that port, like when using a mobile charger. There's a hassle factor, to be sure.

Second, if you're a fan of magnetic phone mounts (like the one I recommended the other day), be prepared for disappointment: That rear-mount Qi receiver won't be able to receive juice when there's a metal mounting plate in the way. (The same problem exists for phones with built-in Qi charging.)

You can work around this by moving that plate way below center, down near the bottom of the phone, but then your phone may topple left or right while mounted.

Finally, if you have a really thick case, like an Otterbox, charging may be slow, inconsistent or just plain non-functional. The only way to find out is to try it.

Beyond that, this is an inexpensive plug-and-play way to see if you like Qi charging.

So, what Qi receiver should you get? There are countless options available, but I've had good luck with these adapters from Nillkin. They're currently priced at just $12.99, and there are versions available for Lightning, microUSB, and Type-C USB. (Make sure you choose a cable length that's a good match for your phone model.)

Oh, and don't forget a Qi charging station. Here's a really good one for your desk; it's all of $18.

What are your thoughts on wireless phone-charging, either built-in or aftermarket? Not everybody loves it; I think it's fantastic for desk and nightstand charging, less fantastic for cars and travel.