Dutch computer scientist Max Welling has become a respected artificial-intelligence researcher in his own right, but one detail on his résumé makes him truly stand out from the crowd. He is a former student of Geoffrey Hinton, one of the founding researchers of Google's deep learning division.

The large tech companies have mined Hinton's roster of former associates and students, who include leading lights such as Yann LeCun and Zoubin Ghahramani, to beef up their own machine-learning teams.

In March, Uber appointed Ghahramani as chief scientist at its new AI Labs, which it formed in December 2016 when it acquired Ghahramani's and his colleague Gary Marcus's startup, Geometric Intelligence. 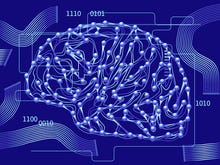 Inside the black box: Understanding AI decision-making Artificial intelligence algorithms are increasingly influential in peoples' lives, but their inner workings are often opaque. We examine why, and explore what's being done about it.

In late 2013, Facebook recruited LeCun, a former research associate of Hinton's, as its director of artificial intelligence.

Now, German engineering and electronics giant Bosch has partnered with Welling and his colleagues at the University of Amsterdam to open a joint research lab, called Deep Learning Technologies Amsterdam, or Delta Lab.

Bosch has also just announced a partnership with Daimler to introduce driverless cars by 2021. Bosch has been conducting AI research at its new Center for Artificial Intelligence, which opened at the beginning of this year.

At the end of last year, Bosch pledged €7m ($7.6m) to support machine-learning research through a new consortium of carmakers, universities, and other companies, including Facebook, in southwest Germany.

Welling and his colleague Arnold Smeulders will lead the new Delta Lab in Amsterdam, which will conduct joint research with Bosch's Center for Artificial Intelligence in Renningen, Germany.

Bosch has pledged €3m ($3.3m) to fund 10 doctoral and post-doctoral positions at the new Amsterdam lab over four years. The incumbents will periodically travel to Renningen to work with Bosch researchers.

Alongside its Renningen campus, the Bosch Center for Artificial Intelligence maintains two satellite sites in Palo Alto and Bengaluru, India.

Other tech companies are seeing the merits of setting up remote AI research labs, to move to where the researchers are. In March, the Vector Institute for Artificial Intelligence opened in Toronto.

It is a public-private consortium that is aimed at giving foreign tech companies a site where they can work with Canadian AI experts as well as fostering homegrown AI businesses.

And last year, Google established a machine-learning research center in Zurich, where DeepDream was conceived.

"I'm very much looking forward to working with professor Max Welling and his team from the University of Amsterdam. Worldwide, he's one of the leading names in the field of deep learning."

Welling is the machine-learning research chair at the University of Amsterdam but he regularly joins forces with AI researchers in North America. He is also a professor at the University of California at Irvine, a consultant for Google's London-based DeepMind, and is a senior fellow the Canadian Institute for Advanced Research. In 2005, Welling won a National Science Foundation Career Grant for his work in machine learning.

From 2001 to 2003, Welling worked as a post-doctoral fellow under Hinton at the University of Toronto. During that time, Welling and Hinton co-authored several papers together on machine learning and computer vision.

The Canadian connection is not lost on the new Delta Lab. Welling invited University of Toronto computer science professor Raquel Urtasun to give a talk at Delta Lab's opening ceremony in early April.

The Qualcomm-University of Amsterdam lab is geared toward transferring machine-learning research into technology for Qualcomm's products. Delta Lab's mission is similar.

"We hope the research findings from Delta Lab will result in applications and products in which Bosch is a global market leader."

Delta Lab's opening is just one more development in Welling's quest to nurture the Netherlands' artificial-intelligence community. He is currently on the lecture circuit and recently gave a pair of talks at the University of Utrecht over the societal impact of artificial intelligence.

Join Discussion for: Affordable driverless cars: How Bosch is...