After COVID-19, what happens to the grocery industry?

The global pandemic thrust the grocery industry into a slap-dash digital transformation effort. Once the crisis is over, stores will need a modern, safe way to revive brick-and-mortar shopping, says Grabango CEO Will Glaser.
Written by Stephanie Condon, Senior Staff Writer on April 24, 2020 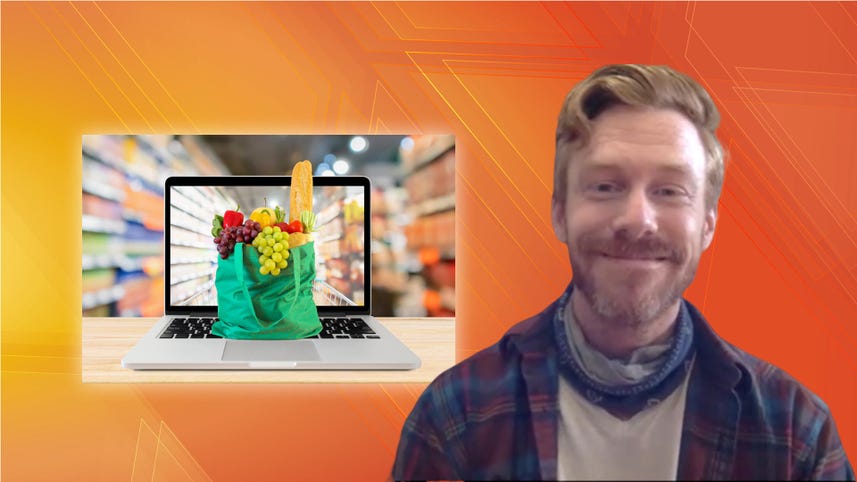 Since the COVID-19 outbreak began in the US, online grocery sales have surged. For many shoppers weighing the risk of exposure in heavily-trafficked locations like grocery stores, online purchasing has finally become worth the added expense. While delivery platforms like Instacart scramble to hire new workers, grocery chains are hastily revamping digital and physical operations to adjust to the current reality.

At some point, however, the crisis will begin to subside, and stores will re-open. Shoppers are likely to have different expectations, and grocers will find themselves in a changed market.

Online grocery shopping will "pick up, for sure," said Will Glaser, founder and CEO of Grabango, which uses AI and other technologies to build checkout-free systems for grocery stores.

Digital purchasing may, in the long-run, account for 4 or 6 percent of grocery sales, he said, but it's unlikely to remain at current levels, with 10 percent of shoppers buying groceries online.

"That's just an unrealistic way for people to spend their money," Glaser said. "My expectation is a lot of decision-making out in the real world is done economically, by people trying to make their paycheck stretch as far as possible."

It's impossible to say at this point what that means for the grocery business, which has long been a target for digital disruption. Glaser spoke with ZDNet about where the industry is headed and how its trajectory may change under the current conditions.

While the grocery industry hasn't embraced modernization efforts at the same pace as other sectors, that doesn't mean it isn't forward looking, Glaser said.

"Retail, and grocery retail in particular, is a very thin-margin business," he said. "A lot of money comes in the front door, and most of it pays for the groceries that come in the back door.

"There's not a lot of extra money lying around the company," Glaser continued. Consequently, "they're very conservative -- cash conservative. A lot of other businesses have the luxury of running experiments and investing heavily in forward-looking projects... Grocery is so focused on profit on a thin margin. There have been other retail technology initiatives before Grabango, and they didn't work... because they didn't affect the bottom line."

The grocery market is extremely price-sensitive, Glaser added, which is part of the reason that -- up until now -- online shopping accounted for less than 5 percent of sales. Paying for drivers, digital infrastructure and other expenses becomes too costly, he said, when it's nearly impossible to pass any of those costs onto consumers without losing market share.

"It's really hard to believe a 10 or 15 percent cost shift will be borne out by consumers," he said. "I don't think groceries are going online anytime soon."

Leveraging AI and fault-tolerant hardware to change the equation

Grabango -- as well as a number of other startups like Zippin, Standard Cognition, Grabango and Trigo -- are taking a different approach, leveraging quickly-advancing technologies like computer vision to eliminate grocery checkout lines.

"Our really high-level goal is to partner with established retailers at large scale to eliminate lines and save time," Glaser said.

The company installs overhead sensors in a store, which use advanced machine learning and computer vision algorithms to monitor the location every item in the store. The system's fault-tolerant architecture is key to its success, Glaser said. With razor-thin margins on the line, even five minutes offline can be "catastrophic," he said.

Monitoring inventory -- keeping track of its movement off the shelf and out of the store -- can help the bottom line by reducing shoplifting, Grabango contends, which is a serious problem for the industry. Grabango says its system charges shoppers for all items they have on their person, even if it's hidden from view.

Meanwhile, the system is ultimately designed to make the customer happier with less time waiting in line. Customers have the option of downloading an app, so they can just walk out of a store with their purchases and see the charges show up on their credit card. Those who don't want to bother with the app -- or who want to pay with cash, food stamp benefits via an EBT card, or any other kind of tender-- can go to a checkout station, where the Grabango system will tell a cashier how much they owe.

"We're cognizant not everyone is a creature of Silicon Valley," Glaser said. "We worked really hard to build a system... that can bring along all of society with us."

Currently, Grabango has pilot operations running with three major retailers. Its partnership with the Giant Eagle chain is the only publicly-announced Grabango installation. So far, Giant Eagle has tested the system with its own employees, and it plans to extend the pilot program to all shoppers at its trial location later this year.

A safe alternative to standing in line

So far, the pandemic hasn't really impacted Grabango's operations, Glaser said. The vast majority of the company's team can work from home. Even its store deployments remain feasible, with a small number of people installing sensors in stores late at night, to disrupt shopping as little as possible.

"We're doing them carefully to abide by social distancing, but they're not substantially slowed down," Glaser said.

It's unclear how the pandemic may change the industry's path forward, but Glaser said that anecdotally, the crisis seems to have underscored the value of a checkout-free system.

"The CEO of a major retailer, who's not yet our customer, sent me an email saying, 'I wish your technology was in every one of our stores today,'" he said. "Stores are getting harder to run. Keeping people in line and maintaining social distancing while they're standing in lines that are longer than they've been is really a challenge."

"Managing inventory is a thing that's hard to do well," he said. "The supply chain is reacting very well, and grocery stores are pretty well stocked again, but the supply chain leanness --which is another word for efficiency -- reacted poorly to the surge in demand for a couple of weeks. We're not fixing any of that, but we do fix the last mile of getting it from the truck to the consumer much more efficiently by giving intelligence to the store."

While Grabango's business is just getting started, it's already facing some intimidating competition. Amazon earlier this year announced that it is now offering its "Just Walk Out" technology to retailers for use in their stores. The technology, which powers the cashier-less Amazon Go stores, lets customers pick up what they want in a store and walk out, without the need for a checkout line.

Glaser said Amazon is an indirect competitor, since they're going after different segments of the industry and offer somewhat different technology. While Grabango is targeting large chains that want to retrofit their existing stores, Amazon's technology is designed for new stores or complete rebuilds, Glaser said. It's also better suited for stores with smaller inventories, unlike large chains like Giant Eagle.

That said, Glaser added, "Whenever you're competing with Amazon, you have to make sure you're staying awake."

AI & Robotics
NSA, CISA say: Don't block PowerShell, here's what to do instead

Security
Amazon Fire TV Stick: What it is and how to use it