Full Bio
Posted in Robotics on April 28, 2020 | Topic: Coronavirus: Business and technology in a pandemic 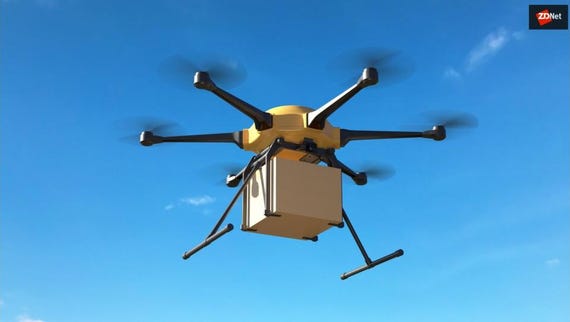 Last August, long before the first murmurings of COVID-19, the U.S. got its first taste of drone delivery when the FAA began issuing wavers to circumvent current restrictions limiting commercial drone use. The waivers are part of the FAA's UAS Integration Pilot Program (IPP), which is designed to bring state, local, and tribal governments together with drone operators and manufacturers to accelerate safe commercial drone integration.

The program has been a springboard for drone manufacturers and service providers to proof a concept that's been a long time coming: that drones can safely and reliably deliver food and goods to households. With the onset of a global pandemic and social distancing now the norm, the program has taken on new urgency while providing a unique proving grounds for an application that's suddenly become much more than the gimmick.

Admittedly, we're still in the baby steps phase here, and this is far from a massive nationwide rollout. Takeoffs will occur across the street from a local shopping supercenter that will supply provisions. During initial stages of the pilot program, deliveries will be offered to a select number of area households which have opted-in to the service.

But the service does represent a step toward larger scale drone delivery at a uniquely perfect time for the technology to emerge from the regulatory shadows.

"With COVID-19 threatening the wellbeing of our community, our businesses, and our way of life, we are committed to easing the burden on our citizens by leveraging unique resources in this time of crisis," says Grand Forks Mayor Michael R. Brown. "With innovation in our community's nature, we are proud to spearhead the use of drones to ensure the health and welfare of our citizens. With the help of Flytrex and EASE Drones, we are deploying UAVs to limit unnecessary exposure to the coronavirus. We hope other communities will follow."

"UAVs offer safe, swift, and efficient delivery of much needed goods with no risk of unnecessary human contact for consumers," explains Flytrex CEO Yariv Bash. "We hope this initiative will alleviate hardships for as many of the people of Grand Forks as possible and help keep them safe and provided for."

The U.S. has been slower than many other countries to begin testing drone delivery. Flytrex began direct-to-consumer aerial delivery in 2017 in Reykjavich, Iceland, which it says was the first service of its kind anywhere in the world.

Grand Forks, for its part, has emerged as a uniquely forward-thinking community. In 2018, the city first teamed up with Flytrex and EASE to test drone delivery at a local golf course where restricted access enabled administrators to collect waivers from golfers. One of the major sticking points in current FAA regulations with respect to drone deliveries is that service providers cannot fly over non-participants, which isn't practical in public settings. The FAA's Rule 107, which regulates commercial drone operations, also limits drone missions to those that remain in line-of-sight of the pilot, which isn't conducive to deliveries.

Testbed exemptions like the one in North Dakota represent an important moment for the industry. From these humble beginnings could grow an entirely new service sector.

"Following our launch in Grand Forks, with the continuing cooperation of local authorities and the FAA, we aim to expand our drone delivery service to help citizens in other areas of the town, the state, and the entire country – as quickly as possible," says Flytrex's Bash.