Tokyo-based startup Infostellar has announced raising $7.3 million in a Series A round led by the venture-capital arm of aerospace company Airbus, with participation from WERU Investment, D4V, and Sony Innovation Fund, as well as existing investors FreakOut Holdings and 500 Startups Japan.

The latest round brings the total funds raised by the startup to $8.3 million.

Infostellar, founded by Naomi Kurahara and Kazuo Ishigame in January last year, said it will use the funds to launch its flagship satellite antenna-sharing platform StellarStation, expand its network of partner antennas, and hire talent.

Dubbed as the "Airbnb for satellites", StellarStation acts as a connector between antenna holders with satellite operators.

It evaluates antenna specs and data transmission history, displaying the most viable antennas for a specific satellite. Users can book a transmission window that automatically begins once the satellite is in range.

The platform also processes data to ensure it is received in a usable form, and all operations are presented to the user in a graphic interface.

Users can share their antenna's idling time and receive credits, then use those credits to access other antennas in the network or exchange credits for cash.

"With the burgeoning number of Low Earth Orbit launches and the fast-evolving criticality of data from space, supporting ground station networks are becoming hard pressed to keep up with satellite data demands -- despite the irony that much of the time ground station antennas stand idle while other people's satellites pass overhead," said Dr Lewis Pinault, managing investment partner for Airbus Ventures in Japan, who has joined Infostellar's board of directors.

"Infostellar dramatically shifts the model -- they can bring many hundreds of antennas around the globe to the service of thousands of satellites. With their StellarStation solution, everyone in the equation can win: antenna operators idle less and earn more, and satellite operators gain real-time network-side control -- and virtually anyone can become a satellite operator."

StellarStation will be launched in closed beta in October.

In June, the Japan Aerospace Exploration Agency (JAXA) and Mitsubishi Heavy Industries launched an H-IIA Launch Vehicle from the Tanegashima Space Center, located on an island south of Kyushu, carrying a satellite that will form part of a Japanese GPS.

Japan currently relies on the United States' Global Positioning System. Having its own system is expected to reduce location errors in Japan from as much as 10 metres to a few centimetres, by some estimates.

Three satellites will be visible at all times from the Asia-Pacific region, and the Japanese system could be integrated with the American one, enabling highly precise positioning, the Japanese government said.

Japan is considering adding three more satellites to the system in the future, as mountains and tall buildings will still affect the positioning under the four-satellite system.

Back in February, a team of researchers from Hiroshima University, the National Institute of Information and Communications Technology (NICT), and Panasonic announced it had developed a terahertz transmitter that can send data at 100 gigabits a second over a single channel in the 300GHz band, showing promise that satellite links like the ones planned by Elon Musk's Space X could deliver fibre speeds.

NICT said these speeds are about 10 times faster than what's expected on 5G networks due to come online in 2020, and could allow for faster in-flight network connections, faster downloads to mobile devices, and ultra-fast wireless links between base stations. 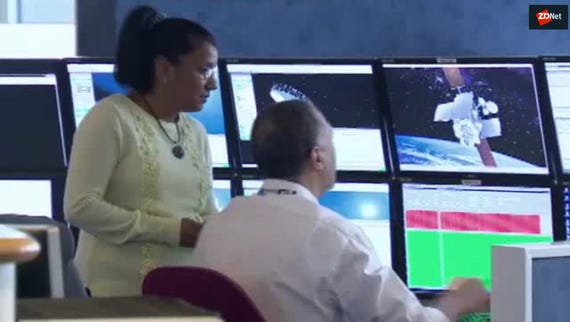