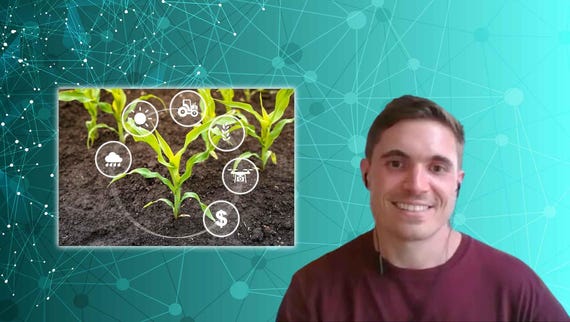 Alphabet's X lab for emerging technologies, also known as "moonshot factory", has unveiled yet another initiative that might improve the future content of our plates.

The research company, formerly Google X, has developed Project Mineral, which is an attempt to tackle the challenges that the food industry is bracing for in the near-term – namely, how to improve agriculture's productivity in the face of increasing demand and weaker crops.

Using a wheel-mounted buggy fitted with a cocktail of cameras, machine-perception tools and AI, the X team is roaming fields to provide growers with high-quality and data-based information about their crops. Armed with clearer insights, farmers can in turn make decisions based on a better understanding of their plants' behavior.

Announcing Project Mineral in a blog post, Elliott Grant, who leads the project, explained that he has spent the past few years talking to farmers across the world to assess their needs. "What's changed recently is their sense of urgency and an awareness that current tools aren't equipping farmers to face these challenges," he said.

It is expected that to feed the world's population, agriculture will need to produce more food in the next 50 years than in the previous 10,000. It is no wonder, in that context, that farmers feel that the current tools at their disposal won't be up to the challenge. To understand and manage their crops, growers typically rely on sensors, spreadsheets and GPS tools that gather data in a siloed way, barring them from achieving a comprehensive picture of their fields.

Without access to the right data, growers have had no choice but to standardize the way they grow. Crops are treated uniformly, which means that fertilizers and pesticides are often used unnecessarily, while at the same time depleting the soil's health.

"What if every single plant could be monitored and given exactly the nutrition it needed?" asked Grant. "What if we could measure the subtle ways a plant responds to its environment? What if we could match a crop variety to a parcel of land for optimum sustainability?"

Understanding how each individual plant grows, according to the project lead, would let farmers appropriately reduce fertilizers, chemicals and even water, while also improving crop management and increasing yield.

In order to, in Grant's words, "manage the plant instead of the plot", the Project Mineral team developed a prototype plant buggy that can roll through the fields to inspect the crops, gather high-quality pictures and provide relevant data points back to the grower.

The very first buggy was mounted on two bicycles, and used Pixel 2 phones to photograph individual plants. From there, the prototype evolved to be able to handle conditions like muddy fields or bright sunlight, and to include remote-control. The current version of the buggy is equipped with solar panels and designed to roll through fields and over different types of crops.

Onboard the buggy, GPS software identifies the precise location of plants in the field, while sophisticated cameras and sensors can identify specific plant traits. The robot can, therefore, carry out tasks that humans couldn't, such as counting the individual buds on every raspberry cane.

A few months ago, the Project Mineral team gave a snapshot of the buggy's work in the field, sharing on Twitter how the prototype could tap AI models to count how many soybeans were growing above ground.

Coasting through fields across the US during the past months, the Mineral buggy has been counting and classifying crops, and growing a sprout-to-harvest dataset that now covers melons, berries, lettuce, oilseeds, oats and barley.

On top of capturing images of the plants, the robot can also pick up on relevant information, such as identifying diseased leaves that are likely to spoil the whole crop. The buggy can also re-create 3D versions of the plant, so that farmers can measure biomass and maturity, and anticipate the size and yield of their crop.

Combining the millions of images from the robot with satellite imagery, weather data and soil information, farmers can garner a much better picture of their plot. They can target individual plants that might need treatment, rather than entire fields, which has a direct impact on costs and soil health.

For Grant, Project Mineral reflects the rise of a whole new field of technology, called computational agriculture. "Farmers, breeders, agronomists, and scientists will lean on new types of hardware, software and sensors to collect and analyze information about the complexity of the plant world," he explained.

This could unlock new opportunities for farmers, such as growing new crops that aren't currently cultivated, or exploring techniques like intercropping – growing multiple crops together – a technique which is more complex but is proven to be less damaging to the environment.

Project Mineral is only the latest in a series of initiatives launched by the X factory, which have been met with mixed success. The company is where Waymo's self-driving cars started, but X is also behind the moderately popular Google Glass.

Recently, the company announced an underwater fish-tracking project to improve the understanding of the ocean, and it also launched high-altitude broadband balloons in Kenya.

Join Discussion for: Alphabet X has a crop-watching robot that...