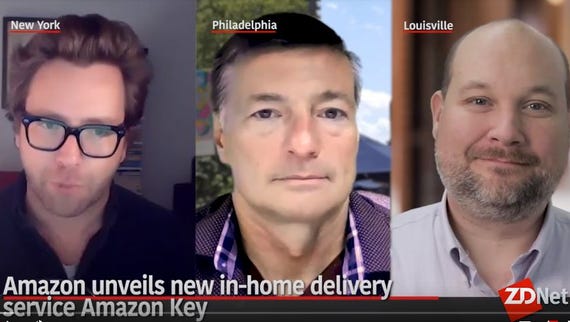 The Seattle-based tech giant posted net income of $256 million in the third quarter, or 52 cents per diluted share. Revenues came to $43.7 billion, up 34 percent year-over-year. Revenues include $1.3 billion from Whole Foods Market, which Amazon acquired for $13.7 billion in late August.

A year prior, the company reported earnings of 52 cents per share on revenue of $32.71 billion.

Wall Street was looking for earnings of 3 cents per share on revenue of $42.14 billion.

While Amazon Web Services remains a relatively small segment of Amazon's business in terms of net sales, it accounts for a huge portion of Amzon's profits. AWS net sales came to $4.58 billion for the quarter and delivered operating income of $1.17 billion. The segment managed to grow year-over-year at a healthy pace of 42 percent, even as competition from Microsoft and Google continues to grow.

On a conference call Thursday afternoon, Amazon executives noted that the AWS run rate now stands at $18 billion, up from $16 billion in the prior quarter. While revenue is growing at a fast clip, usage is growing faster, executives said, thanks to both new customers and additional workloads from existing customers.

In a statement, CEO Jeff Bezos touted the company's "Alexa everywhere" strategy. Customers have purchased tens of millions of Alexa-enabled devices, he noted, with active Echo customers up more than 5x since the same time last year.

"In the last month alone, we've launched five new Alexa-enabled devices, introduced Alexa in India, announced integration with BMW, surpassed 25,000 skills, integrated Alexa with Sonos speakers, taught Alexa to distinguish between two voices, and more," he said. "Because Alexa's brain is in the AWS cloud, her new abilities are available to all Echo customers, not just those who buy a new device."

The slew of Alexa-enabled devices on the market should be contributing to North American revenues. Sales in the segment came to $25.45 billion, representing 35 percent growth. North American operating income for the quarter came to $112 million.

While Amazon continues to grow its North American business, Walmart remains a strong competitor. Earlier this month, the retailer said it expects its US ecommerce business to grow sales by roughly 40 percent in the upcoming fiscal year as it continues to shift resources in that direction.

For Q4 2017, the company is projecting net sales between $56 billion and $60.5 billion, which would represent a growth rate between 28 percent and 38 percent.

Join Discussion for: Amazon sales up 34 percent in Q3