The battle for the future of local delivery is being waged one pepperoni pizza and Prime parcel at a time. Round one goes to the underdog.
Written by Greg Nichols, Contributor on Jan. 24, 2019 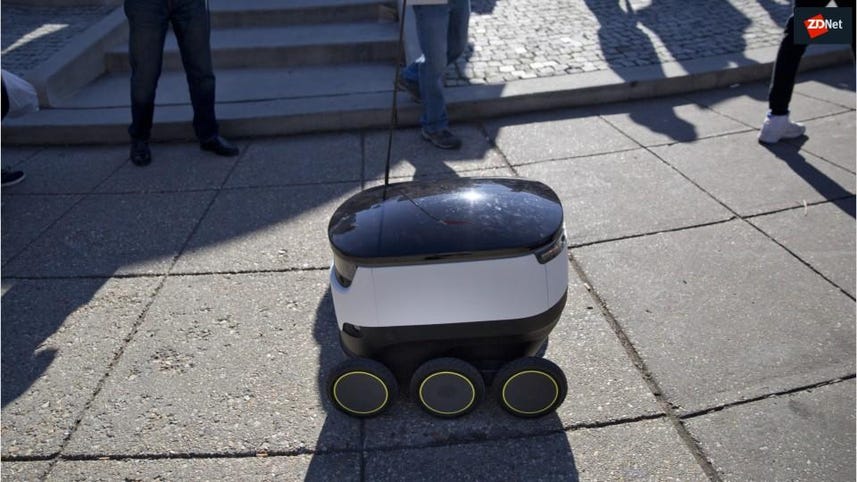 For those who still doubt the future of last-mile delivery belongs to robots, this must have been a jolting week. First, Starship Technologies, a robotics firm founded in 2014 by Skype co-founders Ahti Heinla and Janus Friis, announced its robots would begin delivering food to dorm rooms at George Mason University in Maryland. Now Amazon, the company with perhaps the most to immediately gain or lose by how it responds to the competition nipping on its heels in the fast delivery game, has announced its own rolling robot.

The Amazon robot is named Scout. As my ZDNet colleague reported, six of them are being trialed in a small testbed in Washington State. Like many other delivery bot trials, Scout will be accompanied by a human chaperone. It will work Monday through Friday during daylight hours and will stick to sidewalks. It will only service Prime customers, of course, and presumably there was an opt-in campaign.

Scout walks at a human pace and appears large enough to accommodate small and medium-sized parcels. No word yet what's under the hood, but the standard sensor package in autonomous mobile robots includes GPS, several cameras or stereo cameras, inertial measuring devices, and occasionally LiDAR.

Amazon's bot is no doubt a technological marvel, but the surprising thing here is how late the company is to the local delivery party. Amazon became a robotics powerhouse with its 2012 acquisition of Kiva, and future success will be predicated on innovating to stay ahead in the delivery game. Yet this is Amazon's first deployment of ground robots, and it's a small one. In case you missed the founding date in the lede, Starship Technologies, which makes its own six-wheeled delivery robot, has been after local delivery since 2014. Like autonomous car companies, robotics outfits flaunt distance driven like a badge of honor. Starship has logged well over 100,000 kilometers. The company also has testbeds around the world, including on the streets of London.

The latest rollout on the campus of an American university comes in partnership with food services provider Sodexo, Inc. Mason's 40,000 students and faculty can use an iOS or Android app to order food and drinks from places like Blaze Pizza and Dunkin'.

In my day we braved the harsh light of day for hangover food. (Grumble grumble.)

"College students understand the benefits of technology on campus and expect it to be integrated into their daily lives," said Ryan Tuohy, SVP, Business Development, Starship Technologies. "Students and teachers have little free time as it is, so there is a convenience for them to have their food, groceries and packages delivered to them."

Putting aside the alarming state of college campuses, where students and faculty are evidently too stressed to grab some food, this is a big deal. It's an autonomous delivery implementation in a massive real-world laboratory, and it seems the folks behind it have every intention of making some coin. The on-demand service will cost $1.99 per delivery, and Starship has deployed 25 robots at launch, making this likely the largest autonomous food delivery implementation ever. No chaperones, no hand-holding.

It's a sign of how far along Starship is, and an indication that Amazon has a lot of deliveries to go before it catches up. It's also an indication that autonomous delivery is currently better suited to some environments than others. A university campus is ideal for delivery. It's predictably laid out, residents are clustered together, its small enough that technicians can reach deployed to robots in the field in minutes, and it's a heavily policed environment, reducing the likelihood of vandalism.

Most autonomous delivery outfits are contending with issues of unpredictability in the real world -- massive potholes encountered crossing the street, vandalism, negative reactions from pedestrians. Those can be largely mitigated in highly planned environments full of young, tech-savvy customers.

Regulation, the other major hurdle to implementation, is also easier to tackle in this case. Where municipalities have regulated for ground robots, they've usually done so after bad experiences and as a way to strictly limit how robots can be deployed, which is the case in San Francisco. Most communities around the country haven't put regulations in place yet, which means real-world deployments by companies like Amazon would likely first require a lot of education and campaigning to prevent swift action by peeved politicians. (Uber and Bird, the scooter company, present an alternative path, which is to break the system first, then apologize/lawyer up.)

Starship is clearly chipping away at public opinion and winning consumer confidence one implementation at a time. College administrators eager to help their school stand out as pioneering are soft targets. And students have parents and friends, making this a great publicity play. It's a safe bet tens of thousands of teens and twenty-somethings are going to be spreading the word about the robots on their campus over spring break.

Amazon is a formidable player in any arena it chooses to play in, of course, and it's accustomed to winning. But it's trailing in the technology department this time, and that's setting up an interesting clash. It seems likely autonomous delivery will become available to brick and mortar stores, chain restaurants, and even mom and pops via robot-as-a-service startups, and that that's going to happen at the same time as or sooner than Amazon is able to deploy its own robot delivery minions widely.

If that negatively impacts Amazon's delivery dominance, many will look back and wonder why it took Bezos and company so long to get rolling on six wheels.