Only six Scout robots are currently being tested in a single neighborhood in Snohomish County, Washington.
Written by Natalie Gagliordi on Jan. 23, 2019 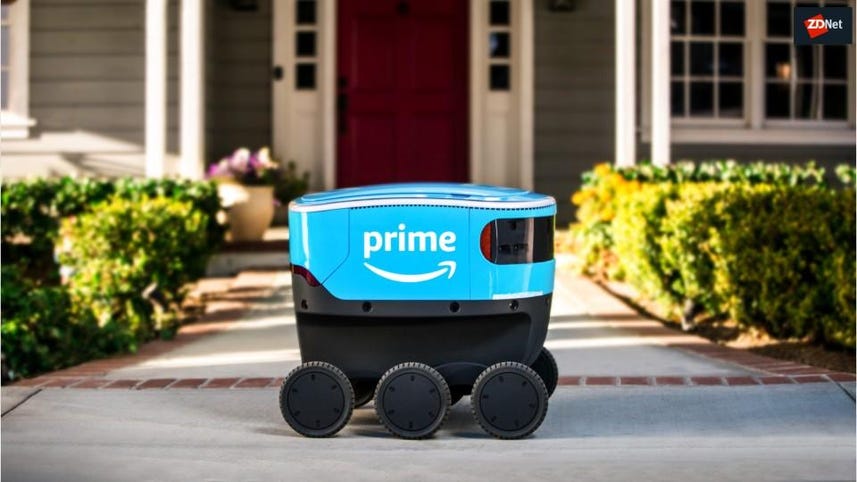 Amazon has revealed its latest autonomous delivery project -- a six-wheeled boxy robot named Amazon Scout. The e-commerce giant said the all-electric devices were created in-house at Amazon's research and development lab in Seattle, and are about the size of a small cooler.

The bots are meant to travel on sidewalks at an average walking pace, delivering packages "in daylight hours" between Monday and Friday.

Only six Scout delivery robots are currently being tested in a single neighborhood in Snohomish County, Washington. According to Amazon, human supervisors will accompany the robots during the early stages of the trial to ensure that the devices can properly navigate around obstacles like people and pets.

With the addition of Scout, Amazon's ambitious delivery plans now run the gamut of logistics methods, from autonomous drones to a Prime-branded cargo plane fleet. The drone delivery service -- initially launched in 2013 -- remains in testing and hasn't made much mass market progress as of late, but there's no sign that the company is scrapping the effort in favor of these little land robots. But considering the vast safety and regulatory hurdles still plaguing Prime Air, it's likely that we'll see Scout robots on the streets long before Prime drones take flight.

Meanwhile, the Scout robots could also help Amazon ween off of carriers like UPS, FedEx and USPS for last mile logistics. Amazon historically has optimized its supply chain, distribution and logistics and then handed off last mile services to carriers. However, shipping is a massive expense for Amazon, and that has fueled the company's efforts to develop new delivery methods.