A steady succession of leaks has given a fairly good indication of what Amazon is going to reveal at an event later this week: a smartphone with some kind of 3D technology and a novel form of gesture control and navigation.

But, if the forthcoming smartphone follows the model that Amazon pioneered with the Kindle ebook reader and then applied to its Kindle Fire tablets, the hardware (however nice it is) is really only a wrapper for a new channel to selling Amazon services.

With the Kindle Fire, for example , Amazon forked Android to add its own features such as the impressive 'mayday' button (which summons Amazon's live onscreen technical support). Forking Android also allows Amazon to bend the OS to its own ecosystem — its app store, video, and of course shopping businesses. 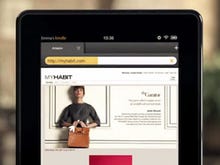 Rumors that the retail giant is building a smartphone first surfaced more than a year ago. A new report suggests a smartphone with a 3D screen may be on deck.

Amazon's strategy isn't about making money out of the hardware itself; that's not the point. The point is to lock the customer in to its shopping and content ecosystem. And that ecosystem continues to grow steadily. Last week, Amazon added a music streaming service to Amazon Prime — a service that would fit in very nicely if you were about to launch a new smartphone.

It's almost certain Amazon is going to stick with the same playbook here: solid hardware at a good price, a phone that works best when plugged into an Amazon Prime subscription.

The question remains, though — can Amazon make itself a force to be reckoned with in the mobile market?

While its strategy with the Kindle Fire makes sense, it hasn't been a runaway success so far. IDC thinks around one million Amazon tablets shipped in the first quarter of this year, giving it a two percent share of total shipments in a slowing market. In the same quarter, Apple shipped 16 million tablets, and Samsung 11 million.

As our review pointed out at the time, some find the all-encompassing Amazon ecosystem reassuring. For others, it is somewhat claustrophobic . How well Amazon has persuaded those Fire owners to take up Amazon Prime is impossible to tell from the outside, making it hard to judge the device's real success — and whether the smartphone will go the same way.

Right now, smartphones are a much bigger opportunity than tablets, especially phablets which are more comfortable for watching video than smaller-screened smartphones. IDC predicts that 245 million tablets will be shipped this year, compared to 1.2 billion smartphones. The mobile handset market is also more fluid and more open than the tablet market — as shown by the gradual improvement in Windows Phone's market share recently — so Amazon may find it easier to make a breakthrough.

Coming in at a more than competitive price will be essential to the device's prospects, just as it has been with the Kindle Fire. And here another point in Amazon's favour is that it's now entirely possible to build a low-cost but high-spec smartphone as long as you don't need every (mostly unused) hardware novelty packed in.

With the Kindle Fire, Amazon aimed for the sort of buyer who is more interested in whether they can get books by their favourite author or watch their favourite TV show than those who might care about the intricacies of which particular operating system their handset runs.

But it's also worth noting that for all the excitement 3D has been tried before with limited success in other phones. Later this week, we'll find out if Amazon has made a truly remarkable breakthrough. Still, while 3D is cute (and Amazon's teaser video is a lot of fun) its not the only thing that Amazon has on its side here.

That Amazon is finally deciding to enter the market shows how commoditised the smartphone market has become. Perhaps for smartphone buyers underwhelmed by the gradual iterations seen in the most recent iPhones and Galaxy S flagships, a little 3D magic might be enough for them to look again.

Join Discussion for: Amazon's smartphone: One reason why it could...