Apple sold about 14 million iPhones to former Android owners in the last quarter -- and that's a sign of good times ahead, according to Apple chief Tim Cook.

Despite a strong US dollar that's likely to dampen tech sales over the holiday season, Cook told analysts at Apple's Q4 earnings update on Tuesday he's confident the company can beat the record-breaking 74.5 million units sold during the Christmas period last year.

"We believe that iPhone will grow in Q1 and we base that on what we are seeing from an [Android] switcher point of view," Cook said, according to a Seeking Alpha transcript.

iPhone sales for the fourth quarter reached 48.04 million, up from 39.2 million in the same quarter last year.

The reason Cook's confident Apple can beat last year's Q1 sales is that Apple saw record levels of former Android owners making the switch to an iPhone. These "Android switchers" accounted for 30 percent of iPhone sales in the last quarter, buying 14.4 million handsets. 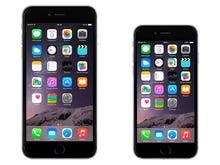 Android to Apple switchers fuelling iPhone growth in Europe as Windows Phone jumps Android switchers are giving iPhone sales a boost as Apple gears up to unveil the next iPhones in the coming days.

"That number is the largest that we've ever recorded since we began measuring it three or so years ago," said Cook.

For the past two quarters Cook has highlighted record-breaking switcher rates from Android, but this is the first time Apple has provided an actual figure. Some of these switchers would have been helped to make the transition by Apple's 'Move to iOS' app for Android devices.

Market research firm Kantar Worldpanel ComTech estimated that Android to iOS switchers accounted for 27 percent of iPhone sales in Europe's big five markets in the three months to July, and a much lower proportion in the US, where the rate was just nine percent.

The other reason for Cook to be upbeat about the coming quarter -- typically the biggest of the year due to holiday shopping -- is that the share of iPhone owners who have upgraded to at least the iPhone 6 or 6 Plus remains at just 31 percent. That means 69 percent of iPhone owners didn't bother to upgrade this year, offering Apple a large number of existing iPhone owners to convert to the latest devices, said Cook.

"So we feel like we have a very open field in front of us," said Cook.

Cook said the impact of Apple's recently launched iPhone upgrade plan for the US was "relatively small" compared to worldwide iPhone sales. The program allows buyers to upgrade to a new iPhone after 12 instalments, but is not available directly from Apple outside of the US.

He did not say whether Apple planned to roll out the program to other markets but noted that similar plans were offered in over a dozen other countries.

Join Discussion for: ​Apple CEO: Android to iPhone switchers will...